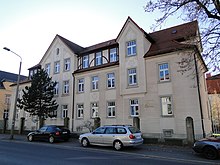 Double dwelling at Coschützer Strasse 54/56 in Dresden, built by Schilling & Graebner in 1902 for the Dresdner Spar- und Bauverein

City Villa : Subsidized social housing in the Berlin Rauchstraße, by Hans Hollein for the IBA 1984 designed

An apartment building and associated land can in Germany and Austria after the Condominium Act be divided among different owners, in Switzerland and Liechtenstein acquire condominium co-ownership.

Modern, mostly free-standing, multi-family houses are touted as city ​​villas in Germany , especially if they are in expensive residential areas and offer upscale furnishings. There have been examples of the use of the term since the International Building Exhibition in Berlin in 1984 , where it is a question of “no 'real' villas , but subsidized social housing ”. The architecture critic Falk Jaeger consistently describes these city ​​villas as a "dubious building task".

About 31 percent of the living space in Germany is provided by apartment buildings. They offer the second largest living space after the single-family house . The buildings make up around 38 percent of the residential units. The residential units are therefore characterized by rather smaller apartment sizes compared to the average apartment size in Germany. Many of the buildings were built in 1958–1968 and 1995–2001.