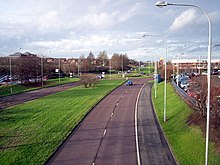 The Central Way in Craigavon

Pedestrian and cycle paths without crossing 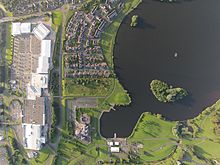 Aerial view of Balancing Lake and the mall in downtown Craigavon

Craigavon ( Irish Creig na hAbhann ) is a town in Northern Ireland in the historic county of Armagh south of Lough Neagh . It was the administrative seat of the former Craigavon ​​District , which was merged into the Armagh City, Banbridge and Craigavon District in 2015 . Craigavon ​​is now the administrative seat of the District of Armagh City, Banbridge and Craigavon. The city emerged as the New Town in the late 1960s . The plans at that time provided for the construction of a large city; only a small part of them were realized. 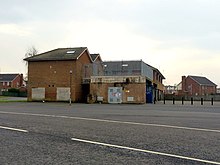 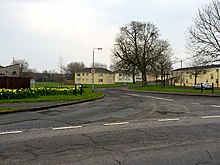 The proposal to build Craigavon ​​came from a report that Scottish architect Robert Matthew presented to the Northern Irish government in 1963. The report on spatial planning in the greater Belfast area noted rapid and previously unplanned growth in the Northern Irish capital and proposed its limitation. The top priority should be the construction of a new city, which is around 35 kilometers southwest of Belfast and into which the cities of Lurgan and Portadown should be integrated. The choice of location was based on the two existing cities, the existing transport network, the availability of land and the proximity to Belfast.

The Northern Ireland government under the 1963 Prime Minister chosen Terence O'Neill put the recommendations of the report Matthew around quickly. The construction of the new town was part of a more active, government-intervention economic policy designed to make Northern Ireland more attractive to foreign investors. The economy of Northern Ireland, particularly the shipbuilding and textile industries , was in crisis in the late 1950s; unemployment was higher than in the UK.

The intention to build the new city was announced at the opening of parliament in October 1963. A New City Design Group (NCDG) worked out a master plan by 1964 and laid down principles and goals for the planning. In June 1965 the New Towns Act (Northern Ireland) was passed, which formed the legal basis for the construction of new cities. In July 1965, a development area of ​​around 270 km² was established, which, in addition to the cities of Lurgan and Portadown, included the rural districts of Lurgan and Moira with a total of around 61,700 inhabitants. In October 1965, the Craigavon ​​Development Commission was set up to control the new construction of the city. Construction began in 1967.

The location of the new city in a predominantly Protestant-unionist area triggered criticism from the Catholic-nationalist minority of Northern Ireland . Reference was made to the structural problems and high unemployment in the predominantly Catholic west of Northern Ireland, especially in the city of Derry . The name of the city after the first Northern Irish Prime Minister, the unionist James Craig (1871-1940), who carried the title Viscount Craigavon , met with additional alienation . Craigavon's construction was approved by some Catholic nationalists, for example the reform-oriented National Democratic Party or the nationalist local newspaper The Lurgan and Portadown Examiner . Unionists mostly endorsed the plans, but unionist local politicians had considerable reservations. In particular, an influx of Catholic nationalists and an associated change in the majority in the area of ​​the new city were feared. Farmers protested against the compensation payments for expropriated land, which they considered to be far too little.

The overall planning for Craigavon ​​provided for a strict separation into residential, retail and industrial areas. The result was a ribbon-shaped city that stretched from Sector 4 southwest of Portadown to Sector 6 northeast of Lurgan. Between Portadown and Lurgan, the new residential areas Mandeville and Brownlow were to be built, in which small shopping centers were planned. The new city center should be northwest of Mandeville , industrial areas predominantly northwest of the residential areas in the strip between the railway line from Belfast to Dublin and the M1 motorway . For 1980, Craigavon ​​had 120,000 residents; In 2000, 180,000 people should live in the new city after the construction of Sector 4 and Sector 6 . When planning the transport network, it was assumed that residents own cars. Junctions of main roads should be designed as roundabouts . Away from the streets, a separate, height-free network of pedestrian and cycle paths was to be created, which would enable children to make their own way to school. Great importance was attached to recreational facilities: A small ski slope with a lift and the Balancing Lakes , two 64 hectare lakes east of the new city center, which serve both recreational purposes and rain retention , were planned and implemented .

Craigavon's first chief planner was the Scottish architect Geoffrey Copcutt , who had been involved in the planning of the Scottish New City of Cumbernauld . Copcutt resigned in August 1964. Opposite the press he was disappointed with the Northern Irish government, described the plans for Craigavon ​​as "unwise" and advocated funding for the city of Derry. Copcutt later confirmed that he had been told by government officials that the plans for Craigavon ​​should not change the majority relations between Protestants and Catholics.

In 1966, the American tire manufacturer Goodyear announced that it wanted to build a factory for the production of V-belts and conveyor belts with 2,000 jobs in Craigavon. Goodyear became the new city's main employer. 1969, two years after the start of construction, 1,500 instead of the planned 5,000 people lived in the new building districts. Goodyear struggled to find workforce. A manager of the company thought the rents in the new building districts were too high. In 1971 there was a largely unsuccessful attempt to get people to move to Craigavon ​​with cash rewards.

During the Northern Ireland conflict from 1969 onwards, attacks and clashes between the two population groups remained comparatively rare in Craigavon, but until 1973 there was frequent segregation into Catholic and Protestant residential areas in Northern Ireland , which was not foreseen in the planning. The new building areas in the east are inhabited by Catholics; they border on predominantly Catholic quarters of Lurgan. The majority of Craigavon's residents are Catholic nationalists, who were more dependent on housing and jobs.

After the British government took over direct government responsibility, the Craigavon ​​Development Commission was dissolved in 1973. They were replaced by more, the Northern Ireland Ministry subordinate institutions such as the Northern Ireland Housing Executive (NIHE). As part of the local government reform , the Craigavon ​​Borough Council, with its limited powers, was created . Representatives from Lurgan and Portadown dominated the council. Both cities retained their independence; for locals, Craigavon ​​is identical to the new development areas. From 1975 onwards, binding concepts for regional planning no longer provided any special funding for Craigavons. In the following years, the expansion of the new city largely came to a standstill. Large parts of Brownlow as well as smaller parts of the Mandeville residential area and city center have been completed. The city center consists of several administrative buildings and a shopping center.

For economic reasons, Goodyear closed its plant in 1983, which lasted 770 employees. Six years earlier the factory had employed 1,800 people. The closure of the Goodyear plant was disastrous for Craigavon; the 1980s were marked by a continuous crisis. By the early 1990s, the number of residents was reduced from 12,000 to 8,500; at times a third of the houses were empty. Vandalism was common; 800 houses, 20 percent of the total, were demolished. In the early 1990s, Craigavon's official unemployment rate was 28 percent, twice that of Northern Ireland. Actual unemployment was around 46 percent, in some settlements up to 75 percent. Around half of the households had an income below the poverty line . Local public transport was poor, so residents without cars were isolated.

At the end of the 1980s, initiatives arose which aimed to improve the situation of the residents of Craigavon. According to inventories, there was a lack of social facilities and jobs in Craigavon. Among other things, a better supply of the residential areas with shops and service facilities was proposed and implemented. Rooms should be provided for small businesses. One study suggested making better use of open spaces in the city center. New housing estates have now been built in this area. The residential area Brownlow was the only territory of Northern Ireland, which in the current 1989 to 1994 Third poverty reduction program of the EEC was incorporated. Women, children and young people as well as the unemployed received special support. The housing market in Craigavon ​​showed signs of a turnaround in the mid-1990s; NIHE sold a good third of its houses to tenants. In contrast to similar programs in the south of England, the tenants were very satisfied after buying the house. Increasingly, private builders began to build houses in Craigavon, for which the available building land was a reason.

According to information from 2007, around 20,000 people lived in Craigavon. Due in particular to immigration to Northern Ireland, the number of residents grew annually by around 1,000. Official figures for the new housing developments in Craigavons are not available; they are part of the Craigavon ​​Urban Area , which also includes Portadown, Lurgan and surrounding areas. At the 2001 census, of the 57,685 residents of Craigavon ​​Urban Area, 24.5 percent were under 16 and 17.4 percent were over 60 years old. 48.4 percent were Catholic and 49.1 percent Protestant. 4.0 percent of the working-age population were unemployed.

Craigavon ​​is twin town of LaGrange in the US state of Georgia and Ballina in County Mayo, Ireland .