Down ( Irish An Dun , "the fortress", named after the place Downpatrick , Dún Pádraig ) is one of six historic counties ( counties ) of Northern Ireland .

The county is located between Carlingford Lough , the River Bann , Belfast Lough and the Irish Sea . The landscape is shaped by the last ice age . There are higher elevations in the south with the Morne Mountains and in Central Down with the Clieve Croob .

The county has a long history in which the construction of megalithic sites played a prominent role. The story of Down is part of the history of Ireland until the island was partitioned ; look there. The historical battle of Mag Ráth (Moira in County Down) in 637 is preserved in mythical form in the story Cath Maige Rátha in Leabhar Buidhe Lecain ("The Yellow Book of Lecan").

For County Down includes the small village of Millisle . There, on Millisle Farm , around 300 Jewish children and young people were housed and trained from May 1938 until it was closed in 1948. As refugees, they were brought out of the German Reich on the Kindertransport and brought to safety in Northern Ireland .

25% of the agricultural area is used for arable farming ( barley , potatoes , vegetables ), 75 percent for livestock ( cattle , pigs , poultry , sheep ). Fishing is practiced along the coast and there are several important seaside resorts .

Around Belfast the industry is concentrated. There is primarily a mechanical engineering , electrical, computer and textile industry . 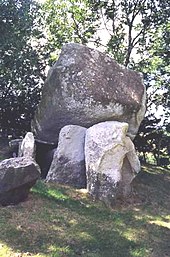 Portal Tomb Goward with the huge capstone typical of this genre