Filey is a small town in the Borough of Scarborough the English county of North Yorkshire . The resort, located in the far east of the county on the North Sea coast , had a total of 6,819 inhabitants according to the 2001 census.

The name of the city suggests an Anglic origin, which means that the area has been settled since around 800 AD.

The Fileys local history museum is located in the oldest building in the city; it was built in 1696. For a long time Filey was just a small fishing and farming village with a few hundred inhabitants. In the 18th century the place developed into a local recreation area for the people of Scarborough. In the early 19th century, the Foords Hotel was the first purpose-built hotel building. With the continuous opening of the Yorkshire Coast Line in 1847 Filey gained a rail connection, which accelerated the growth of the place.

For more than 40 years, Butlin's Holiday Park has been an important source of income for the city. Construction of the park began in 1939 but was then converted into a military base as RAF Hunmanby Moor during World War II . After the war, however, the site was used as a holiday resort, and in 1947 it was given its own rail connection through the construction of a branch line from the existing railway line. At the end of the 1950s, up to 10,000 vacationers visited the holiday park annually. After the branch line had to be shut down in 1977, the resort was closed in 1984 due to insufficient visitor numbers. 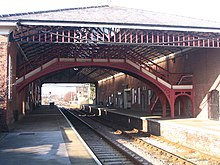 The city has a train station on the Yorkshire Coast Line from Scarborough to Hull.

From 1947 to 1977 there was a short branch line south of Filey to Filey Holiday Camp station , which consisted of two island platforms with four tracks. At the beginning of the summer it was actively used by holidaymakers, but its importance decreased noticeably in the following period due to the increasing motorization of the population. For economic reasons, the station finally had to be closed; the last train ran on July 17th, 1977. Today only the platforms and a few lamp posts can be seen.