Nicholas David Kershaw - known as Nik Kershaw - (born March  1, 1958 in Bristol ) is a British multi-instrumentalist, singer-songwriter and composer . Between the autumn of 1983 and the end of 1985 he had great success with titles like I Won't Let the Sun Go Down on Me , Wouldn't It Be Good or The Riddle . Later he also appeared as a composer a. a. for Chesney Hawkes or The Hollies in appearance. His later works like 15 Minutes or To Be Frank are more likely to be assigned to progressive rock .

Kershaw grew up in Ipswich in the county of Suffolk on. At the age of ten he stood on a stage for the first time. His parents recognized their son's talent early on. As a child he learned the instruments guitar, bass, keyboard and drums. Even as a student, Kershaw was always a member of various bands. Nevertheless, after leaving school, he first began training at the employment office in Ipswich, which he broke off. In 1978 he joined the jazz-funk band Fusion , with which he released an album under two labels. Since it did not develop into commercial success, the band split up and Kershaw became unemployed. He then devoted himself to songwriting and looking for a record deal. With an advertisement in Melody Maker magazine , he finally found his manager Mickey Modern and in 1983 signed a recording deal with MCA Records for four albums.

He released his first single, I Won't Let the Sun Go Down on Me, in September 1983 under the name Nik Kershaw . In February 1984, Human Racing, the associated album, was released, which stayed in the top ten in several countries for weeks. Shortly before, Kershaw reached the top 10 in the British and German charts with the song Wouldn't It Be Good .

Due to the success of the debut album , he released the follow-up LP The Riddle in November of the same year , from which the single of the same name was released around the same time . From this point on, Nik Kershaw could be counted among the pop stars of the 1980s. In 1985 he played at the Live Aid concert initiated by Bob Geldof at London's Wembley Stadium .

After two other, far less successful albums, Radio Musicola (1986) and The Works (1989), Kershaw largely withdrew from the music business. Between 1990 and 1998 he worked sporadically as a studio musician and songwriter , among others for Boyzone , Bonnie Tyler , Cliff Richard and Colin Blunstone . He wrote and produced the song The One and Only for the British singer Chesney Hawkes , which became a world hit in 1991.

After he released his first best-of album, The Collection, in August 1991 , the second official Greatest Hits album was released at the end of 1998 with two remixes in the typical style of the 1990s. In 1999 Nik Kershaw tried a comeback with the album 15 Minutes . This album and its 2001 sequel To Be Frank received positive reviews, but sold poorly. The 2005 album Then & Now contains a mixture of old hits and four new songs. 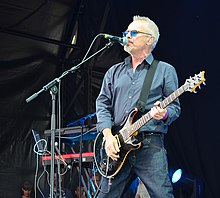 For the album You've Got to Laugh Kershaw did not sign a record deal. He released the album on 26 October 2006 on his own label Short House Records and Apple's iTunes store . In You've Got to Laugh act Simon Phillips , Nick Beggs ( Kajagoogoo ) and Imogen Heap as a guest musician. On April 25, 2008, the album was released in Germany on the Rough Trade label.

On February 1, 2010, No Frills was released, a collection of selected tracks in newly recorded acoustic versions . The album is available on Kershaw's website and the iTunes Store. On October 19, 2012, the double album Genesis Revisited II by Steve Hackett was released. In this, Kershaw sings The Lamia on the first CD . In 2019 he made an international tour on the occasion of the 35th birthday of his most successful album Wouldn't It Be Good . In the same year he received an honorary doctorate from the University of Suffolk for his musical work.

In addition to his work as a musician, Nik Kershaw has also written a book. In Spilling the Beans On ... Making It in Music , he takes a competent and humorous look at the music business. The book is currently only available in English.

Nik Kershaw has three children with his first wife, Sheri, who was a background singer on several of his albums. In November 2003, the two separated after 20 years of marriage. He has been married to Sarah Kershaw since June 20, 2009. Kershaw has a son with her.

For the end of 2020 Kershaw has announced his ninth studio album "Oxymoron". Since its release is still uncertain due to production bottlenecks during the Corona crisis, the EP "These Little Things" will be released on June 26, 2020 as a foretaste of the whole album.