from Wikipedia, the free encyclopedia
This is the spotted version , flagged on August 2nd, 2020 . There is 1 pending change that has yet to be viewed.

Simon & Garfunkel was an American folk-rock duo founded in 1957 by students Paul Simon and Art Garfunkel .

Her first single Hey, Schoolgirl was released in 1957 under the name Tom and Jerry . The following year an album named after the band was released , which was reissued in 1967. These early works were still more rock 'n' roll in the style of the Everly Brothers , while the duo did not concentrate on folk rock until the 1960s.

In the following years Paul Simon released various singles under the pseudonym Jerry Landis and worked for a short time with Carole King . As a composer he was active under the name Paul Kane during this time .

In 1964, Paul Simon and Art Garfunkel returned to the studio to record the album Wednesday Morning, 3 AM . In contrast to the following albums, the composers were even more scattered here, for example a cover version of Bob Dylan's song The Times They Are a-Changin ' and two traditionals . The cover was mostly black, with the title in the upper half and a picture of Simon and Garfunkel in the 5th Avenue Station on the New York subway in the lower half . The entire album was recorded exclusively with acoustic instruments and contained the first released version of the later hit The Sound of Silence (which was initially entitled The Sounds of Silence ). Although this album sold significantly better than its predecessor, the commercial breakthrough was still a long time coming. With this album, however, the "roles" were determined: Paul Simon was responsible for the music, Art Garfunkel for the vocals. His voice gives many of Simon and Garfunkel's pieces their unmistakable character.

Paul Simon spent the next few months in England , where, among other things, he recorded the album The Paul Simon Songbook for the BBC within an hour , which contained many songs that were later recorded again by Simon and Garfunkel. This album was only sold moderately in Great Britain , but Paul Simon made a name for himself in the English folk scene and could charge up to £ 20 per evening (around 200 euros today). During this time, Simon wrote some songs that were later recorded by Simon and Garfunkel.

During this time , a revised version of the song The Sounds of Silence was created under the direction of Tom Wilson , who had also produced Wednesday Morning, 3 AM : the existing acoustic version was underlaid with electric guitars and drums. This version was released as a single in September 1965 and was the final breakthrough for Simon and Garfunkel.

In December of the same year, the recordings for the album Sounds of Silence took place . In addition to the revised version of The Sounds of Silence, this also contains a new version of the song Wednesday Morning, 3 AM , which was already included on the first album - but with minor changes in the text and the melody of Davey Graham's instrumental piece Anji . This new version is titled Somewhere They Can't Find Me . The album was released in the United States in March 1966. Also included was Richard Cory , based on a poem by Edwin Arlington Robinson . The UK released version also contained the song Homeward Bound , which was released as a single in the US in May 1966. Homeward Bound became Simon and Garfunkel's first top ten hit in England.

The peak of the career 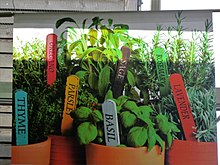 Long term impact of the song Scarborough Fair : Poster with flower pots in the Park of Gardens 2019 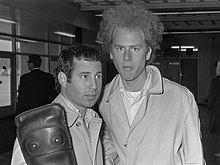 Due to their great success, Simon & Garfunkel went straight back to the studio and in November 1966 the album Parsley, Sage, Rosemary and Thyme was released . This line comes from the English Traditional Scarborough Fair , which was re-recorded by Simon & Garfunkel for this album and underlaid with the song Canticle . This in turn was based on the piece already published by Simon on The Paul Simon Songbook with the title The Side of a Hill . The resulting song Scarborough Fair / Canticle is u. a. counted among the most important and interesting folk songs because of the vocal part. The second extraordinary track on the album was 7 O'Clock News / Silent Night . Here is a rehearsed by Simon & Garfunkel version of was Christmas carol Silent Night ( Silent Night ) mixed with the inclusion of a news broadcast. Both songs were intended by Simon & Garfunkel as an artistic protest against the Vietnam War that was taking place at the time .

During this time, Simon & Garfunkel gave many concerts, also at various universities in the country. From this time there are various concert recordings, so-called bootlegs , the sound quality of which is sometimes very poor. However, a concert from 1966 at Tufts University in Boston was officially released and some pieces such as You Don't Know Where Your Interest Lies were only available on this album for a long time, until the late 1990s many old recordings were also new were launched.

In the spring of 1968, the soundtrack album The Graduate was released for the film of the same name (German title: Die Reifeprüfung ) with Dustin Hoffman in the lead role. The title song Mrs. Robinson - which has little in common with the film's protagonist of the same name - is still one of the most popular pieces by Simon & Garfunkel to this day. Other songs on this album were alternative versions of known recordings as well as part of the original music by Dave Grusin . There was a Grammy for both Mrs. Robinson and the entire soundtrack album .

In May 1968, the duo's fourth "official" album was released under the title Bookends . In addition to Mrs. Robinson and the piece America , this album also contained the title Save the Life of My Child , which in turn included a sequence from the 1966 version of The Sound of Silence . With this album, Roy Halee finally joined the band, who in the following years was responsible for the duo's releases again and again as a producer and also later worked frequently with Simon.

The end of the duo

In 1969 only the single The Boxer appeared . At the end of January 1970, the song Bridge over Troubled Water was first published, followed a week later by the album of the same name , of which 1.7 million copies were shipped in the USA in the first three weeks. Shortly after the album was released, Simon & Garfunkel announced their split. The reasons given at the time were that, on the one hand, Art Garfunkel was more dedicated to his career as an actor - initially, however, there were three appearances in the films Catch-22 , Carnal Knowledge and Bad Timing - and that Paul Simon wanted to adopt a different musical style. The duo received six Grammys for the album , including “Best Contemporary Song” and “Best Album”.

The final end was not yet come for Simon & Garfunkel. First, a best-of album was released in June 1972 under the title Simon and Garfunkel's Greatest Hits . Occasionally the two appeared together on television shows , and in 1975 a new joint single was finally released under the title My Little Town . The fans were hoping for a reunion, but it stayed with this single single. In 1978 they finally recorded a single, this time with singer James Taylor . It was a cover version of the piece (What a) Wonderful World by Sam Cooke .

The two singers celebrated their most successful reunification in front of a large audience on September 19, 1981: Since the city council of New York and its mayor Ed Koch were planning to close Central Park for cost reasons , a number of artists came there during this time and gave Benefit concerts. Over 500,000 spectators were present at the Simon & Garfunkel concert, and since the originally planned fireworks display was forbidden for that evening, the final piece, The Sounds of Silence, saw a large sea of ​​burning lighters . Paul Simon thanked Ed Koch, among others, for staging the concert, which at first led to isolated whistles, but when the irony in Simon's speech was recognized, it turned into great applause. The recording was released as a double LP. This was followed by a short world tour, which brought the duo to Germany for a few appearances in 1982.

A short time later, Simon & Garfunkel began producing a joint album, but gave up the project quite quickly (Paul Simon used the songs on his album Hearts and Bones , but without Art Garfunkel's contributions).

In the 1990s, there were occasional concerts together that   resulted from the duo's introduction into the Rock and Roll Hall of Fame .

In 2003, Simon and Garfunkel was awarded the Lifetime Achievement Award of the Recording Academy awarded. On the occasion of the award, the duo performed at the Grammy Awards and played an acoustic version of their first big hit The Sound of Silence .

The rehearsals for this performance resulted in the plans for a joint tour, in order to say goodbye to the audience and to end the chapter Simon and Garfunkel with conciliatory tones. This Old Friends Tour was initially scheduled for three months and took place exclusively in the USA from October to December 2003. Because of the great success it was decided to continue the tour in 2004. It lasted from May to July 2004, this time half of the concerts taking place in European cities. On the double CD and DVD that document these concerts, there is also a new studio recording, Citizen of the Planet , as a bonus . This piece was written by Paul Simon for the 1983 album Hearts and Bones , but was never released. Garfunkel pushed for the song to be released in 2004, where only he had to sing his part, which was then mixed with Paul Simon's recording from 1984.

After the end of the 2004 tour, Paul Simon and Art Garfunkel went on tour solo again. However, they came together sporadically on a few occasions, for example in 2006 at a benefit concert for the benefit of the victims of Hurricane Katrina , where they sang a few songs together. In addition, on February 13, 2009, they performed as a duo on the stage of the Beacon Theater , which Paul Simon reopened with a concert. There they sang The Sound of Silence, The Boxer and Old Friends together . After this performance, another joint tour was announced. This led through New Zealand, Australia and Japan in June and July, as these regions were left out on the last tour. On October 29, 2009, on the occasion of the 25th anniversary of the Rock and Roll Hall of Fame , the duo stood together again, alongside other artists at the 25th Anniversary Rock and Roll Hall of Fame Concert, and performed some songs. April 2010 a performance took place at the annual New Orleans Jazz Festival. Further concerts planned for 2010 had to be canceled by Garfunkel due to vocal cord problems.

In 2015, Art Garfunkel attracted attention with an interview for the British daily Telegraph . In it he described the duo's split at the time as a mistake and Simon as an “idiot” because of his decision to do so. When asked about the size difference between himself and Simon, Garfunkel speculated that it could be that he felt pity for Simon's smaller body size in the 1950s and therefore began to make music with him. In retrospect, he probably “created a monster”. German daily newspapers subsequently reproduced the interview in a distorted manner.