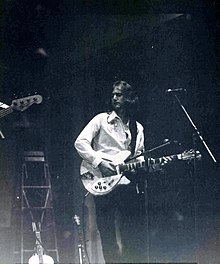 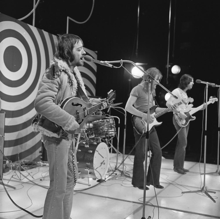 Folk rock , also known as folk rock or folk rock , is a genre of music that is a synthesis of folk and rock music .

The original folk rock originated in the United States and Canada in the 1960s . Dense vocal harmonies as well as a relatively effect-free and distortion-free sound of the electric instruments are typical , embodied for example by the sound of Byrds guitarist Roger McGuinn . The repertoire is partly based on the actual folk, but more clearly based on singer-songwriters from the folk environment like Bob Dylan . Acoustic instruments are also used.

This variant of folk rock led to British folk rock (also known as electric folk ) of the late 1960s. Based on North American folk rock, it was the style-defining band Fairport Convention , along with a few others , that consciously incorporated elements of British folk into their music. Shortly thereafter, the originally more traditional folk group Steeleye Span began to increasingly incorporate elements of rock music into their pieces and achieved similar results. After the mixture of Irish folk and rock gained some fame in this way, bands from Ireland like Horslips also began to use this type of music. This development towards rock music itself inspired several new varieties, including English folk rock.

It is also worth mentioning the current of Celtic Rock , which adapted stylistic elements of folk music from Ireland , Scotland , Cornwall and Brittany . In addition to the Irish band Clannad, the Breton harpist and singer Alan Stivell , who popularized the style beyond the borders of France and is often referred to as the "father of Celtic rock", was characteristic of this variant . At least in the first half of the 1970s, Celtic Rock was very close to its roots in folk, the pieces clearly referred to traditional Celtic fiddle and harp melodies and even singing styles , but they did not dispense with guitar amplifiers and drums . Over the years, many performers, including Clannad and Stivell, increasingly turned to esoteric or New Age content, but without abandoning their folkloric roots entirely.

In a broader sense, the term folk rock also includes other comparable musical styles and currents in the English-speaking world, its Celtic fringes and, to a certain extent, in other European areas as well. Much like the genre itself, its boundaries are difficult to define. Instrumentation, playing and singing style as well as the selection of the folk-rock material can be more closely based on folk or rock music. Although the music of the white English-speaking North Americans is cited as the origin of the actual folk rock, there is no clear definition of which other folk cultures can also be considered as an influence. As a rule, the term is not applied to blues-based or other music of Afro-American origin, nor to cajun-based music and, in particular, since the 1980s, not to the music of other non-European population groups, which since then has generally been classified as world music .