Fairport Convention is a British folk rock band formed in May 1967.

In 1966 bassist Ashley Hutchings and guitarist Simon Nicol founded the amateur band The Ethnic Shuffle Orchestra in Muswell Hill, London . In the same year Richard Thompson also joined the band, which appeared from May 1967 under the name Fairport Convention. Fairport paid homage to the house of the same name owned by Nicol's father, who ran a doctor's office in it and made an entire floor available to the young artists.

In November 1967 the band was signed by Joe Boyd . Soon after, the first single, If I Had a Ribbon Bow, appeared . At the beginning of 1968 Fairport Convention played in the opening act for Procol Harum and six months later the debut album Fairport Convention was released . Singer Judy Dyble left the band a short time later and was replaced by Sandy Denny .

In January 1969, the band got a contract with Island Records and released What We Did On Our Holidays and Unhalfbricking , with their only Bob Dylan- written hit Si Tu Dois Partir (If You Gotta Go, Go Now) , which hit the UK charts Place 21. Ian Matthews left Fairport Convention due to personal and musical differences and then formed his own band, Matthews Southern Comfort . On May 14, 1969, the drummer Martin Lamble was killed in an accident involving the conveyor belt.

The two new members Dave Mattacks (drums) and Dave Swarbrick (vocals, fiddle , mandolin ) could then be heard on the LP Liege & Lief, which was released in November 1969 . The album offered a mixture of rock and folk - it is considered the classic British folk-rock album par excellence. Despite the record's success, Denny and Ashley Hutchings left the band. Instead came Dave Pegg , with whom the album Full House was released.

In January 1971, Richard Thompson left the Fairport Convention. The soon to be released Babbacombe Lee is considered by some critics to be one of the best concept albums in rock history. It tells the story of John Lee, "the man they couldn't hang" ( the man they couldn't hang ). Thompson and Denny also took part in some of the following shows. On Rosie (1973) were among other Sandy Denny, Richard Thompson, Linda Peters (later Thompson), Trevor Lucas and Jerry Donahue of Fotheringay and Ralph McTell heard.

In the same year Nine followed , which was also well received by the critics. There were Mattacks, Pegg, Swarbrick, Donahue and Lucas left over from the previous cast. Sandy Denny briefly rejoined the band for Rising for the Moon and Fairport Live Convention . In live performances, Paul Hule sporadically hired himself out as a percussionist.

In 1976 Gottle O'Gear was released , an album that was not well received by the critics. Soon after, the band switched to Vertigo Records , where they released Bonny Bunch Of Roses . On Tipplers Tales (1978) they tried to leave the folk ways , which they failed according to critics. In 1979, Fairport Convention separated. 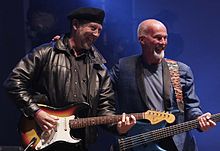 1980/81 there were various reunion concerts, among others with Richard Thompson and Judy Dyble. Since then, the Cropredy Festival has been held every year in August in a field near the village of Cropredy (near Banbury in Oxfordshire ), at which the group itself (in the current line-up) and former band members such as Richard Thompson, Dave Swarbrick or Jerry Donahue Play as guests or solo or with your own bands in front of around 15,000 to 25,000 spectators of all ages. In 1985 the band was reissued with Mattacks, Nicol, Pegg, Ric Sanders and Martin Allcock. At the 20th anniversary in 1987, Ian Matthews was there again for a short time. In the same year the albums Heyday: The BBC Radio Sessions and In Real Time were released, on which they once again allowed traditional folk elements to be heard. With Red & Gold from 1988, Fairport Convention even returned to the UK album charts.

In 1989 Bert Jansch and Jacqui McShee joined the band briefly as guests. The Five Seasons from 1990 is considered an important work of the more recent times, which was probably mainly due to its catchy melodies. The 1997 album Who Knows Where the Time Goes? dedicated the Fairport Convention to Sandy Denny, who died in 1978.

After Who Knows Where the Time Goes? Dave Mattacks left the band and Gerry Conway (ex-Fotheringay) took over the role of drummer. The albums The Wood and the Wire , XXXV and Festival Bell were recorded with Conway .

Fairport Convention received the Lifetime Achievement Award at the BBC Radio 2 Folk Awards 2002 , and their album Liege & Lief was voted Most Influential Folk Album Of All Time in a 2006 audience vote at these awards . At the Cropredy Festival 2007 Liege & Lief was performed in a one-time live production with almost the original line-up (Chris While took over the vocals for the late Sandy Denny) in the original title sequence of the album.