The Roskilde Festival has been an annual music festival near Roskilde in Denmark since 1971 . The four-day festival on the island of Zealand is one of the largest in Europe with up to 115,000 participants. The event is set up, organized and supervised by up to 25,000 unpaid volunteers.

All profits from the festival go to Foreningen Roskildefonden , which passes the money on to humanitarian, cultural and other non-profit organizations such as Amnesty International , Doctors Without Borders , Human Rights Watch and many Danish organizations.

The first Roskilde Festival took place on August 28 and 29, 1971 under the name SOUND FESTIVAL . It was inspired by festivals and youth gatherings like Newport , Isle of Wight and Woodstock . It was mainly characterized by bad management and great enthusiasm. There was only one stage on which about 20 bands from the fields of folk , jazz , rock and pop performed. The festival lasted two days and had around 10,000 visitors a day. The organizers at the time were a music agent from Copenhagen and a group of local high school students. Due to the hard physical work in connection with the festival, they were not interested in organizing the festival again the following year. 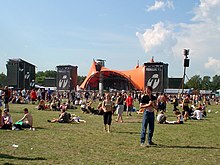 The local organization Foreningen Roskildefonden has been working in the area around Roskilde since the 1930s to establish facilities for children and young people and to organize city festivals. This association was asked by the Roskilde City Council to take over the idea of ​​a festival in Roskilde and to organize the festival in cooperation with a joint-stock company that was founded solely for this purpose. In 1972 the festival was held again under the name Fantasy . It lasted three days this time and attracted around 15,000 visitors a day. There was a stage on which 25 bands performed. The festival was mostly organized by volunteers.

The festival developed in the course of the 1970s. A basic structure was created in which the volunteers became the most important workers. The Roskilde Festival is a not for profit event. All surpluses will be donated to humanitarian causes.

The festival has developed over the years and donations up to 2010 amounted to more than 13 million euros. Among the organizations that have been supported are War Victims in Iraq , Doctors Without Borders , Amnesty International , Save the Children and WWF . In addition, each year a socio-political topic is selected that is incorporated into art contributions or activities. In addition to the 25,000 helpers who support the festival every year, the festival is mainly planned, organized and coordinated by the Klub 100 group . Around 400 employees work in this club on a voluntary basis. The name arose from the fact that the employees devote more than ten days a year and thus at least 100 hours to planning the festival. Club 100 volunteers are rewarded with joint dinners, office trips and other events. The Roskilde Festival has 25 paid employees who, as section heads, are responsible for drinks, music and camping.

In 1978, the organizers of the British company acquired Revelation staging the Canopy Scene , an orange music stage at which the Rolling Stones were previously on a European tour. Since then, the canopy scene with its characteristic arches has been the well-known symbol and logo of the festival.

The festival began to increasingly invite young bands of international renown. In 1978, Bob Marley and The Wailers played together with 40 other bands on three stages, in front of an audience of up to 36,500 visitors per day.

In the 1990s, new tones were established at the festival. For example, Club Roskilde was held for the first time in 1991 , where festival-goers could dance to electronic music on one evening of the festival. In 1995 electronic music got its own stage. This is how grooves and beats sounded from the new Deeday tent throughout the days of the festival in 1995 . In the following years, the establishment of the chill-out zone and the Roskilde Lounge created even more space for electronic music. Since then, artists such as Fatboy Slim , The Prodigy , Basement Jaxx and Chemical Brothers have performed on the main stage.

In the 1990s, the number of tickets available for purchase was limited and later even reduced. Due to the steadily increasing popularity of the festival, the number of participants had risen to up to 125,000. In addition to 90,000 tickets sold, there were around 25,000 volunteers, 5,000 media people and 3,000 artists. In order to maintain the quality of the festival, the festival management decided to limit the number of participants. The festival management seemed to have found the distance from the rearmost part of the camping area to the stages unreasonable. The festival had grown so big that in 1994 the festival management decided to expand the camping area to the west. From then on, the camping area was divided into two parts by the railway line, which can be crossed in two places by bridges, a fixed road bridge in the north and a temporary bridge with stairs in the middle of the area. In 1996 the festival got its own train station, which should simplify the journey of the visitors. In 1997 another tent called the Roskilde Ballroom was added. 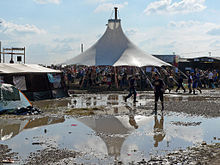 Since 1998, the festival has had its own radio station, Roskilde Festival Radio , which broadcasts on FM 92.3 MHz for nine days during the major event. The program is produced by the association of Danish university radio stations ( De Danske Studenterradioer , DDS for short). Student reporters report live from the festival and announce planned activities and program changes. From Roskilde Festival Radio is also the so-called nude run ( Nøgenløb ), a race with only bare participants organized. The race is held every year on Saturday during the festival and attracts a lot of media attention.

On June 30, 2000 an accident occurred at the Roskilde Festival during the performance of the band Pearl Jam , in which nine people were killed. They lost their footing on muddy ground, fell and were suffocated by the crowd pushing after them. The festival management decided afterwards to continue the festival.

The management justified this decision by stating that it seemed “irresponsible to simply send the 90,000 shocked people home without knowing whether there were friends among the dead”. A memorial ceremony with Bishop Jan Lindhardt from Roskilde was held in front of the main stage .

As a result, serious allegations were made, referring to security deficiencies. In particular, the recruitment of underage stewards, who should have performed security functions in return for free festival entry, was described as "scandalous".

Performance by the Junior Senior group, 2005

Today nine birch trees and a memorial stone with the inscription How fragile we are remind of the accident on the festival site .

In 2000, the festival management decided to respond to festival visitors arriving earlier and earlier by introducing a four-day warm-up . During the warm-up, the camping area is opened four days before the actual festival site and various attractions are offered. There is, among other things, a skate park , a cinema , a camping stage and numerous events. In 2006 a swimming lake and a fishing lake were added.

On the last day of the 2011 festival there was a fatal accident to a German who fell from the 30-meter-high Tuborg Tower.

The 2013 Roskilde Festival took place from June 29th to July 7th, 2013. The headliners included Rihanna and Kraftwerk put on a 3D open-air show. To this end, 70,000 visitors were equipped with appropriate glasses.

At the Roskilde Festival 2014, inter alia For the first time the Rolling Stones were won as headliners, who returned to the Orange Stage after almost 40 years . However, it was no longer the stage that originally belonged to their own tour equipment, and in 2001 it gave way to a completely new building. To underline the festival's political aspirations, the organizers invited two activists from the Russian punk group Pussy Riot . Nadja Tolokonnikova and Mascha Aljoschina used the opportunity on the Gloria Stage to advertise their goals.

On March 6, 2015 it was announced that Sir Paul McCartney would play his only European festival gig in 2015 in Roskilde. Also headliners should be: Muse and Pharrell Williams .

Concert at the Roskilde Arena

Today the festival has seven stages.