Aquaman is a 2018 comic film adaptation about the fictional comic character of the same name from DC Comics . The film represents the sixth part of the DC Extended Universe . It is the second theatrical adaptation of the character Arthur Curry, who is behind the identity of Aquaman , after Justice League , and the first solo adaptation of this character for the cinema. In Batman v Superman: Dawn of Justice , Aquaman had another cameo . While James Wan directed the film, Jason Momoa once again starred as Aquaman . Zack Snyder , who directed Justice League and Batman v Superman: Dawn of Justice , served as executive producer on the film along with others .

In Maine, lighthouse keeper Thomas Curry saves Atlanna, the princess of the underwater nation of Atlantis, during a storm. The two fall in love and have a son, Arthur, who is born with the power to communicate with marine life and to swim particularly quickly. Atlanna is forced to give up her family and return to Atlantis. She entrusts her loyal advisor Nuidis Vulko with the task of training Arthur. Under Vulko's leadership, Arthur becomes a skilled warrior, but the Atlanteans reject him as a hybrid.

A year after the invasion of Steppenwolf (see Justice League ), Arthur is faced with a group of pirates who try to hijack a nuclear submarine. Their leader, Jesse Kane, dies during the fight while his son, David, swears revenge on Arthur. David later attacks Atlantis at the behest of Orm, Arthur's younger half-brother and King of Atlantis. Orm uses the attack as a pretext to declare war on the overworld. King Nereus of Xebel swears allegiance to Orm, but his daughter Mera, who is engaged to Orm, refuses to help them. She travels to the overworld to ask Arthur for help and wins his trust by saving Thomas from a tidal wave sent by Orm. Arthur reluctantly accompanies Mera to a meeting with Vulko, who asks Arthur to find the Trident of Atlan, a magical artifact that once belonged to the first ruler of Atlantis in order to regain his rightful place as king. However, they are ambushed by Orm's men. While Mera and Vulko escape, Arthur is captured.

Orm visits the imprisoned Arthur and blames him and the overworld for the death of her mother, who was sacrificed for the fathering of a half-blood son. He offers Arthur to go forever, but Arthur challenges him to a duel instead. In a ring of underwater lava, Orm gains the upper hand and can almost kill Arthur before he can escape with Mera's help. The two fake their deaths. Arthur and Mera travel together to the Sahara, to the former underwater kingdom of the deserters, where the trident was forged, and find a holographic message that leads them to Sicily. There you can find out the exact whereabouts of the trident. In the meantime, Orm gives David Atlantic armor and weapons and sends him out to kill Arthur, but also Mera, contrary to their father's express wishes, which they were able to track down with the help of a hidden tracking device. He locks Vulko after learning of his betrayal and forces two other kingdoms of the oceans, the Fishermen and the Brine, to swear allegiance to him in his fight against the overworld.

In Sicily, David, now called Black Manta, ambushes Arthur and Mera and injures Arthur before falling off a cliff to what appears to be death. Mera tends to Arthur's wounds as they travel to the location of the Trident and encourages him to accept his fate as a hero. Once at their destination, Arthur and Mera are attacked by a legion of amphibious monsters known as the Trench, but they manage to repel them and reach a wormhole in the Trench realm that transports them to an undiscovered sea in the center of the earth. There they unexpectedly meet Atlanna, who was supposed to be sacrificed to the Trench by the Atlanteans, but managed to flee and reach the undiscovered sea, where she has been stuck ever since.

Arthur faces Karathen, the mythical being who guards the trident, and expresses his determination to protect both Atlantis and the overworld. He proves worthy and conquers the trident that gives him control of the seven seas. Arthur, Mera, and Atlanna lead an army of marine animals to battle Orm and his followers, who eventually accept Arthur as the true king when they learn he is wielding the trident. Arthur defeats Orm in battle, but decides to save his life, and Orm accepts his fate after finding out that Arthur found and saved her mother. Atlanna returns to the surface to Thomas while Arthur ascends the throne with Mera by his side.

In a mid-credit scene, Black Manta is played by Dr. Rescued Stephen Shin, a scientist obsessed with finding Atlantis. He agrees to lead Shin there if Shin helps him get revenge on Arthur. 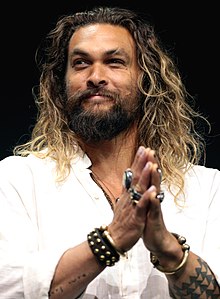 Even before this version of Aquaman was produced , there were plans to make a film with this character in the title role, and Warner Bros. first plans go back to 2003. Alan and Peter Riche from the production company Sunrise Entertainment were supposed to produce the film for Warner. This was the first time Ben Grant was to write the script for a major production. However, this film was never made. Several years later it was reported that an Aquaman movie starring Leonardo DiCaprio was in development. But this film was never made either. A production of a television series on Aquaman, which was to be broadcast for the first time in 2006, also failed. Only a pilot episode was released.

On November 25, 2013, following the release of the film Man of Steel , Geoff Johns stated that Aquaman was one of the primary characters in DC Comics . On October 15, 2014, Kevin Tsujihara, Chairman of Warner Bros. , announced numerous film plans to become part of the film universe that began with Man of Steel . He also announced a film adaptation of the character Aquaman for July 27, 2018. He also announced that Jason Momoa would play this role. In December 2016 it was announced that the film launch had been postponed to October 5, 2018.

It was not Momoa's first appearance as Aquaman : Already in Batman v Superman: Dawn of Justice , which appeared in 2016, Momoa impersonated this character in a guest appearance. This makes Batman v Superman: Dawn of Justice the first feature film in which Aquaman has an appearance. Momoa can also be seen as Aquaman in its sequel Justice League . This makes Aquaman the third film with Momoa in the role of the same name, but the first movie adaptation with this character as the main character. In total, Momoa signed a contract for four films.

Even before the film was officially announced, the Hollywood Reporter wrote on November 12, 2014 that Will Beall and Kurt Johnstad were each working on a version of a script for Aquaman , using the better version as the script.

In early 2015, it was announced that Warner Bros. was considering Jeff Nichols and Noam Murro for the director's chair. Even Peter Jackson the post was offered twice, but due to his lack of enthusiasm for superhero films he refused. On April 10, 2015, the Hollywood Reporter wrote that Warner Bros. was negotiating with James Wan to direct. On June 3, 2015, the film website Deadline.com announced that Wan had signed on to direct and that Johnstad's script was being reviewed. In March 2016, film producer Charles Roven announced that Aquaman would continue the Justice League plot . Seven months later, Wan said that Aquaman should represent "a classic action-adventure, a kind of adventure story on the high seas".

After seven months of shooting under the working title Ahab , Jason Momoa announced the end of the shooting on Twitter in October 2017, which, although the film is mainly set underwater, took place on land, with the underwater look largely generated by CGI . Actor Ludi Lin described James Wan's vision in an interview as that of an “underwater Star Wars”. The score is composed by Rupert Gregson-Williams . The American singer-songwriter Skylar Gray recorded the song Everything I Need for the film , which was written by Gray and Elliott Taylor. The soundtrack for the film, which comprises a total of 27 pieces of music, was released by WaterTower Music on December 14, 2018.

A first trailer was published in July 2018 as part of the San Diego Comic-Con International . A five-minute long trailer followed at the beginning of October 2018. Aquaman celebrated its world premiere on November 26, 2018 in London. A presentation at the Comic Con Experience (CCXP) in São Paulo was also planned in advance. It was released in German cinemas on December 20, 2018 and in US cinemas the following day.

The first votes to Aquaman after a full screening of the film in November 2018 were positive. In social networks, the cheerful narrative tone, which is more reminiscent of the films of the Marvel Cinematic Universe , was highlighted.

In early December 2018, it was announced that the film was in the preselection for the 2019 Academy Awards in the Best Visual Effects category .

The film has so far won over 65% of the critics on Rotten Tomatoes and received a Metascore of 55 out of 100 possible points on Metacritic.

Peter Debruge complains in Variety that the script is totally inelegant, full of embarrassing lines that make the average dialogue in a comic balloon sound almost like Shakespeare (e.g. Atlanna: "Where I come from, the sea carries our tears away" ), although “Aquaman” clearly doesn't take itself seriously.

“ Wan's philosophy seems to be that sci-fi / fantasy should push the limits of the imagination, even at the expense of what may be ridiculous looks. […] In any case, it [Aquaman] is a spectacle. "

Even before its release in Germany and the USA, Aquaman was released in Chinese cinemas. There he played in his opening weekend 93.6 million dollars and became so quickly became a box office success. On the opening weekend, the film was able to reach number 1 in the German cinema charts with 375,000 moviegoers. In the USA, too, he was able to take the top position with gross profits of 72.1 million US dollars. On the second weekend, the film reached number 2 in the German cinema charts with 425,000 cinema tickets sold. At the same time he was able to defend the top position in the USA with a turnover of 52.14 million US dollars. On the third weekend, Aquaman was able to defend first place in the USA with a gross profit of 30.7 million US dollars, while in Germany it continued to occupy second place in the cinema charts with 290,000 moviegoers. Worldwide revenues are so far at 1.148 billion US dollars, of which he was able to bring in 335.06 million US dollars in North America alone. This places it in 23rd place (as of August 8, 2020) among the financially most successful films of all time and in 5th place among the most successful films of 2018 . After only three weeks it was able to outbid the box office results of Batman v Superman: Dawn of Justice and become the financially most successful film in the DC Extended Universe . At the end of January 2019, it was finally able to surpass the grossing results of The Dark Knight Rises and thus become the financially most successful DC film adaptation. So far, the film has had 1,973,126 visitors in Germany, bringing in 21.63 million euros.

On the same day that Aquaman was announced, numerous other films through 2020 from the DC Extended Universe were announced. After Aquaman , a film adaptation of Captain Marvel appeared under the title Shazam! as the next film in the franchise. In January 2019 it was announced that a sequel to Aquaman was being planned.

In February 2019, Warner set December 16, 2022 as the North American theatrical release of the sequel.