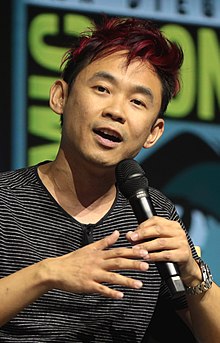 James Wan at Comic-Con in San Diego in July 2018

James Wan was born to Chinese parents in Kuching and grew up in Perth, Australia from a young age . At the age of eleven, he expressed the desire to make films for the first time and pursue this career path. He finally did his Bachelor of Arts at RMIT University in Melbourne , where he has lived since then.

In 2000 he made his first feature film, Stygian , which is largely unknown. In 2003 he shot the short film Saw with his college friend Leigh Whannell , which they directed for advertising purposes in order to realize a feature-length version. The short film was convincing and offered Whannell and Wan the opportunity to shoot a full-length version of the film, which was released in 2004 and grossed over 100 million dollars worldwide. Wan was executive producer on all six sequels . The sequels were directed by Darren Lynn Bousman , David Hackl and Kevin Greutert .

In 2010, Wan shot the horror film Insidious , again based on the Whannell script . The film with Patrick Wilson , Rose Byrne and Barbara Hershey managed to build on the success of his first well-known feature film and grossed almost 100 million dollars worldwide on a budget of less than two million dollars. In 2013, all of the main characters appeared in the sequel Insidious: Chapter 2 , which Wan also directed again. The script was again contributed by Leigh Whannell, who has a small supporting role in both parts.

In the summer of 2013, the film Conjuring started with Patrick Wilson and Vera Farmiga in the leading roles. The film received consistently positive reviews and grossed over $ 100 million in two weeks.

In 2014, Wan directed the seventh part of the Fast and Furious series . In addition, a thriller by director Will Canon with Maria Bello and Dustin Milligan is to appear in the same year , in which Wan was involved in the script and acts as a producer.