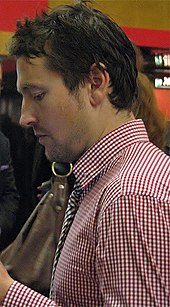 Leigh Whannell (born January 17, 1977 in Melbourne ) is an Australian screenwriter , actor and director .

His most important work so far was the script for the short film and the film adaptation of the thriller Saw , in which he also played the role of Adam, one of the main characters in the film. He also came up with John Kramer / Jigsaw, the central antagonist of the film series.

He also wrote the script for the films Dead Silence and Insidious , which, like the Saw films, he produced with James Wan. He also played a supporting role in Insidious . The 2015 film Insidious: Chapter 3 - Every Story Has a Beginning is Whannell's directorial debut. In 2018, Upgrade was followed by his second feature film as a director.

In Matrix Reloaded Whannell had a small appearance as Axel in Death Sentence - death sentence as Spink .