The Porsche 962 from Brun Motorsport with which Jesús Pareja competed in the 1990 World Sports Car Championship ... 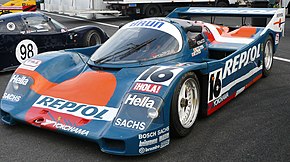 Jesús Pareja began his career in 1976 in Spanish touring car racing, where he won the championship in his home country in 1981. After a few years in various one-make cups - including tenth overall in the Alfasprint European Cup in 1983 - he entered the sports car world championship in 1984 .

In 1985 he made his debut at the 24 Hours of Le Mans , where he competed 13 times in a row up to 1997 . In sports car races celebrated a total of four overall and two class wins. He achieved his first overall victory at the 360 km race in Jerez in 1986 , a race in the sports car world championship of that year ; Partner in the Brun - Porsche 962 was Oscar Larrauri . In 1994 he won the 4-hour race at Paul Ricard , the 4-hour race at Jarama and the 1,000-km race at Suzuka . All races counted towards this year's BPR Global GT Series and his teammates in the Porsche 911 Turbo S LM were Bob Wollek , Jean-Pierre Jarier and Dominique Dupuy .

The 480 km race in Montreal was the eighth and penultimate race of the 1990 World Sports Car Championship and took place on the Gilles-Villeneuve Circuit in early September . After almost a third of the race, a Jaguar XJR-11 tore a needle cover from its anchorage and threw it into the air. The following Pareja in the Porsche 962C registered by Brun Motorsport could no longer avoid the cover; this broke through the windshield of the Porsche and subsequently the tank. The Porsche crashed into a wall on the left in the direction of travel and went up in flames. Miraculously, except for a few bruises, Pareja was virtually unharmed. Although the cockpit was very narrow, the manhole cover missed the driver by millimeters. Rapidly engaging marshals opened the driver's door and freed the pilot from the burning race car.

After the incident, those responsible at the FIA decided to weld all manhole covers on racetracks with public road sections before the respective races.

After the end of his active career in 1997, Pareja worked for many years in the event management of motorsport events. He organized the races of the International GT Open and was a long-time official of the Formula 3 Euro Series .