The Digedags were from 1955 to 1975, the main hero of the GDR published comic magazine mosaic . The three goblins Dig , Dag and Digedag experienced adventures in space and time in several large series. The creator of this comic series is the illustrator Hannes Hegen (1925–2014). The booklets were designed in a large group of artists. 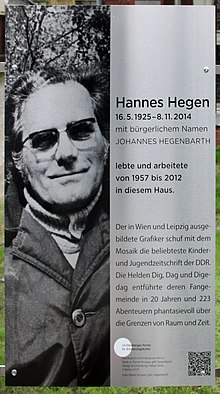 The first mosaic books were comics with speech bubbles. Later they went over to putting text bars under the pictures, which gave the comic prose character. Basically, the mosaic no longer contained comics, but rather picture stories. This development went back in particular to the draftsmen of the booklets and above all to the artistic director Hannes Hegen. They didn't want the speech bubbles to cover up the images. In the last series, set in the Orient, one returned to the speech bubbles, but these were no longer rounded. They stood square outside of the picture, almost instead of the missing text bars. Regardless of the speech bubbles, the image was almost without cover - except for a thin connection between the figure and its text.

The booklets were initially published quarterly, had 32 pages and cost 95 pfennigs , from 1957 the booklets appeared monthly with 24 pages at a price of 60 pfennigs. The magazine was published by Neues Leben until 1960 , after which it was transferred to Junge Welt . In November 1973, Hegen canceled his contract with the publisher as of July 1, 1975 (issue 223), although a new contract would have been possible on the condition that he only had to deliver six issues per year with 32 pages. The publisher did not accept this offer, as it was dependent on the one hand on the full high monthly profit that the mosaic generated to cross-subsidize most of the other, very loss-making children's and youth magazines, and on the other hand also on the employees involved in the mosaic production had to work to capacity accordingly. Since Hannes Hegen held the copyrights to the Digedag figures, the Digedag series with issue 223 had to be discontinued. While working on the last issues of the America series and the first issues of the Orient cycle , the new Abrafaxe series was prepared in parallel from 1974, initially by Lothar Dräger and Wolfgang Altenburger, and then from the beginning of 1975 with the help of the Mosaik collective Figures in January 1976 that replaced Digedags. Before that, issues 90 to 95 were reprinted in the second half of 1975, made possible by a licensing agreement between Hegen and the publisher, with continued numbering. This reprint was used, among other things, to test the new printing process, which involved switching from a sheet-fed offset press to a web offset press. As a result of this change, the Abrafaxe books only had 20 pages instead of the previous 24.

In the early 1990s, the Junge Welt book publisher began to reprint the Mosaik books 1 to 223 under license as limited edition reprint cassettes, of which the issues of the first volumes are now traded at high prices among collectors and are hardly available on the collector's market . Hegenbarth, who was involved in the design of the portfolios as the rights holder as well as the artist, made the original films available for printing. At the same time, the complete Digedags series was partially edited in various formats, mainly in the form of hardcover anthologies, but also republished using the original print films. This was a continuation of a tradition that had already begun with the book publication of the Runkel and America series in the 1960s and 1970s.

Individual issues of the space series were published in an enlarged format at the end of the 1990s. Since the book publisher Junge Welt was fully integrated into Tessloff Verlag at the beginning of 2006, the anthologies and reprint folders have been published by Tessloff Verlag . The entire Digedags series has been available in book form since 2007, whereby the inventor and space series have now been completely separated (in the booklets, both series were told alternately). In addition, since 1990 there has been a large number of merchandising items in the form of figures, lunch boxes, coloring and handicraft books, calendars, postcards to postage stamps, clothing and crockery with the motifs of Digedags.

In the meantime, older original issues, especially the previous copies of the Ritter-Runkelserie from No. 89 onwards and which are in good to very good condition, are sometimes sold at extremely high collector's prices. One of the estimated only 10 issues of No. 1 from 1955 in this good condition at the online auction house Ebay achieved the final proceeds of EUR 6605 in 2012.

The Contemporary History Forum Leipzig is showing a permanent exhibition on Digedags .

do not yet form an independent series, but build on each other in terms of plot. After a fairytale start in the Orient, a boat trip and an argument with pirates, the Digedags stranded on a South Sea island. There they build a circus after various adventures and go on a world tour. Booklets 3 and 5, in which animals are the protagonists, are not part of the ongoing plot.

include the Römer series. The story begins at the point where issue 12 ended and continues the story of the newly founded "Circus Digedag". A hurricane transports the Digedags with their ship to ancient Rome, where they make a career as a circus operator. Even the emperor is enthusiastic about them. In doing so, they arouse the envy of the old favorites of the Caesar. They conspire and send troops to Rome. The attack can be repulsed thanks to the Digedags. Because the people justly celebrate the Digedags as victor, they now also fall out of favor with the envious emperor and are put into the Foreign Legion. With their pranks they manage to create such a mess there that the Legion falls apart and the soldiers flee to their homeland. When the Digedags now learn that the emperor has now decided to send their circus animals to the arena with gladiators, Digedag separates from his companions in order to put everything in order in Rome. Meanwhile, Dig and Dag flee to Malta with their new friend, the Germanic cook Teutobold. There they get to know the scientist Sinus Tangentus. Together they succeed in preventing the construction of a war port on Malta. After defeating a Roman fleet, a meteorite is discovered in the sky which, according to Sinus Tangentus, must fall in the Sahara. He decides to find this one and the Digedags join him.

comprise the first part of the so-called space or Neos series, which is directly linked to the Roman series. The supposed meteorite turns out to be a spaceship from the planet Neos, which kidnaps Dig, Dag and Sinus Tangentus into space. On the Neos they come into conflict between the two states of this planet, the Republican Union and the Great Neonic Empire, which symbolize the contrast between socialism and capitalism . Later the Digedags accompany the spaceship captain Bhur Yham on a space expedition.

the first part of the inventor series, in which the development of the steam engine from antiquity to James Watt is told.

comprise the second part of the inventor series. The Digedags accompany important inventors of the 19th century, such as Werner von Siemens and Wilhelm Bauer .

include the Ritter Runkel series. They are set in the year 1284. Dig and Dag accompany the clumsy knight Runkel in search of a treasure that his father once had to leave behind in Asia Minor. Towards the end of the series, in issue 141, Digedag, who had left his companions during the Roman series, reappears. He rose to a high official post in the Empire of China.

from August 1969 include the America series. They play in the years 1860/61. The Digedags work as newspaper reporters in New Orleans. A series of entanglements leads them to the Rocky Mountains, where they discover a gold mine. They want to donate the gold to free the black slaves.

include the Orient series. In 1835 the Digedags help the Egyptian princess Fatima, who is held captive in Istanbul, to escape to her homeland.

once again include the first episodes of the Ritter Runkel series.

The so-called Black Series refers to several issues in the America series from excess stocks for foreign-language editions. In order to still be able to use the finished print sheets that were printed except for the text, a further small edition was printed with a time lag. In order to keep the costs as low as possible, the colored initials and the magenta-colored lettering “Mosaic” were omitted and these were also printed in black. The booklets are therefore available in two versions. The booklets of America series 176 to 183 and 185 to 187 are well-known. In addition, the otherwise white mosaic lettering was also printed in black on all booklets number 105 printed for export, including the German-language ones.

Dig, Dag and Digedag can be clearly distinguished from one another by their appearance, but their character is sometimes almost interchangeable compared to the later Abrafaxe . Nevertheless, some characteristics unfold:

What the Digedags have in common is standing up for justice and solidarity with the “little people”. The fact that the lines of the characters have been refined over the years can be seen in the three main characters. From the Ritter-Runkel series, but especially from the America series, they appear more curved and youthful.

Films and videos were produced based on the templates:

In addition, Pfeiffer wrote the Digedag universe , a large-format, richly illustrated encyclopedia from the Junge Welt publishing house, all about Hannes Hegen's mosaic and the Digedags. The lexicon is structured in several subject areas, under which the keywords are arranged alphabetically: inventions, vehicles, aircraft, locations, machines, minerals, people, ships, food, criminal records and animals. In some cases the lexicon offers information that goes beyond what can already be found in the booklets themselves.

In addition to the issues for the GDR and the booklets printed on better paper for the West German and Austrian markets, the mosaic was also temporarily sold in other countries:

The Digedags on the theater stage

The director for music theater Martin Verges from Berlin is the only playwright to have received permission from Hannes Hegen , the "father" of the mosaic , to bring the Digedags to the theater stage. The first piece "Ritter Runkel and the Digedags" (a spectacle with music based on the mosaic by Hannes Hegen, music: Walter Thomas Heyn ) premiered in Berlin in 2000. It was also performed in Rheinsberg (2001), Borna (2002), Harzer Bergtheater Thale (2003) and on the open-air stage Weissensee (2005).

Martin Verges' second mosaic production, “Ritter Runkels große Hour” (a musical based on the mosaic by Hannes Hegen, music: Karsten Wolf ) was very successful on stage in Bautzen in 2003 with almost 37,000 spectators. The Tessloff Verlag documented this performance on a DVD for posterity in 2006 (without ISBN or similar - the DVD has the entry “DOCdata Germany TESS 080806 L5” on the silver side on the ring hole).

The piece was also shown in Senftenberg, Schwedt, Annaberg-Buchholz and Plauen / Zwickau.

For the performances in Schwedt / Oder in 2004 and 2005 there was a musically different stage version (music: Arnold Fritzsch ).