Einar Kárason (born November 24, 1955 in Reykjavík ) is an Icelandic author.

From 1975 to 1978 he studied literature at the University of Iceland . Since 1978 he has lived as a freelance writer in Reykjavík. He is very active in the Icelandic Writers' Union, from 1988 to 1992 he was its chairman. Since 1985 he has been one of the directors of the Reykjavík Literature Festival . On January 27, 2009 he was awarded the Icelandic Literature Prize for his latest novel, Part 2 of the planned Sturlungar trilogy with the Icelandic title Ofsi (2008) .

The author began his writing career by publishing poems in literary magazines (1978-80). Later he also wrote novels. His barrack trilogy , which is set in a proletarian milieu in Reykjavík, became best known . The first volume Die Teufelsinsel / Þar sem djöflaeyjan rís (1983) was also a great success in Germany. The next volume Die Goldinsel / Gulleyjan received the literary award of the Icelandic newspaper DV in 1986 and was nominated for the literary award of the Nordic Council the next year . Three years later, the third volume of the trilogy The Promised Land / Fyrirheitna landið was on the shortlist for the Icelandic Literature Prize. The trilogy was also staged and the first volume was filmed as Devil's Iceland by Icelandic director Friðrik Þór Friðriksson . Einar Kárason wrote the script for the film adaptation.

Einar Kárason has published a number of other novels, including The Icelandic Mafia / Kvikasilfur in 1994 . He also started writing children's books in 1993. 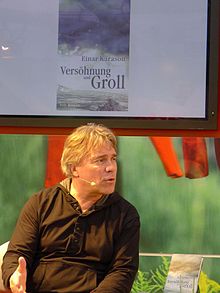 Einar Kárason also gives a very popular lecture at the University of Iceland on the Sturlungar gender and lectures on the Sturlunga saga in the Landnámssetrið museum in Borgarnes .