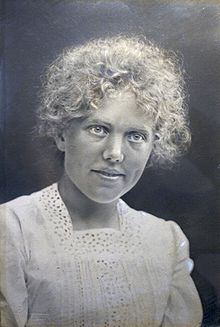 Photo from the family property, August 1905

After the death of her parents, she and her two brothers came to the workers' and poor house, which can be found in the north of Witzwort and has since been converted into an apartment building. About this time she later published the story Dat groote Hus. She attended a teachers' seminar in Schleswig and, as she wrote, “Would you be so good that you would be a good teacher.” She taught in small villages and later in Hamburg and Kiel.

In 1909 she married the editor of the journal Der Schleswig-Holsteiner Jacob Bödewadt († 1946). Both often changed their place of residence.

As the mother of five children, Andresen wrote her extensive works at night under her maiden name. “I was only allowed to work undisturbed poetry at night.” She created 30 plays , six novels and over 200 stories , novellas and sketches as well as several radio plays and poems, while she ran a large household during the day and often represented her husband in the editorial office. Historical, regional events from North Frisia and personal experiences are reflected in the works. Some works show Andresen's involvement in the German-Danish border fight - from 1921 she lived in North Schleswig , which had belonged to Germany until 1920. She always remained connected to the Low German language and wrote many successful stage plays in Low German.

She was a member of the Eutin poet circle founded in 1936 , one of the most important groups of authors in National Socialist Germany. Her book Die Stadt auf der Brücke (1935), which takes place at the time of the Hitler putsch and which extols National Socialism, was placed on the list of literature to be sorted out in the Soviet occupation zone .

In 1936 the family moved to Bremen, where Ingeborg Andresen spent the last 20 years of her life, from 1941 in the house of the Nordic Society .