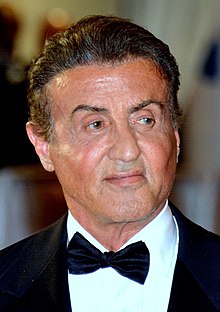 Sylvester Enzio "Sly" Stallone (* 6. July 1946 in New York City as Michael Sylvester Stallone Gardenzio ) is an American actor , film director , screenwriter , film producer and entrepreneur . He has been nominated three times for an Oscar and just as many times for the Golden Globe Award . He was awarded the latter in 2016. He is considered one of the most successful and famous action actors in film history.

Sylvester Stallone was born Michael Sylvester Gardenzio Stallone in New York City. His brother Frank Stallone is also an actor, singer and songwriter . His father Frank Stallone Senior (* 1919 in Gioia del Colle , Bari ; † July 11, 2011 in Wellington , Florida ), an Italian immigrant, Anglicized the originally Italian family name Staglione in order not to be confused with various members of the New York underworld. His mother is Jacqueline Frances Stallone (née Labofish; born November 29, 1921 in Washington, DC ), a US-American woman of half French (from Brittany ) and half Ukrainian-Jewish (from Odessa ) descent. An inserted forceps caused nerve damage and permanent muscle paralysis of the lower left half of the face, which particularly troubled him during his childhood. Because of this paralysis, his teachers initially advised him against an acting career.

Stallone grew up in a suburb of Philadelphia . In elementary school he took his first steps as an amateur actor and enjoyed success as a football player in the national league. For two years, Stallone was also trained at the American College of Switzerland , Leysin . Here he had his first stage appearance in Death of a Salesman in the role of Biff. Back in the United States , he enrolled at the University of Miami and began as a writer to try. However, Stallone left the university before graduation to pursue an acting career. First, with little success, he joined with 24 years of lack of money for 200 US dollar as the main character Stud ( English stallion ) in the erotic film Kitty & Studs - The Italian Stallion on. In addition, Stallone also took on small roles in films by Woody Allen ( Bananas ) and Dick Richards ( Drive to Hell, Darling ) .

The breakthrough for Stallone was the boxer drama about Rocky Balboa , a boxer and nobody from Philadelphia. Inspired by a fight between boxer Chuck Wepner and then world champion Muhammad Ali , Stallone wrote a script within a few days and offered it to some film producers on condition that they play the leading role. He finally prevailed. Rocky was shot on a budget of just under 1.1 million US dollars and was a big surprise hit at the box office in 1976. The film made Stallone an overnight star, was nominated for an Oscar in ten categories in 1977 and won the award for best film , best director and best editing . Stallone himself received nominations for Best Actor and Best Original Screenplay . At the same time, only Charlie Chaplin and Orson Welles had been nominated for a film in these categories .

The multiple sequels of Rocky , which he himself directed as a director, with the exception of the fifth part, were less demanding than the original and focused more on action, but corresponded to the zeitgeist of the 1980s. Overall, the series is considered to be one of the most famous cinematic depictions of the American Dream . The commercial success continued. Stallone became one of the most popular actors in the world for that decade.

In 1978 Stallone made his debut as a director with the film Vorhof zum Paradies . Meanwhile, he also tried his hand at projects like Norman Jewison's union film F.IST - A man goes his way - a typical New Hollywood film . Here Stallone played the main role and worked on the script.

Another commercial success achieved Stallone 1982 with Rambo , based on the bestselling novel First Blood by David Morrell (published 1972). Here Stallone dealt critically with the Vietnam War and the mood of the American population towards the US military at the time . The film was controversial among critics. Stallone shot sequels here too. These in turn rely more on action, even more patriotism and the associated zeitgeist of the Reagan era and the Cold War .

In 1983, Sylvester Stallone directed the sequel to Saturday Night Fever with John Travolta . The film Staying Alive received very negative reviews, but it became a considerable commercial success. Stallone reached the peak of his popularity in 1985: With Rambo II and Rocky IV he was responsible for two of the three most commercially successful films of the year .

The film Die City-Cobra was released in 1986 . The title landed 15th in the US annual charts from 1986. The subsequent films Over The Top and Lock Up flopped at the North American box office, but each attracted over a million viewers in Germany. When the sequels to his star roles Rocky and Rambo disappointed - the grossing of Rambo III in the United States was only a third of its successful predecessor, and Rocky V became one of his biggest flops - Stallone's career stalled.

Stallone with Brigitte Nielsen and the US presidential couple Nancy and Ronald Reagan on October 8, 1985

Attempts to improve his martial image in the 1990s through humorous interludes in films such as Oscar - From the rain in the eaves and Stop! Or my mommy shoots! to loosen up failed. Stallone saw that the general public only accepted him as an action actor. With films like Cliffhanger - Only the Strong Survive , Demolition Man and The Specialist, he built on his successes from the 80s. Later, however, typical action hits like Judge Dredd , Assassins - Die Killer and Daylight also flopped at the US box office.

In 1997, Stallone won over audiences and critics with his acting performance in Cop Land . For his role as the overweight sheriff in a small town predominantly inhabited by police officers, he had gained an extra 15  kg and was able to survive alongside colleagues such as Robert De Niro , Harvey Keitel and Ray Liotta .

The following films, Get Carter - The Truth Hurts and Driven , again proved to be big flops. As a result, a number of films were made with money from German film funds that were only briefly in cinemas or, like Avenging Angelo or Shade , never even started in German cinemas.

For his comeback , Stallone began working on sequels to his most successful roles Rocky and Rambo , which he had long refused to shoot. In December 2005, the shooting of Rocky Balboa began, which opened in German cinemas in February 2007 and brought the long-awaited success at the box office. With the also successful fourth Rambo film released the following year, Stallone finally managed to gain a foothold in Hollywood again. 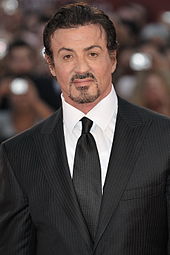 In August 2010, the action film The Expendables was released . In addition to the main role, Stallone again took on the script and direction for this. This was the first time he was behind the camera 27 years after Staying Alive for a film that was not part of the Rocky or Rambo franchise. On the opening weekend, the film grossed just under 35 million US dollars - a record in Stallone's career. In mid-September, he passed the $ 100 million barrier in the United States. Stallone had last achieved this 25 years earlier with Rocky IV . The film grossed almost $ 275 million worldwide. The success of the film led to two sequels that grossed an additional $ 500 million worldwide.

In 2013, Stallone appeared in three movies for the first time in his career. However, both the action films Shootout - No Mercy and Escape Plan and the sports comedy Two of the Oldest Flop flopped in the United States, each with grossing less than $ 30 million. Escape Plan , however, was an international success and grossed over 100 million US dollars abroad alone.

The 2015 boxer film Creed - Rocky's Legacy , in which Stallone slipped into the role of Rocky Balboa for the seventh time , proved to be a huge hit with audiences and critics. The film grossed over 100 million US dollars in the United States alone and, after almost 40 years, gave Stallone another Oscar nomination and the first Golden Globe Award.

On May 21, 2007, Stallone was fined AU $ 12,000 in Australia for illegally importing growth hormones  . On February 16, 2007, Stallone had concealed 48 ampoules with the muscle building preparations Jintropin and testosterone in his luggage when he entered the country. When officers tried to search his hotel room three days later, he threw four vials of testosterone out the window.

In the course of the US elections in 2008 , Stallone was one of the supporters of the presidential candidate John McCain, along with other well-known actors such as "Terminator" Arnold Schwarzenegger and "Superman" Dean Cain .

In 2009, while filming The Expendables , Stallone was injured in a fight scene with Steve Austin and contracted a hairline crack in one of his cervical vertebrae, which was followed by four operations during which a metal plate was placed on his neck. As a result of this neck fracture Stallone may in future no longer perform stunts as the next injury to his spine, a spinal cord injury could have or even his death.

Stallone at the premiere of The Expendables 3 in August 2014

In the German language versions of his films, Stallone was dubbed from 1981 to 2018 by Thomas Danneberg , who already spoke him in two films in 1970 and 1974. Between 1976 and 1979 he was spoken by Jürgen Prochnow . Due to a serious illness, Danneberg retired at the beginning of April 2019. Since then, Prochnow has been speaking Stallone again.

Stallone suffered an injury to the VII cranial nerve ( facial nerve ) at birth . The lower left section of his face is paralyzed as a result, along with parts of his lips and chin, which creates his typical facial expression. As a child he was teased for it, but now his restricted facial expressions and slightly slurred pronunciation have become a trademark.

During his career, Sylvester Stallone was nominated for several prestigious film awards. Most of the nominations are due to the boxing drama Rocky, for which he was able to gain attention both as an actor and as a screenwriter. The following years of his career were predominantly dominated by negative prices, so he received the Golden Raspberry ten times .

In 2011, Stallone was inducted into the International Boxing Hall of Fame .

Due to the renewed boxing drama Creed - Rocky's Legacy , Stallone was again one of the nominees at the Oscars and Golden Globes after almost 40 years and was able to win the latter. For this step he also received the Raspberry Redeemer Prize .

A total of 34 prizes and 34 nominations were awarded to Stallone, the following selection lists the best known.