from Wikipedia, the free encyclopedia
This is the spotted version , flagged on May 18, 2020 . There is 1 pending change that has yet to be viewed.

In the Hong Kong film industry , Chan was initially marketed like many others as the successor to Bruce Lee , who died in 1973 and whose death had dealt a severe blow to the Hong Kong film industry. Filmmakers were looking for a new Bruce Lee, while Chan never saw himself as his successor. He created his own fighting style, which is characterized by acrobatics and comedic interludes and thus differs significantly from Bruce Lee's style based on seriousness.

In November 2016 he was awarded the honorary Oscar for his life's work.

Jackie Chan grew up in a poor family who fled to the British colony of Hong Kong during the Chinese Civil War . Charles and Lee-Lee Chan first lived in poor ghettos , but were soon employed by the French consul , where Chan's mother became a maid and his father a cook. They lived in the exclusive villa suburb of Victoria Peak , although they lived quite isolated from the western world. Since his father mastered Chinese fighting techniques, he taught this chan early in his childhood. At the age of seven, his parents sent him to the China Drama Academy, the Peking Opera School (a kind of boarding school that specializes in martial arts, singing and acting) under the guidance of the strict master Yu Jim-Yuen to become the hyperactive Chan there among other things, could learn discipline, but also fighting (including Kung Fu ) and acting. It was there that he met his later friends, Sammo Hung and Yuen Biao . Other well-known “opera brothers” (ie former classmates at the Peking Opera School) of Jackie Chan are Corey Yuen , Yuen Wah and Yuen Man Meng .

He was sent to this school because his parents took a job in Australia and couldn't take him with them. In addition, his performance in the elementary school he had previously attended had been miserable. After his parents moved, he was adopted by the master of the academy. The training at the Peking Opera School was tough: from dawn to midnight, the students were occupied with acrobatics , dancing, singing, "worship" and reading and writing (which, however, was of relatively minor importance). Beatings were not uncommon as punishment . According to the school contract, Chan was tied to the head of the school for ten years, which he even chose himself, because at the beginning he found the surroundings exciting and promised a lot of fun. When his father asked him how long he wanted to spend at school, he replied, "Forever!"

Chan followed his parents after finishing school and a rather volatile life in bars and arcades . Among other things, he worked in the construction industry , where he also got his name Jackie, as he spoke little English and the name of his foreman , who was called Jack, was imprinted on his work colleagues, who couldn't get his Chinese name off their lips. "Little Jack" became "Jacky" and he decided to use the spelling "Jackie". However, there are also films in which you write it with a y , and they are older films. In Superfighter 2 , his last name was spelled with an e . 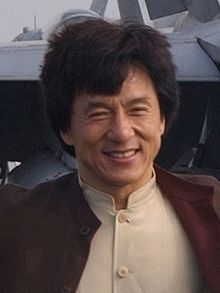 At the age of seven, Chan made his film debut in Big and Little Wong Tin-Bar . By the time he left school at the age of 17, he worked on four more films. He then found work as a stuntman , including in Bruce Lee's Fist of Fury and Enter the Dragon . The competition was fierce, but Chan managed to stand out from the crowd of stuntmen through particularly daring actions. In this way he got his first roles as an actor and also worked as a stunt coordinator, even as the youngest in Hong Kong's film history. However, the new star failed several attempts to conquer the American market. In 1981 he played in the very successful ensemble clothing On the Highway All Hell Is Losing (Cannonball Run) alongside stars like Roger Moore , Burt Reynolds , Dean Martin and Farrah Fawcett . He was also seen in the 1984 sequel alongside the aforementioned stars, but failed completely at the box office with his own film The Protector in 1985. Although he did not make a breakthrough in America, he did not give up and made several very successful films in Hong Kong, such as Police Story and its sequels. Jackie Chan achieved success through breathtaking stunts in his films, which he completed courageously, but also often with injuries. Many of them were even life-threatening: since a fall in Armor of God (The right arm of the gods) , Chan is hard of hearing in one ear. This film almost cost him his life when he fell from a tree and landed on his head. Since that fall, he has had a hole in his head that is sealed with a plastic stopper. However, it's just a myth that Chan did all of his stunts himself; certain stunts require specially trained stuntmen, some stunts he was unable to do due to lack of time or prevention, and in other cases the stunt simply looked better when performed by another stuntman.

Finally, in 1994, the American public became aware of Chan: through Rumble in the Bronx , which was the first of his films to make it to the top of the American box office charts . He was now gaining new fans all over the world, and his earlier films became well known outside of Asia, especially in video stores . Jackie Chan now enjoys a high reputation worldwide and runs many charitable drives outside of filmmaking, owns shares in the famous restaurant chain Planet Hollywood and campaigns for tourism in his hometown. Among other things, Jackie Chan also became a great idol in Europe , where he was also the role model for many martial artists .

His work includes over 80 films in which he has a role as an actor - over 60 with a leading role and a total of participation, including singing, in over 140 films.

Jackie Chan has been married to Taiwanese actress Joan Lin Feng-Chiao ( 林鳳嬌 ) since 1982 , with whom he has a son named Jaycee Chan , who works as a singer, actor and director. After an affair with Miss Asia in 1990 Elaine Ng Yi-Lei , he has an illegitimate daughter, Etta Ng Chok Lam.

Jackie Chan will bequeath about half of his fortune to the Jackie Chan Charitable Foundation . In 2006, US magazine Forbes named him "one of the ten most generous celebrities in the world". In 2003, Jackie Chan fell in love with the Berlin bears when he was in Berlin for several weeks to film about In 80 Days Around the World . He had himself photographed for a poster with a few hundred of the Buddy Bears . In 2004 he organized a visit to the United Buddy Bears in Hong Kong. At the opening, he was able to hand over three checks totaling HKD 1.43 million to UNICEF and two other children's organizations. Since then, Chan has held annual worldwide painting competitions - not just for children and young people - all about bears.

Jackie Chan came under fire several times when he commented on the current freedom of speech and human rights with the following statement : “I have more and more the feeling that we need to be controlled. If we are not monitored , we will do what we want. ”Speaking to politicians and business people in Boao , he said that too much freedom could lead to chaos“ like in Hong Kong or Taiwan ”.

These statements in an interview with the South China Sunday Morning Post led to harsh criticism from the Taiwanese government.

Mentioned in the Panama Papers

At the beginning of April 2016, a list published by the ICIJ announced that Chan was involved in the tax and money laundering scandal published as part of the Panama Papers .

Jackie Chan suffered a number of serious injuries while making his films:

He suffered numerous other broken fingers and back injuries while filming other films.

Jackie Chan was dubbed in Germany by Christian Tramitz , Jan Odle and Stefan Gossler , among others . Jackie Chan's German dubbing voice has been Stefan Gossler since Rumble in the Bronx . Thanks to its extensive language skills (including English , Japanese , Thai , Taiwanese , Mandarin , Cantonese , Korean ), he is able to many foreign versions of his films themselves synchronized . 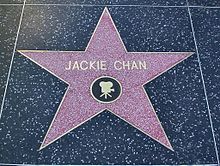 Star on the Hollywood Walk of Fame

Jackie Chan's star on the Avenue of Stars in Hong Kong

Since 2016, Chan, together with the US racing driver David Cheng , has been co-owner and namesake of the Le Mans motorsport racing team Jackie Chan DC Racing (formerly Baxi DC Racing Alpine ). In the 2015/16 season , the team, for which Alex Brundle and Oliver Jarvis drive alongside Cheng , won both the drivers' and the team championship at the Asian Le Mans Series . The idea for this collaboration came up in March 2015 when Cheng and Chan met for the first time and Chan spoke of his enthusiasm for Steve McQueen and his film Le Mans . France