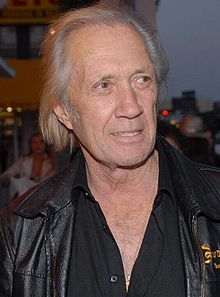 After an eventful youth - Carradine was in various boarding schools and reform schools and “collected […] juvenile sentences ” (as he himself summed it up in an interview) - he first studied music theory and composition at San Francisco State University . Working in a Shakespeare theater company at the university sparked his interest in acting. Two years of military service followed the studies. After that, from 1963, there were guest appearances in various US television series .

Carradine's best-known role was that of Kwai Chang Caine in the 1970s television series Kung Fu . In the follow-up series Kung Fu: Under the Sign of the Dragon from the 1990s, Carradine played the role of Kwai Chang Caines grandson of the same name, who meets his son Peter again after a long separation. In the 1980s series Torches in the Storm , he played the southern villain Justin LaMotte.

He also played in various cinema productions, such as the leading role in Ingmar Bergman's Das Schlangenei , the title role in Quentin Tarantino's Kill Bill 1 and Kill Bill 2 and as an opponent of Chuck Norris in McQuade, the Wolf (1983). He had another leading role in 1976 in This Land is My Land , a film adaptation of Woody Guthrie's biography and in the road movie Cannonball . In total, Carradine has acted in more than 100 films. For a long time he had various German-speaking voice actors; Only in the last few years has he got a firm voice with Frank Glaubrecht .

David Carradine has directed three feature films (You and Me, Mata Hari, Americana) as well as several episodes of the television series Kung Fu and Lizzie McGuire . In the latter, his half-brother Robert Carradine played Sam McGuire .

In addition to acting, he occasionally devoted himself to writing. Of his three works, Spirit of Shaolin - A Kung Fu Philosophy was the first to appear in German in 2006. Only in the American original did his autobiography Endless Highway and the Kill Bill Diary exist until the end .

David Carradine was an environmental advocate and supported the Sea Shepherd Conservation Society in its fight against seal hunting and whaling .

On June 4, 2009, David Carradine was found dead in a hotel room in Bangkok. The death resulted from an autoerotic accident . According to his manager, Carradine was filming the film Stretch by French director Charles de Meaux in Thailand. Carradine was buried in Forest Lawn Cemetery in Hollywood on June 13, 2009 .