The title of this article is ambiguous. For the American guitarist and music producer of the same name, see Roy Rogers (guitarist) . 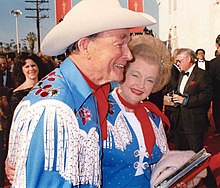 Roy Rogers (born November 5, 1911 in Cincinnati , Ohio as Leonard Franklin Slye ; † July 6, 1998 in Apple Valley , California ) was an American country singer and actor , who was primarily known as "Singing Cowboy" in numerous westerns became known between 1938 and 1953. As the founder of the band Sons of the Pioneers , he was one of the stars of country music.

Rogers was born to the poor couple Andrew ("Andy") Slye and Mattie Womack. In 1912, Rogers' father, disappointed with city life, built a houseboat that the family used to travel up the Ohio River and settle near Portsmouth , Ohio. In 1919 the family bought a farm in Ohio. However, Rogers' father quickly realized that the farm could not support his family and worked in various factories. Meanwhile, his son Roy developed his riding skills, which were later shown in his films. After years of poverty and hard work, he hitchhiked to California in 1930 , where he made a living as a day laborer for a while.

He entered the local music scene through a singing competition. Here he met Bob Nolan and Tim Spencer, with whom he founded the Pioneer Trio in 1933, from which the Sons of the Pioneers emerged. The group soon enjoyed great success. Despite regular concerts and radio recordings, the Sons of the Pioneers found time to take on minor roles in western films. In 1937, Rogers replaced the western star Gene Autry in the adventure film Under Western Stars , who had fallen out with his studio. After just a few films, he had surpassed Autry in the audience's favor and had become the most famous cowboy actor. There were Roy Rogers action figures, Roy Rogers novels, a Roy Rogers comic, and more than 2000 fan clubs. He earned $ 50 million a year just from marketing the fan articles.

In 1946, a group of actors and investors, including Rogers and the Sons of the Pioneers , founded the Pioneertown settlement northwest of Yucca Valley . This should serve as a backdrop for western films , but it should still be able to be used by the film crews after the end of shooting. For this purpose, buildings were erected that looked like a typical western town from the 19th century. Inside, however, they housed modern facilities such as ice cream parlors , a bowling alley or motels . Originally the new place was to be named after Roy Rogers Rogersville . Ultimately, however, it was named after the Sons of the Pioneers .

In 1947 Rogers married his third wife, film and singing partner Dale Evans . This marriage resulted in a daughter who was born with Down syndrome and died shortly before her second birthday. In addition to his three children from his first marriage, Rogers and Evans adopted other children. Together they sang the theme song she wrote, Happy Trails to You, Until We Meet Again ... her television show The Roy Rogers Show .

In parallel to his acting activities, Roy Rogers continued to record, occasionally with his old friends from the Pioneers and with his wife. In 1972 he had another hit with Candy Kisses . In 1991 the album Tribute was created , with which many current stars of country music such as Clint Black and Randy Travis honored the 79-year-old Rogers. Rogers was inducted into the Country Music Hall of Fame twice, in 1980 as a member of the Sons of the Pioneers and in 1988 as a solo artist.

In 1967 the Roy Rogers - Dale Evans Museum opened in Victorville , California , directly on Route 66 . Various items of clothing, pictures and saddles were exhibited in the museum, as well as the prepared horses Trigger and Dales Buttermilk and Rogers' sheepdog Bullet, who had accompanied him in numerous films. The museum moved to Branson , Missouri in 2003 and was closed in late 2009 due to declining visitor numbers.