Clara Gordon Bow (born July 29, 1905 in Brooklyn , New York - † September 27, 1965 in Culver City , California ) was an American actress who came to fame in the late silent film days. She is considered a sex symbol of the 1920s and through her participation in the comedy It (That Certain Something) as "the first It girl ".

Clara Bow had a difficult childhood as the daughter of a schizophrenic mother and an alcoholic father, both parents attacking her. After winning a beauty contest, she was discovered for the cinema and made her first film at the age of seventeen. In 1924 she was voted one of the WAMPAS Baby Stars of the Year. She had her breakthrough to star in 1925 with the films The Plastic Age and Dancing Mothers , which she showed alongside Alice Joyce .

In her other films, her studio, Paramount , developed her into one of the most famous flappers of the time. In terms of popularity, she was able to compete at times with Colleen Moore - who made a hairstyle known as bob hair and the image of the flapper in the film Flaming Youth in 1923 - and Joan Crawford .

Above all, the cast with the lead role in the film It from 1927 led to the fact that to this day in the USA an attractive woman with a strong presence is referred to as an It girl . It was the film adaptation of a novel by the then extremely popular writer Elinor Glyn . A nationwide Publicityschlacht was beaten by Paramount to find exactly the actress It was, so to speak, that certain something. Miss Glyn personally selected Clara Bow and her career skyrocketed. At the time, the press reported intensively on Clara's love life, which could well be described as 'turbulent'. She sometimes had affairs at the same time. a. with personalities like Bela Lugosi , Gary Cooper , Victor Fleming or John Gilbert .

In addition to the usual romances, Bow occasionally played in sophisticated films - for example in the 1927 war drama Wings , which won the Oscar for best film at the first Academy Awards . The actress was Paramount Studios' biggest female star at the time .

With the beginning of the sound film era , the public's taste began to change and Bow's image as a flapper and it girl no longer suited the time of the Great Depression . With Nancy Carroll , Marlene Dietrich , Ruth Chatterton , Kay Francis and Frances Dee , other female stars were now available to the studio. Her previous sponsor BP Schulberg found a replacement for Bow in the young actress Sylvia Sidney , whose weight problems also counteracted her previous image as a sex symbol. She lost the lead female role in City Streets to Sidney and left the studio after a heated argument.

Bow was an ex-star in the eyes of most people after a court scandal about her former private secretary raged. Thanks to the melodrama Call Her Savage , however, she was able to start a comeback at the old Fox studios in 1932. MGM wanted to cast her for the comedy film Feuerkopf , but mental problems prevented her from working. The role went to Jean Harlow , who had played a small role in the Clara Bow film The Saturday Night Kid a few years earlier . The next year, Jean Harlow parody some aspects of Bow's personal life in the film Bombshell .

Bow made one last film and retired into private life on a ranch in Nevada in 1933, where she lived with western actor and politician Rex Bell , whom she married in 1931. There she had two sons. Her psychological condition deteriorated noticeably, she became shy of people and made a suicide attempt in 1944 . In 1949 doctors diagnosed her with schizophrenia . Bow did not return to her family in Nevada after the diagnosis, but lived the rest of her life with a caregiver in a bungalow in Culver City. In the last years of her life, she experienced a rediscovery of her films. She died of heart failure in September 1965 at the age of 60 . 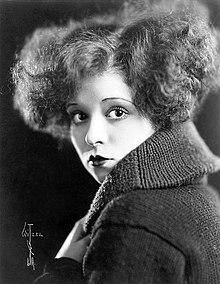