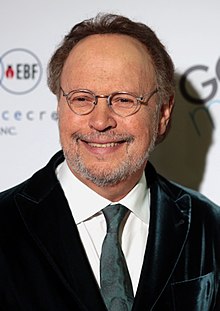 Billy Crystal was born the son of Russian-Austrian Jews. After high school, Crystal went to film school and formed the theater company Three's Company with two friends . His first job in television was as a writer, producer and actor on the comedy show The TV Show , which also featured his best friend, later director Rob Reiner .

His breakthrough came in 1977 with the successful sitcom Soap - Trautes Heim , in which he played a homosexual, which at the time was still considered a taboo. After the series was canceled , he developed his own stage program and toured numerous comedy clubs as a stand-up comedian until the mid-1980s .

In 1984, Crystal first appeared on the Saturday Night Live show . He was soon an integral part of the cast ensemble, which at the time included greats like Jim Belushi , Dana Carvey , Eddie Murphy and Martin Short .

As a film actor, Billy Crystal had his greatest successes in the late 1980s and 1990s. His most important films as an actor include Harry and Sally (1989), City Slickers (1991) and Reine Nervensache (1999). In 1992, his directorial debut The Last Comedian was nominated for an Oscar.

His dry humor and witty sayings make him one of the most popular entertainers in the USA. In 2007, Crystal was awarded the Mark Twain Prize for American Humor. From 1986 to 2010 he hosted the annual charity show Comic Relief together with Robin Williams and Whoopi Goldberg . Crystal first hosted the Academy Awards in 1990. According to his own statements, he was fulfilling a childhood dream. He also hosted the gala in 1991, 1992, 1993, 1997, 1998, 2000, 2004 and - after Eddie Murphy's cancellation - also in 2012.

He has been married to Janice L. Goldfinger since 1970, with whom he has two children. His daughter Jennifer Crystal , born in 1973, works as an actress.

In 1992 he was Jay Leno's first guest on the Tonight Show with Jay Leno , and in 2014 he was the last after Jay Leno left. Crystal is a big fan of the Los Angeles Clippers and, whenever possible, never misses a home game of the basketball team.