Hugh Michael Jackman (born October 12, 1968 in Sydney ) is an Australian actor , film producer and singer , best known as Wolverine in the X-Men film series and through the action thriller Password: Swordfish (2001). He is also very successful as a musical actor , especially with the role of Peter Allen in The Boy from Oz and as Jean Valjean in Les Misérables (2012). Together with John Palermo he founded the film production company Seed Productions .

Jackman is the youngest of five children of Christopher John Jackman and Grace McNeil, who immigrated to Australia from England in 1967. From his mother's second marriage, a half-sister, eight years younger than him, was later added. Mother Grace left the family in 1976 when Jackman was eight and went back to England. He was raised by his father, Chris, a Cambridge graduate accountant . Hugh Jackman has been married to actress Deborra-Lee Furness since 1996 . The couple live in New York City and have two adopted children, a girl (* 2005) and a boy (* 2000). In November 2013, Jackman announced that he had skin cancer . A basal cell carcinoma was surgically removed from him.

Even in school, Jackman excelled in the sports of rugby , cricket and swimming , and also in school performances. In 1988 he began to study communication science with a journalistic focus at the University of Technology in Sydney ; In 1991 he graduated with a Bachelor of Arts (communication).

While studying, he took an acting course and then decided to become an actor. Jackman turned down a role offer for the Australian television series Neighbors and instead began an acting training at the Western Australian Academy of Performing Arts (WAAPA), which he finished in 1994. Immediately afterwards he received the offer to participate in the ten-part television series Correlli . He played the role of a prisoner who falls in love with the prison psychologist Louisa Correlli (played by Deborra-Lee Furness). During the filming, Jackman and Furness became a couple.

After Correlli some performances followed on television. In addition to Melissa Hoyer, Jackman hosted the program In Fashion (at Foxtel), hosted the “Fox Studio Australia” opening show in Sydney and presented a Foxtel special about London's theater scene in “Hugh Jackman's West End”.

In 1995 Hugh Jackman worked as a musical performer in the Australian production of Beauty and the Beast . He received the MO (Australian Tony Award) for "Best Actor" and also the Variety Club Award for "Best Male Actor in a Musical". The musical Sunset Boulevard followed . Jackman has found international recognition since his portrayal of the Curly in the musical Oklahoma! which was performed at the London National Theater in 1998/99 and filmed in 2000. He also played in other plays such as Romeo and Juliet (Romeo) , Translation (Hugh) , Tonight We Improvise (Abette) and Barbarians (Maxim Gorki).

In 1998 Jackman made his screen debut in the Australian film Trucker with a Heart in the role of trucker Jack Willis, who writes down his unhappy love in a romance and publishes it under the name of his beloved. In the same year he also made Halifax - Afraid of the Dark for television. Erskineville Kings followed a year later . Jackman plays the role of Wace here. The highlight of his career at that time was his appearance in front of 90,000 spectators when he sang the Australian national anthem before the opening game of the Bledisloe Cup ( rugby union ) in Melbourne in 1997 . In 1999 he was named both “Most Fashionable Man in Australia” and “ Australian Star of the Year ”.

For the film X-Men , which laid the foundation for his international film career, Jackman was hired at the last minute because the originally intended Dougray Scott was needed two months longer than planned for the filming of Mission: Impossible II . After the two sequels from 2003 ( X-Men 2 ) and 2006 ( X-Men: The Last Stand ) , Jackman also took on the role of Wolverine in the offshoot film X-Men Origins: Wolverine . The film, in which Jackman also worked as a producer, was released in Germany on April 29, 2009. Other films in the X-Men series followed.

In 2003 and 2004 he played the leading role of Peter Allen in the Broadway musical The Boy from Oz and won the 2004 Tony Award for Best Actor . In 2006 he toured Australia with an arena version of the musical.

Jackman can always be seen as an entertainer. For example, in 2003, 2004 and 2005 he hosted the Tony Awards ceremony and is a regular guest on various television programs. In 2009 he hosted the Academy Awards . Occasionally he also posed for fashion magazines (for example Men's Vogue November / December 2006).

Jackman was seen in the 2006/07 comedy Scoop , lent his voice to cartoon characters in Happy Feet and Flushed Away , gave life to the main character in The Fountain and, in spring 2007, was a magician driven by vengeance and glory in prestige master to see the magic in the cinema. In 2007 Jackman co-produced Viva Laughlin , a musical crime TV series. He played in the first episode himself. The series was canceled after the first two episodes were broadcast due to low ratings and bad reviews. 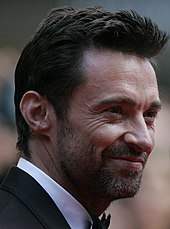 In spring 2007 - immediately after The Boy from Oz's arena tour  - Jackman shot a thriller with the working title The Tourist . It is the second production by Seed Productions. After legal quarrels about the name, the film started with moderate success in the USA in May 2008 as Deception . The film was not released in Germany, it is only available on DVD. Hugh Jackman plays a scheming murderer in it.

In the same year Australia by director Baz Luhrmann appeared , in which Jackman played the male lead alongside Nicole Kidman . During the premiere tour of Australia, which in December 2008 went halfway around the world, Jackman was named " Sexiest Man Alive " by People magazine and he was offered the role of host for the Academy Awards.

Jackman has been supporting the children's aid organization World Vision since the age of 9 , and has also been an ambassador since the beginning of his acting career. In 2009 he traveled to Ethiopia with his wife and visited the coffee farmer Dukale. This resulted in the documentary Dukale's Dream .

In May 2011, he performed a vocal show at the Curran Theater in San Francisco. He was supported by an 18-piece orchestra. The focus was on musical numbers, including from Carousel and The Boy from Oz. He performed this show in Toronto in July. Since mid-2011, he was also featured in an advertisement for Lipton iced tea on German television . In September 2011, he appeared on the WWE Raw Super Show as a guest and was the manager of Zack Ryder .

In early September 2011 it was announced that Hugh Jackman would star alongside Russell Crowe as Jean Valjean in the remake of Les Misérables . For his performance, he received the Golden Globe Award in the category Best Actor - Comedy or Musical , and it also earned him an Oscar nomination. In 2013 he starred in Warner Bros. Canadian crime drama-thriller film Prisoners .

For the German dubbing of his appearances Jackman is mostly spoken by Thomas Nero Wolff .

In 2017 he starred in the musical film Greatest Showman with Zac Efron and Michelle Williams . The cinematic work is a biography of the circus pioneer PT Barnum of the 19th century. The role as PT Barnum earned another Golden Globe nomination. The film's soundtrack broke world records and achieved multi-platinum status in many countries including the UK and America. For the singles A Million Dreams and The Other Side he received a platinum award in the USA. For the title From Now On it was enough to receive a gold award.

With his show program “The Man. The Music. The Show “Jackman is on a world tour in 2019 and 2020 and will give around 100 concerts in six months. In Germany, he performed in Hamburg, Berlin, Cologne and Mannheim in May 2019.