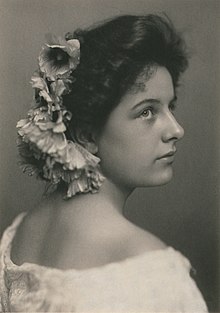 Farrar began her training with Mrs. JH Long in Boston at the age of twelve and continued with Emma Thursby and Victor Capoul in New York. In 1899 she came to Paris and became a student of Ange-Pierre de Trabadelo , then she completed her studies with Lilli Lehmann in Berlin. After her stage debut at the Berlin Hofoper in 1901 as Marguerite in Faust , she sang in Giuseppe Verdi's Rigoletto in Berlin in 1906 as partner of Enrico Caruso . Until 1906 the American was a member of the Berlin Court Opera; she was friends with the German crown prince and his family. During this time she made guest appearances in Monte Carlo, Paris, London, Stockholm and Brussels. In Monte Carlo she sang the title role in the world premiere of Mascagnis Amica in 1905 , in 1906 in the world premiere of L'ancétre by Camille Saint-Saëns and the world premiere of Le Clown by Victor Capoul (libretto) and Isaac de Camondo (music).

From 1915 she also appeared as an actress in silent films ; until 1917 exclusively under the director Cecil B. DeMille . Her best-known roles in DeMille include Carmen (1915) and Joan the Woman (1917). Wallace Reid was often her film partner.

Her numerous recordings made her at times one of the best-selling female singers on Victor Records , with critics particularly praising her duet recordings in contrast to the solo records .

She ended her operatic career at the age of 40. In the 1930s, she appeared as a radio commentator on broadcasts of opera performances by the Metropolitan Opera before retiring.

Her father was the baseball player Sid Farrar .

In 2019, the Monaco Post Office dedicated a special stamp to her.