Roddenberry was born in El Paso, Texas in 1921. He briefly attended Los Angeles City College . During World War II he was a B-17 bomber pilot in the American Army Air Forces . He flew a total of 89 sorties during the Pacific War and received the Distinguished Flying Cross for his achievements . After he was honorably discharged from the USAAF with the rank of captain in July 1945 , he worked as a pilot with the PanAm until 1949 .

In June 1947 he received a commendation from the then Civil Aeronautics Authority (now the Federal Aviation Administration ) for his services during the rescue mission after the crash of PanAm Flight 121 ( Clipper Eclipse ) over the Syrian desert. From 1949 to 1956 he was a sergeant in the Los Angeles Police Department . There he was investigative chief of the Office of Chief of Police and prepared speeches for his superior Chief William H. Parker (1905-1966).

Since the early 1950s, Roddenberry has written scripts for numerous US television series, including Police Report , Patrol Car 2150 , Dr. Kildare , Merciless City , The US Steel Hour, and Have Gun, Will Travel (lead author). In 1959 he tried to accommodate his first self-designed series 333 Montgomery Street ; however , the pilot film produced was rejected. The main role in it played DeForest Kelley , who later became Dr. "Pill" McCoy became famous in Starship Enterprise . In 1963, Roddenberry was lucky with The Lieutenant . MGM bought the series, which dealt with the Marine Corps in peacetime. The leading roles were starred with Robert Vaughn and Gary Lockwood .

In 1964, interest in Spaceship Enterprise arose at the then independent studio Desilu Productions , which NBC was able to convince Roddenberry to provide USD 20,000 to film one of three episode templates based on the series concept. NBC decided on The Cage (English title: The Cage ). Production of the pilot lasted from October 1964 to February 1965. The presentation on NBC was a disaster: The film was too expensive ($ 630,000 instead of the usual $ 160,000 to $ 180,000), too long (65 minutes instead of 50 minutes for series episodes ) and the suggested internationalism seemed out of date in the West.

Nevertheless, it was decided - against all expectations - to commission a second pilot film. On September 8, 1966, the first episode The Man Trap (English title: The last of its kind ) was broadcast on NBC. Starship Enterprise did not achieve particularly high ratings in the first broadcast . The fans of the series, who call themselves Trekkies , made sure, through organized letter campaigns, that a total of 3 seasons with 79 episodes were filmed by September 1969. Ultimately, however, there was no commercial success and the series was discontinued. In 1969 Roddenberry and Majel Barrett married ( starred as sister Christine Chapel on the series). The two have a son, television producer Eugene Wesley "Rod" Roddenberry Jr., who was born in 1974.

Paramount Television tried to compensate for its losses by selling the series cheaply to as many small television stations as possible. During this time, Star Trek got a huge boost in popularity, was broadcast worldwide and achieved cult status. This prompted Paramount to produce an animated series in 1973, and in 1975 the planning of a new edition of the series under the working title Star Trek: Phase Two . When this project failed, a movie was started. The movie Star Trek: The Motion Picture from 1979 was successful enough that further movies followed and finally in 1987 a new series Star Trek: The Next Generation , which was followed by further offshoot series after Roddenberry's death.

Roddenberry was a supporter of humanism . He died of heart failure on October 24, 1991. On April 21, 1997, a Pegasus XL rocket carried some of his ashes and that of 20 other people, including Timothy Leary , into orbit. This made Roddenberry one of the first to be buried in space . The capsule with the ashes burned up in the atmosphere in 2004.

The series Andromeda and Mission Earth - You Are Among Us were created by his widow Majel Barrett from his estate. 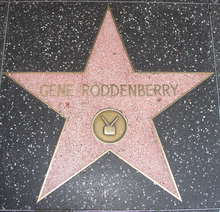 Roddenberry's star on the Hollywood Walk of Fame

Roddenberry became the first television writer and producer to earn a star on the Hollywood Walk of Fame in 1985 . One of the Paramount Studios production and administration buildings on Melrose Boulevard is the Gene Roddenberry Building.

In recognition of Gene Roddenberry's life's work , the International Astronomical Union ( IAU ) decided in 1994 to name a crater on Mars after him. It lies at −49.9 ° latitude and 4.5 ° longitude of areographic (Martianic, i.e. relating to Mars) coordinates and has a diameter of 140 km. The asteroid (4659) Roddenberry also bears his name.

On October 4, 2002, in the presence of his son Eugene W. Roddenberry, the El Paso Independent School District Planetarium was renamed Roddenberry Planetarium . In the same year he was posthumously - as well as his wife Majel Barrett Roddenberry, who has since died - the Douglas S. Morrow Outreach Award from the Space Foundation for services to the public perception of space programs.

The Seattle Science Fiction Museum inducted Gene Roddenberry into the Science Fiction and Fantasy Hall of Fame on June 16, 2007, along with director Ridley Scott , artist Ed Emshwiller, and writer Gene Wolfe . The award ceremony was hosted by actor and writer Wil Wheaton .