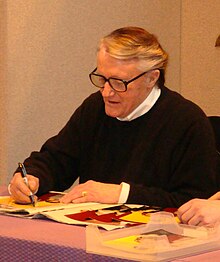 The son of an actor couple initially aspired to a career as a journalist , but came into intensive contact with theater and radio in college and decided to become an actor. He was discovered for the film during a theater appearance in Los Angeles in the early 1950s and received his first studio contract .

In 1959, he received his first Oscar nomination for best supporting actor for his role in The Man from Philadelphia . He played one of the magnificent seven in the western classic of the same name. Vaughn had his final international breakthrough as an actor in the role of the secret agent Napoleon Solo , whom he impersonated between 1964 and 1968 in the TV series Solo for ONCEL as well as some TV specials and movies (Thunderball) . The parodic adventures of the James Bond- based agent who - unusual for the 1960s - regularly saves the world with his Russian partner Illya Kuryakin ( David McCallum ), have been sold to numerous countries. When Vaughn took over the role of General Hunt Stockwell in the fifth season of the television series The A-Team in 1986 , who gave the A-Team the orders, Napoleon Solo received a late reception: In one episode, David McCallum made a guest appearance as a former Stockwell's Russian partner, who, however, served as a double agent here for twenty years. Despite the different names, the constellation, background music and even the change of scene unmistakably point to Solo for ONCEL .

Vaughn starred in many successful films, including alongside Steve McQueen in Bullitt , as a German major in Die Brücke von Remagen , also alongside Steve McQueen and Paul Newman in the disaster film Flammendes Inferno and alongside Christopher Reeve in Superman III - The steel lightning . He also played Harry Rule in the English crime series No Pardon for Guardian Angels from 1971 and from 2004 to 2012 the gentleman crook Albert Stroller in the series Hustle - Dishonest Lasts Longest . Up until 2016 he was seen in more than 220 film and television productions.

Vaughn , who holds a PhD in communication science, was also politically active. The staunch Democrat and friend of Robert F. Kennedy published his dissertation (Only Victims) in 1972 on the McCarthy era and its effects in show business.

In 1974 Vaughn married his colleague Linda Staab. He previously lived with actress Kathy Ceaton, whose son Matthew bears his name and grew up believing that Vaughn was his biological father.

Vaughn died in a Danbury, Connecticut hospice on November 11, 2016, eleven days before his 84th birthday, after years of treatment of leukemia.