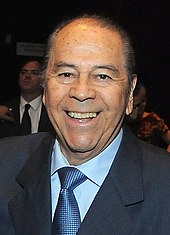 Gatica had his first appearances as a singer in the Teatro Apolo in his hometown as a duo partner of his older brother Arturo Gatica , who also made it possible for him to make his first recordings with Odeon . He became known with boleros such as Contigo en la distancia , En Nosotros and Sinceridad . He then had international successes in Latin America, Portugal and Spain with titles such as El Reloj , La Barca , Novia Mia and No Me Platiques .

Gatica began his first international tour in 1954 with the orchestra of Roberto Inglés in Buenos Aires. It took him via Uruguay and Brazil to London, where he appeared on the BBC and made recordings on Parlaphone , including the famous Bésame mucho . In the mid-1950s he performed for weeks in Havana in the crowded Blanquita Theater , Cuba's second largest concert hall, and in the Tropicana Night Club , and made his television debut.

In 1956 he went to Mexico to make further recordings, where he appeared in four films. In 1959 he was greeted by 5,000 fans at Madrid airport. Members of the royal family as well as politicians and film stars came to his appearances. His friendship with Ava Gardner also dated from this time . This was followed by appearances at the Casino Estoril in Portugal.

By the early 1960s, Gatica had already sold 22 million records worldwide. After a concert at the Araneta Coliseum in Manila in front of 160,000 spectators in 1964, a performance in New York's Carnegie Hall with a symphony orchestra under the direction of Lalo Schifrin followed . He then appeared with Nat King Cole at the Hollywood Bowl , recorded English-language titles with Nelson Riddle and his orchestra for Capitol Records and was a guest on the television shows of Dinah Shore , Perry Como and Patti Page .

Numerous other recordings and concert tours (including to the Middle East and Japan) followed in the 1960s, 1970s and 1980s. The double album Bolero is ... Lucho Gatica , which EMI Spain produced in 1991, was sold 400,000 times in two weeks. In 1993 BMG released the album 40 Years Singing About Love . Gatica appeared on a two-hour HBO broadcast in his honor in 1996 with Julio Iglesias , Celia Cruz , Luis Miguel and Juan Gabriel .

In addition to several gold and platinum records Gatica received the Congress of Ecuador, among others, the medal Santa Cruz de Triana O'Higgins of the Chilean state and 1992, the Gaviota de Oro at the Festival de Viña del Mar . In 2007 the Chilean President Michelle Bachelet presented him with the gold medal of the Chilean Composers' Association. In 2008 he was awarded a Latin Grammy for Lifetime Achievement in Las Vegas and received a star on the Hollywood Walk of Fame .