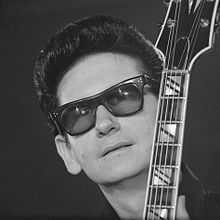 Roy Kelton Orbison (born April 23, 1936 in Vernon , Texas , †  December 6, 1988 in Hendersonville , Tennessee ) was an American pop, country and rock singer and songwriter . In the 1960s he had numerous hits with songs like Oh, Pretty Woman , Only the Lonely , Crying and In Dreams . His trademarks were sunglasses and gloomy love ballads. In the years before his death, Orbison made another highly regarded comeback. Rolling Stone magazine voted him 37th greatest musician and 13th greatest singer of all time .

Orbison was the son of the nurse Nadine Vesta Shults (July 25, 1913 - May 28, 1992) and the auto mechanic Orbie Lee Orbison (1913–1984). Roy Orbison got his first guitar at the age of six. His father Orbie taught him to play. In 1942 the family moved to Fort Worth because Orbison's father had got a job in an ammunition factory there. With his older brother Grady, the young Orbison returned to his hometown in 1944, where his grandmother still lived. There he also wrote his first song A Vow of Love . In 1945 he won a talent competition on the local radio station KVWC and received a weekly Saturday evening broadcast.

Around 1953 he had his first public appearance in front of an audience with his band "The Wink Westerners". He played at a school event of the "Wink High School". In 1954 he graduated from high school and moved to North Texas State College to study geology. While he only played country music on his first appearances , he has now also included rockabilly and rock 'n' roll pieces in his program.

Beginnings as a rockabilly 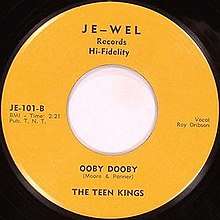 In 1955 Orbison traveled with his band to Dallas to audition the title Ooby Dooby , written by his two fellow students Wade and Dick , for Columbia Records . Columbia liked the title, but had Sid King and the Five Strings record the title. After Orbison and his band appeared on several radio shows, they renamed themselves "The Teen Kings". In addition to Orbison (vocals / guitar), they consisted of James Morrow (mandolin), Jack Kennelly (bass / fiddle) and Billy Pat Ellis (drums). With financial help, they managed to release the title recorded on March 4, 1956 in the recording studio of Norman Petty together with Trying to Get to You on Weldon Rogers ' record label Je-Wel Records on March 19, 1956. The contract was canceled shortly after the single was released because Orbison was still a minor and his parents' signature would have been required. However, Sam Phillips , owner of Sun Records , heard the record and offered Orbison a recording deal, which Orbison signed. On March 27, 1956, Roy Orbison created a remake of Ooby Dooby in the Sun Records recording studio , which was released on May 1, 1956 with Go Go Go on Sun # 242 and then sold 350,000 times.

The title only came to number 59 on the national charts. In order to build on the success, Orbison undertook a tour with Johnny Cash , Carl Perkins , Warren Smith , Sonny Burgess and Faron Young , during which they came to Canada . In September of that year they recorded their second single, You're My Baby , a piece written by Johnny Cash, and the title Rockhouse , which was by Orbison and Harold Jenkins, better known as Conway Twitty . Orbison's success with Sun Records was very limited because he could not agree with the label boss Phillips about the song material to be used or the style of his music. Orbison was under contract with Sun until 1958, after which he moved to RCA Records , where Elvis Presley was also under contract. He released two singles. When these were unsuccessful, the contract was not extended.

In the meantime, Roy Orbison had written a song for his wife Claudette that he sang for the Everly Brothers during a break in performance. The brothers liked the song and they took Claudette in. The song appeared on the B-side of the hit single All I Have to Do Is Dream and secured Orbison some royalties. Jerry Lee Lewis also recorded Orbison's Down the Line in 1958 , the song was released on the B-side of his hit Breathless . It almost seemed as if Orbison had to eke out his life as a songwriter when he finally signed with Fred Foster in 1959 on the independent label Monument Records . He recognized the young singer's potential, and the second single, Uptown , hit the charts, albeit only up to number 72.

Roy Orbison - Only the Lonely (Know the Way I Feel)

Orbison achieved his national and international breakthrough at Monument Records on May 9, 1960 with Only the Lonely (Know the Way I Feel) . With rock, pop and country titles he reached top positions in the charts. Orbison had become an international star. The songs from this period excellently show his tenor and falsetto , which he knew how to combine into a certain drama. A special characteristic of his singing was the rolling of an R for about one bar, comparable to the growling of a dog, which he placed in prominent places in some songs. His singles were released not only in the US, but also in Germany, France and the UK. He wrote most of his hits alone or with his co-writers Bill Dees and Joe Melson .

In 1962 Roy Orbison performed for the first time in Great Britain, in 1963 he toured there with the Beatles and Gerry & the Pacemakers . On the plane, the farsighted Orbison forgot his glasses and had to appear in the evening with his sunglasses (also fitted with glasses of suitable strength). The pictures of the tour went around the world, and from now on Orbison only appeared with the dark glasses. Without glasses you can only see him later in a few photos and in the film The Fastest Guitar .

In 1963 Orbison recorded two songs in German with Ralph Siegel in Hamburg , Mama and San Fernando , the songs did not reach the hit parades. In 1965 he toured a. a. with the Rolling Stones through Australia. Mick Jagger and Keith Richards inspired Pretty Woman's guitar intro to compose a similar intro for their hit (I Can't Get No) Satisfaction .

The German pop singer Roy Black took the first name of his role model Roy for his stage name around this time, later Black recorded German versions of Orbison's Only the Lonely and California Blue . The touring band of the early 1960s also included Bobby Goldsboro , who had his own hits from 1963 and successfully started a solo career.

After the successful singles Only the Lonely , Running Scared , Crying , In Dreams , Blue Bayou and his biggest hit Pretty Woman , which came out in 1964, Orbison was hit by private strokes of fate. His first wife Claudette died in a motorcycle accident in 1966. Two of his three sons from this marriage, Roy jr. (* 1958) and Anthony (* 1962) died on September 14, 1968 in a fire in his country house. The third son Wesley (* 1965) was saved at the last second by Orbison's parents.

The single Pretty Woman was Orbison's last global hit for a long time and also the last big hit on the Monument Records record label. A million dollar contract lured him to the major label MGM in 1965 , which guaranteed him a feature film ( The Fastest Guitar ) and various television appearances. The sound quality and the quality of the music production of the Monument recordings was seldom achieved at MGM, moreover, he was contractually obliged to produce a certain number of songs, which caused their quality to suffer. Although Roy Orbison continued to write good songs, the great successes failed to materialize.

Another reason for the lack of commercial success from the mid-1960s onwards was the dominance of the beat groups in the international hit parades.

In 1973 the contract with MGM ended, he subsequently signed with Mercury Records and released three singles and the album I'm Still in Love with You . There was no success here either, in 1976 he was back under contract with Monument for a short time, the result was the album Regeneration .

In the meantime, Linda Ronstadt recorded a cover version of Orbison's Blue Bayou and came in 1977 at number 3 on the US charts. The Ronstadt record company then took on the unsuccessful disco album Laminar Flow with Roy Orbison . Successful cover versions were subsequently released by Paola Felix in 1978 with Blue Bayou (in German), Don McLean in 1980 with Crying and Van Halen in 1982 with Oh, Pretty Woman .

Orbison was in the audience at a concert by Elvis Presley in late 1976. Presley introduced him to the other audience as "... the greatest singer in the world". In 1978 Orbison recorded the score for A Living Legend , a film about the life of Elvis Presley. The film only ran for a short time in a few cinemas in the United States.

In 1980 Orbison achieved a country hit in a duet with Emmylou Harris with That Lovin 'You Feeling Again , and the performers received a Grammy for the best duet .

Also in 1980 Orbison made his only appearance in what was then the Eastern Bloc in Bulgaria . During this live performance, which was broadcast on Bulgarian television, he was accompanied by a full orchestra. 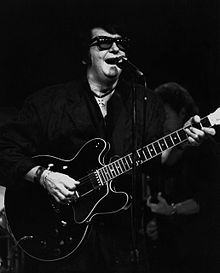 In 1985, his wife Barbara was now his manager, a remake of the 1963 hit In Dreams in David Lynch's film Blue Velvet became popular, in the same year Orbison, Johnny Cash, Jerry Lee Lewis and Carl Perkins met at the Sun Studios in Memphis to record the album Class of '55 together. 1987 Orbison re- recorded his old hits on Virgin Records , as these had not been available to his fans after the bankruptcy of Monument Records in the early 1980s. That year he joined a. starred with Elvis Costello , Bruce Springsteen and James Burton in the television special Roy Orbison and Friends , which resulted in the live video Black and White Night . Also in 1987 Orbison was inducted into the " Rock and Roll Hall of Fame ", the laudatory speech was given by Bruce Springsteen.

At the end of 1988 he celebrated a comeback with the single You Got It and the album Mystery Girl , and he teamed up with Bob Dylan , George Harrison , Jeff Lynne and Tom Petty to form the traveling Wilburys supergroup , whose album Traveling Wilburys Vol. 1 grew a million times over sold.

Roy Orbison never lived to see this success. He suffered from heart problems at a young age and had to undergo bypass surgery in the late 1970s . He died of a heart attack on December 6, 1988 , before the album was released. The funeral took place in the Westwood Village Memorial Park Cemetery in Los Angeles , California .

In the following years, Orbison Records regularly released compilations and reproduced albums. In 1992 the album King of Hearts was released posthumously , which was compiled from demos and already finished master tracks under the direction of Barbara Orbison . a. T-Bone Burnett , Jeff Lynne , Don Was, and Robbie Robertson produced. In 1990 he received a posthumous Grammy for Pretty Woman . In 2004 Orbison's Blue Bayou was used as the score for the feature film Dreamcatcher . Surprisingly emerged in 2015 with Orbison's sons a 1,969 recorded, complete and lost Believed album that could be saved digitally with much effort and in December 2015 under the name One of the Lonely Ones appeared. Orbison got into an argument with MGM in 1969 because they did not release the album and for a while withheld payments from Orbison's record sales.

More than 20 years after his death, Roy Orbison was posthumously honored with a star on the Hollywood Walk of Fame in January 2010 .