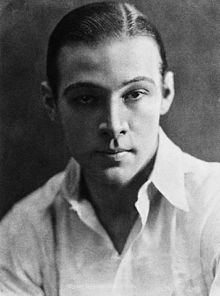 Rudolph Valentino (born May 6, 1895 in Castellaneta , Italy , † August 23, 1926 in New York City , New York ) was an Italian actor . He achieved world fame in 1921 with the film The Sheikh and became one of the most popular actors of the silent film era . Valentino cemented his reputation with films such as The Eagle and The Son of the Sheikh , in which he portrayed southern lovers. He died when he was only 31 years old from a perforated gastric ulcer . His death and funeral sparked mass hysteria in the United States among his numerous female fans.

Rudolph Valentino as a child

Rudolph Valentino was born on May 6, 1895 as Rodolfo Alfonso Raffaello Piero Filiberto Guglielmi di Valentina d'Antonguolla in Castellaneta as the son of the military veterinarian Giovanni Guglielmi (1853-1906) and his wife Marie Berthe Gabrielle Bardin (born May 7, 1856 in Lure , France ; † January 18, 1918) born. His father died of malaria when Valentino was eleven years old. He had three siblings, Alberto (1892–1981), Beatrice, who, however, died in childhood, and Maria.

Valentino was expelled several times during his school days for disrespectful behavior and truancy and only with difficulty managed to obtain a diploma in agriculture .

Valentino wanted to join the Navy but was refused. He traveled to Paris in 1912 , spent all his money there and had to ask his mother to send him financial support for the return trip. His uncles decided that he should go to the United States and learn to live independently and as a man.

Rudolph Valentino came to the United States in 1913 and initially worked as a gardener, waiter and car washer. He then performed as a dancer in New York and got to know high society. Valentino had to go to prison for a short time because of minor offenses - theft and extortion. In order to break away from his past and because the Americans would have had problems pronouncing Guglielmi , he changed his name to Rudolph Valentino .

Valentino then gave a short guest appearance with an operetta troupe and moved to San Francisco . He shot his first silent films here , My Official Wife (1914) and Alimony (1917).

In 1919, Valentino was discovered in the film The Eyes of Youth by screenwriter June Mathis , who convinced director Rex Ingram to let Valentino play the male lead in The Four Horsemen of the Apocalypse . The film became a huge hit and Valentino became a Silent Screen Super Star overnight . In addition to a business relationship between Valentino and Mathis, a close friendship also developed. Valentino said about the producer:

"She discovered me, anything I have accomplished I owe to her, to her judgment, to her advice and to her unfailing patience and confidence in me."

“She discovered me; I owe everything that I have achieved to her, her judgment, her advice and her constant patience and trust in me. "

The good relationships that Valentino had with Mathis were put to the test some time later after the film star had sent back a script submitted by Mathis for the unrealized project The Hooded Falcon with a request for improvement. After it turned out that the project should be discontinued because of Valentino's difficulties with his wife Natacha Rambova , Mathis completely broke off contact with Valentino. It was only shortly before the film star's death that the two reconciled. Mathis even provided her grave for Valentino.

Another great success besides The Four Horsemen of the Apocalypse was Der Scheich in 1921 (continued in 1926 with The Son of the Sheik ). Valentino's fame was mainly based on his role as a Latin lover , which made the hearts of women and men fly to him.

Strike and dance tour for Mineralava

In 1922 Valentino started a strike against Famous Players Lasky, where he was under contract. He justified the strike with allegedly too bad pay and with the fact that he had little artistic control over his films. The latter was mainly persuaded by his future wife Natacha Rambova, whom Valentino had just met. Famous Players Lasky was not deterred by Valentino, but increased his weekly earnings from $ 1,250 to $ 7,000. New contractual provisions were negotiated, including that Valentino was not allowed to work for any other film studio. Valentino, who owed about $ 80,000 at the time, accepted the offer.

However, there were no new film offers from Famous Players Lasky. Valentino performed with Natacha Rambova as a dancer for the beauty product company Mineralava in 88 cities in the United States and Canada through 1923 and published a book of poetry called DayDreams .

After the contract with Famous Players Lasky expired, Valentino switched to United Artists . He had previously tried unsuccessfully to independently produce a film with Natacha Rambova. The Hooded Falcon project was never realized due to the growing estrangement between Rambova and Valentino.

The more successful he became on the big screen, the worse things went for Valentino privately. His marriage to the lesbian actress Jean Acker in 1919 was purely a PR matter, and Acker locked him out of the hotel room on his wedding night. The marriage was divorced in 1923. Shortly afterwards, Valentino married Natacha Rambova , whom he had met while filming one of his films. However, since he had not waited a full year between his divorce and a new wedding - as required by California law - he was jailed for three days for bigamy and fined $ 10,000.

Valentino's second marriage was no less unhappy than his first. Natacha Rambova refused to move into his home - Falcon Lair in the mountains above Los Angeles . She even said that Valentino was " getting on her nerves" and that she needed a certain amount of time without him ( marital vacation ). In 1924, Valentino tried to kill himself with a revolver. The Spanish artist Federico Armando Beltran Masses, who was good friends with Valentino, was able to dissuade the film star from his plan. In addition, Rambova revealed more and more of her domineering character when she began to negotiate Valentino's contract terms and control him while filming. In 1926 Valentino's second marriage also ended in divorce. Shortly thereafter, he began an affair with Pola Negri .

Valentino was fluent in several languages: English , French ( mother tongue ), Italian (mother tongue) and Spanish . He felt a certain connection to the German language , as the numerous German books in his library in Falcon Lair , which were later auctioned off, explain, but he was unable to speak them fluently. In order to better empathize with his role in the film The Eagle (1925), Valentino spoke only Italian during the filming. He was not prepared to use any other language on the set, although no one else understood Italian except himself.

Valentino, the visual counterpart to Douglas Fairbanks Sr. , was like him one of the first male sex symbols in the film. He was best known as the Great Lover , Latin Lover or Sheik (Sheikh). Valentino, however, was repeatedly exposed to mainly male hostility, which culminated in the fact that he was denigrated by a journalist from the Chicago Tribune as a " pink powder puff " (orig. Pink powder puff ). Valentino challenged the author of the article to a boxing match, which never happened. The accusation of effeminizing and feminizing the American man (effeminization of the All-American man) , as it was repeatedly published, especially by the Chicago Tribune , gnawed Valentino's self-confidence. In the course of his career he had therefore tried to break away from the roles of the attractive lover and make more "serious" films. He was not very successful with this, however, as the United Artists did not want to give up one of their most commercially successful "sex symbols". Despite his aversion to the image of the sheikh , Valentino agreed to shoot the sequel to the film from February 1926 - not least to pay off his horrific debts (Valentino earned $ 200,000 from the film and 25% of the Profits). He had bought the costumes on a trip to France. The film, Valentino's last, premiered on July 8, 1926.

1926 was a busy year for Valentino. The difficult divorce from Natacha Rambova, the advertising appearances for The Sheik's Son , the hostility of the press, nightly long parties and the oppressive heat put his body on more and more. On August 15, Valentino collapsed in his hotel room at the Ambassador Hotel . He was immediately admitted to the hospital, the Stuyvesant Polyclinic , where appendicitis was initially suspected. A perforated gastric ulcer was later found to be the cause. This constellation of findings - perforated gastric or small intestinal ulcer, which in terms of clinical symptoms resembles acute appendicitis, was later named Valentino's syndrome in the specialist medical literature . Well-being wishes from all over the world reached the star. More and more fans gathered in front of the hospital. An operation and massive morphine infusions made Valentino's poor health worse. Valentino spent his last days in a comatose state, emaciated and twitching in pain.

The 31-year-old Rudolph Valentino died on August 23, 1926 at 12:10 p.m. A few days later a memorial song There's a New Star in Heaven To-Night , sung by Vernon Dalhart , was published, an (instrumental) version of which was also available in Germany. Brunswick brought out a record made by Valentino in 1923 with the songs Kashmiri Song and José Padilla's “El relicario” (The Talisman) as a memorial plate. An announcer drew attention to their history before the performances.

Valentino was about $ 100,000 in debt at the time of his death. For his funeral, numerous pieces from his Falcon Lair estate and the house itself had to be auctioned. The funeral in New York, which was attended by 100,000 people, was a staging. In the open coffin was not Valentino, but a wax copy. Pola Negri, who followed the coffin like a widow, explained that she and Valentino were about to get married. Dozens of people were injured during jostling and window panes were broken. Only in the evening did the police regain control of the situation.

June Mathis, who had cultivated both a business and a personal friendship with Valentino, made her grave available as a temporary solution after the actor's completely unexpected death. When she died herself in 1927, the remains of Valentino were reburied one grave further and have since rested next to Mathis in Hollywood Forever Cemetery (grave site no. 1205). Valentino's grave is by far the most visited in the celebrity cemetery.

For decades, a figure in black kept the gossip press that brought Valentino flowers on the day of his death. It was only after almost three decades that it turned out to be a publicity stunt. The Lady in Black was one of the sources of inspiration for the song Long Black Veil .

After the death of their idol, Valentino's fans developed numerous conspiracy theories to explain the star's untimely death and to be able to hope for a return at some point. It was claimed that Valentino only faked his death to take a break from his stressful professional life for a while. Some believed that he was shot or poisoned with aluminum by a jealous husband .

Valentino's family did not want to transfer his remains to Italy. After the inauguration of a museum for Valentino, the city of Castellaneta asked to bury its most famous son in the local cemetery. In 1976 Alberto Guglielmi - Valentino's older brother - wanted to shed light on the numerous conspiracy theories surrounding his world-famous brother once and for all, but died years later without having implemented this announcement.

Valentino's name was often misspelled, especially in the earlier films of his career. Examples for this are:

The US - series American Horror Story theme in the fifth season ( Hotel ) the mysterious death of Valentino. He is portrayed by Finn Wittrock as a vampire who faked his death in order to be able to live in peace forever after his career as a film star.