WC Fields born William Claude Dukenfield (born January 29, 1880 in Philadelphia , Pennsylvania , † December 25, 1946 in Pasadena , California ) was an American actor, comedian, screenwriter and juggler. He became known as an entertainer in vaudeville shows and on Broadway since the turn of the century , before he became the star of numerous film comedies from the 1920s. In his roles, Fields played mostly misanthropic and selfish family men with a penchant for alcohol. His characters mostly harbored a passionate hatred of their petty bourgeois life - nagging wives, annoying children, dogs, neighbors, the job - and that is precisely why the viewer liked them. He was one of America's most popular comedians all his life.

William Claude Dukenfield was born as the eldest of five children of the English immigrant James Dukenfield (1840-1913), his mother Kate Felton (1854-1925) was born like Fields in the US state of Pennsylvania. He came from a simple working-class family, attended school for only five years and left it to help his father with his moving vegetable stand. The relationship between Fields and his father was difficult, however, and he regularly ran away from home. At the age of thirteen he was already working independently in a clothing store and an oyster shop. Fields discovered his talent as a juggler early on , which also enabled him to enter show business. In 1898 he made his first appearances under the stage name WC Fields in vaudeville shows. He designed his own artist figure , the Eccentric Juggler . He quickly celebrated success and toured half the world with his shows. In the advertisements around 1900 he was often advertised as the "world's best juggler".

In the 1900s, Fields expanded his spectrum to include acting, including on Broadway . At the age of 33 he was on stage at the “Palace” in London and played together with Sarah Bernhardt in a special performance at Buckingham Palace . He was engaged at the Folies Bergère in Paris, where he played alongside a young Charlie Chaplin and Maurice Chevalier , among others . Fields was also an artist in the program of the famous Ziegfeld Follies on Broadway between 1915 and 1921 . For a year in 1923 Fields was also part of the cast of the then highly acclaimed Broadway musical Poppy , which made him a comedian star. In 1925, the director David Wark Griffith filmed the musical under the title Sally of the Sawdust , where Fields was also part of the cast. However, Fields had made his film debut ten years earlier: In the 15-minute short film Pool Sharks (1915) he was able to bring his excellent pool skills to bear.

Fields in his 1919 passport

After Fields moved near Burbank , California in the early 1930s , 37 films for the Paramount studio followed . He achieved his breakthrough as a film actor in 1933 with International House of A. Edward Sutherland . In the same year he played Humpty-Dumpty in the commercially unsuccessful Lewis Carroll film adaptation of Alice in Wonderland , in which numerous other film stars also appeared. On the other hand, the comedy This is a gift (1934), in which Fields plays a family man plagued by family and work who seeks his fortune with an orange plantation in California, was a great success . In 1934 four more Fields films were released, including You're Telling Me , in which his character - an unsuccessful inventor - unexpectedly receives help from a princess.

In his own comedies, Fields mostly embodied the part of the misanthropic , somewhat mumbling gentleman who is plagued by the perils of everyday life. Noteworthy are the unusual role names Fields wore in his comedies: Professor Eustance McGargle, Elmer Prettywillie, Augustus Q. Winterbottom, J. Effingham Bellweather, Rollo La Rue, Egbert Sousè (" accent grave over the e"), Harold Bissonette (" pronounced Bissonay ”), Ambrose Wolfinger, Larson E. Whipsnade, Cuthbert J. Twillie or T. Frothingill Bellows. The names were chosen by himself, but according to his statement, they were always read at the performance locations. Many supporting roles in his films also had such illustrious names, for example Countess Maggi Tubbs DePuizzi (referred to by Fields as "Countess DePussy") in Poppy (1936). Fields' canvas figure is constantly at odds with his often unlikable fellow human beings, his figure almost always thinks of himself. On the canvas Fields lived a passionate hatred of - among other things - children, families, dogs, business people and Christmas; on the other hand, his characters are usually only taken with a few things, such as beautiful women and, above all, alcohol consumption. Fields described his canvas figure in a magazine in 1937 as follows:

“You heard the old legend that the little exploited man gets the laughs; on the other hand, I'm the most combative guy on screen. I want to kill everyone. But at the same time, I'm also scared of everyone, so I'm just a big, fat, scared tyrant. I was the first comedian in history, as they told me, to argue and fight with children. I kicked Baby LeRoy [a 1930s toddler actor] ... then, in another movie, I hit a little dog. But both times the sympathies were on my side. People don't know what the unruly baby might be doing, and they think the dog might bite me. "

In the elaborate Metro-Goldwyn-Mayer -Literaturverfilmung David Copperfield played Fields in 1935 the good-natured, but notoriously wasteful in money matters Mr. Micawber. He took over the role after a few days of shooting from the unsuccessful Charles Laughton . Despite instructions from director George Cukor , Fields consistently refused to give up his American accent for the British character. After the film was released, Fields received excellent reviews, the New York Times even saw Fields as a "spiritual descendant" of Mr. Micawber. According to research by film historians, David Copperfield was the only film in which he acted as the script dictated and did not improvise spontaneously in front of the camera. At MGM they wanted to cast him later for the title role in the classic film The Wizard of Oz (1939), Fields declined because he predicted the project would be a failure.

From 1936 onwards, Fields was plagued by health problems, and it wasn't until 1938 that he was able to return to the big screen with The Big Broadcast of 1938 . This was also his last film for Paramount. In his following films he was instead employed by Universal Pictures , his first film there was You Can't Cheat an Honest Man from 1939. Two of his greatest film successes celebrated in 1940 at Universal, on the one hand alongside Mae West in the frivolous comedy Mein kleine Gockel , on the other in the title role in The Bank Detective (1940), one of his most famous films today. During this time he also appeared on the radio with spontaneous dialogues on Edgar Bergen's Charlie McCarthy radio broadcasts . Fields was even more involved in the role of screenwriter at Universal than at Paramount, but many of his ideas were so eccentric that they were not accepted by the studio. In Never Give a Sucker an Even Break (1941) he secured almost complete artistic control over the film after long arguments with Universal. The finished result enraged Universal Pictures and was a comedy full of surreal comedy and critical nod to the Hollywood business. “Fields put all the tried and tested gags into the absurd plot. He cheats and is cheated, he hunts for liquor, money and success, and every now and then a boulder falls on his head. "

Never Give a Sucker an Even Break (1941) was Fields' last leading role in a film. After that he largely withdrew from show business, until his death he only took on guest roles in a few feature films and occasional appearances in radio shows.

Action behind the camera 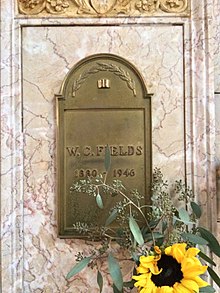 On August 8, 1900 Fields married the artist Harriet Hughes, his partner at the time at the juggler performances. In 1904 their son, William Claude Dukenfield Jr., was born. Hughes and Fields stayed married until his death in 1946, but had been separated since 1908. However, he remained in contact with his wife and provided substantial sums of money to support his family members. Fields also had an illegitimate son with his lover Bessie Poole, William Rexford Fields Morris (1917-2014). He met his last partner, Carlotta Monti (1907–1993), in 1933, and they stayed together until his death. Monti also took on minor roles in some of his films. He died of a gastric haemorrhage on Christmas Eve 1946 at the age of 66. Fields is buried in the Forest Lawn Memorial Park Cemetery in Glendale , California.

Alcohol played an integral role in Fields' films (it was rarely filmed without a “drink” in hand) and was known for numerous alcohol quotes such as “Always have a small bottle of whiskey with you in case you get a snake bite, too you should always have a little queue with you. ”However, none of his fellow actors could remember that he really got drunk once while working on the film. In private life, however, he had problems with alcoholism, especially in later years. His fear of theft and his distrust of bankers were also legendary: Fields stored small amounts totaling several 100,000 US dollars in countless banks across the United States and never left his house with large amounts of money.

The comedian was considered an atheist and was known for his liberal views. With his will he wanted to establish the WC Fields College for Orphan White Boys and Girls, where no religion of any sort is to be preached ("WC Fields College for white orphan boys and girls, where no religion should be preached") but not realized, as his wife Harriet successfully challenged the will after his death. The oft-made claim that he, like his misanthropic film characters, hated children in real life is now viewed as false by biographers.

In 1976 part of Fields' life, starring Rod Steiger, was filmed under the title of the bestselling biography of actress Carlotta Monti: WC Fields and Me . Monti had been by Field's side as another mistress for the past 14 years. The film script, however, was of a reviewer of the New York Times panned . Lead actor Rod Steiger did not do justice to the misanthropic comedian and performed all his text in a monotonous singsong by a third-rate nightclub comedian. The film music was written by one of the most famous American composers, Henry Mancini .

On the occasion of his 100th birthday, a 37 ¢ commemorative stamp was issued for him on January 29, 1980 in the "Performing Arts and Artists" series. He also received a star on the Hollywood Walk of Fame at the address 7000 Hollywood Blvd .