Jennifer Garner grew up as the second of three sisters in Charleston, West Virginia . With a lot of enthusiasm for stage work, she took ballet lessons for years . As she herself admitted, she was not very talented for it.

After graduating from high school , she attended Denison University in Ohio from 1990 , initially majoring in chemistry . Later she switched to the theater , because the stage was alluring again. After graduating from university in 1994, she moved to New York , where she worked as a theater assistant. A little later she got her first small roles on television, for example in the series Significant Others .

Eventually Garner moved to Los Angeles , where she made a living as a table attendant in a restaurant and gradually got other television roles. In 2000 she married fellow actor and film producer Scott Foley , and in 2003 she divorced him. After that, she had a brief relationship with fellow actor Michael Vartan .

2001 Garner got her first leading role in the hit action series Alias ​​- The Agent of JJ Abrams . For the role of Sydney Bristow , she received a Golden Globe in the category Best Actress in a Drama Series . Her first attempt to make a career in leading roles on the screen was quite successful in 2004 with the comedy 30 Overnight . With Elektra , she took on a supporting role from the comic book version Daredevil again in 2004 as the title character . The flick was moderately successful in US cinemas. In 2013 she played a supporting role alongside Matthew McConaughey in Jean-Marc Vallée's film Dallas Buyers Club .

From 2004 Garner was in a relationship with her fellow actor Ben Affleck . They were married in the Caribbean on June 29, 2005 , and their first daughter was born on December 1, 2005. The second daughter was born on January 6, 2009, and their first son followed on February 27, 2012. Garner has taken her husband's last name and is now called Jennifer Affleck. But she kept the name Garner as a stage name.

On June 30, 2015, the day after their tenth wedding anniversary, Garner and Affleck announced that they were divorcing. 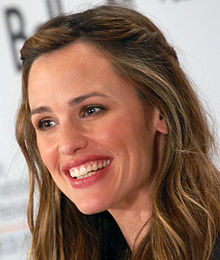