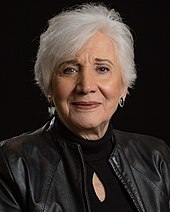 Olympia Dukakis was born in Lowell in 1931 as one of two children of the Greek couple Constantine and Alexandra Dukakis. She was a cousin of Michael Dukakis , former Massachusetts governor and Democratic presidential candidate in 1988.

Dukakis began her theater career after graduating from Boston University . In 1956 she was a co-founder of the Actors Company of Boston , which was founded by some students and performed in the newly opened Charles Playhouse in Boston from 1957 . In 1963 she received the Obie Award for her performance as Leocadia Begbick in the off-Broadway production of Brecht's comedy Mann ist Mann . She received a second Obie Award in 1985 for her role in The Marriage of Bette and Boo .

Since the mid-1970s she worked in Montclair , New Jersey as artistic director of the Whole Theater Company , which staged plays by Pirandello , Euripides , Eugene O'Neill , Samuel Beckett , Tennessee Williams , Edward Albee and Lanford Wilson , among others .

From the mid-1960s she also appeared in film productions. For her role as Rose Castorini in the romantic comedy Moonstruck , she won numerous awards in 1988, including the Oscar for Best Supporting Actress . Following on from this, she has since been cast several times as a woman of mature age with a strong character, often gifted with a dry sense of humor. So she was in three parts of the series Look who's talking! as well as films such as Magnolias made of steel , The naked cannon 33⅓ , Beloved Aphrodite , Mr. Holland's Opus or The booked man . In 1998, Dukakis took on the role of Charlotte Kiszko in the British television film A Life for a Life , the mother of Stefan Kiszko , who was wrongly convicted as a murderer in the Lesley Molseed case and imprisoned for 16 years. In 2019 she played the part of Anna Madrigal in the television series Stadtgeschichten .

In 2018, a documentary about her was made with Olympia .

Dukakis was married to actor Louis Zorich from 1962 until his death in 2018 . The couple lived in Montclair from 1970 to 1999 and then moved back to Manhattan . The marriage had three children.

Olympia Dukakis died after a prolonged illness in early May 2021, seven weeks before her 90th birthday at her home in New York City.

Received in the categories:

Nominated in the categories: