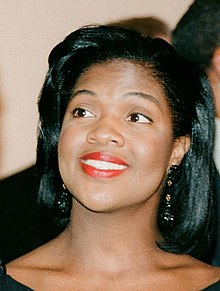 CeCe Winans comes from a large family of musicians. Four of her older brothers had already had great success in the gospel field as The Winans and in the mid-1980s she herself began in the music business in a duet with her brother Benjamin "BeBe" Winans and they had numerous successes by 1994, including two Grammys for best gospel singer, in 1988 for the title For Always and 1990 for Don't Cry , and one for the joint album Different Lifestyles (1991), which sold over a million times and reached # 1 on the R&B charts, as well as two singles from it.

In 1995 she followed up seamlessly with her first solo album Alone in His Presence . The album, which had meanwhile also sold over a million times, received the 1996 Grammy for best gospel album.

Since then, she has continued to publish successful solo albums and has received three more gold records , several Grammys and a number of other awards. In 2011 she and BeBe Winans got a star on the Hollywood Walk of Fame .