Benchmarking ( English. Benchmark = "measure", stands for a reference or benchmark) describes a management method in business administration with which the best possible reference for performance optimization can be found through targeted comparisons among several companies. To do this, it is necessary to identify better methods and practices ( best practices ) by comparing them , to understand them, to adapt them to one's own situation and to integrate them. Benchmarking is a further development of the company comparison .

The implementation of a benchmarking is based on the orientation towards the best of a comparable group. This approach is known as “best practice” (literally: best practice or “the best solution”). Best practice exists on different levels and occurs in the following forms:

At the top level, concepts are called into question. It's about "doing the right things". At the lowest level of consideration of the detailed processes, the process is questioned. The point here is to “do things right” - that is, to improve process efficiency.

A common mistake in benchmarking is not clearly defining the levels of consideration in advance. Experience shows that benchmarking at the concept level can hardly be combined with one at the detailed process level. The contact persons required for benchmarking for the two levels are all too different and the methods for identifying suitable benchmarking partners differ depending on the level under consideration.

Benchmarking is one of the most effective ways to quickly bring external knowledge into your own company. The knowledge gained in a benchmarking project is highly practice-oriented - because it comes from practice and has proven itself in everyday life.

In the European Union , benchmarking has been used since the end of 1996 as a method to compare the performance of the individual labor markets of the EU countries. The aim is to reveal the weaknesses of individual member states and enable the respective governments to carry out urgently needed reforms. Corresponding comparison methods have so far been rather uncommon at the national level of politics, the urge of national or regional politics for more transparency can be increased.

In the Federal Republic of Germany there are statutory regulations for benchmarking (e.g. hospitals, pension insurance) in the area of ​​public administrations and organizations on the one hand, and voluntary activities in so-called benchmarking clubs on the other. For example, the statutory accident insurance institutions are to carry out and further develop process benchmarking with scientific support , which takes into account both qualitative and quantitative goals and effects.

So far there are no examples of internationally standardized (ISO) benchmarks; industrial standards are set by SPEC , for example .

From a practical point of view, a division of benchmarking into four basic types has proven successful. The classification is based on the characteristics of the benchmarking partner. These can be found in your own or in a foreign branch and they either belong to your own or to another organization.

Internal benchmarking takes place within your own organization and industry. One example is an international cement manufacturer who periodically compares the production process in all of its plants.

The great advantage of this type of benchmarking is, firstly, that the data is easily available and, secondly, comparisons are possible at the key figure level. A possible disadvantage can be a lack of acceptance, which can be traced back to the phenomenon that “the prophet in his own country” often does not count.

Competitive benchmarking requires particularly good preparation and very open communication. Each participant must be assured that the information given and received is in a balanced relationship. This can hardly be realized as soon as one of the competitors takes the lead and looks for partners for "his" project.

The advantage of this type of benchmarking is the clear positioning of your own company in the competition. On the other hand, there are two disadvantages: Firstly, it is difficult to benchmark key figures or even processes with the direct competition. Second, the experience of the Transfer Center for Technology Management (TECTEM) at the University of St. Gallen shows that the findings from competitive benchmarking are not very new .

Here the comparison is made with companies in the same industry in separate markets. You compare the organizational area in terms of its function, such as the internal logistics department with a shipping company. It's the universal way of benchmarking. It offers a very high learning potential because it offers most of the new ideas and suggestions. This potential can be fully exploited, especially with benchmarking at the concept level.

Generic benchmarking is the purest form of benchmarking. A cross-industry and cross-functional comparison of processes and methods takes place here. A comparison between unrelated companies is sought here.

A frequently cited example of generic benchmarking is the comparison of the times for loading and unloading, refueling, cleaning and safety checks of aircraft with the pit stops at the Indy 500 car race conducted by Southwest Air Lines . The benchmarking is said to have made it possible to reduce the time by 50%. 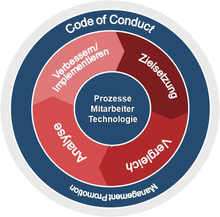 Standard processes of a benchmarking project

The basic flow of a benchmarking project, first described by Robert Camp, forms the basis of most publications on benchmarking. It can be roughly divided into the following phases

These steps can in turn become the starting point for a new benchmarking, which enters the comparison phase again.

Origins of the term "benchmarking"

For the etymology of the word “benchmarking” see benchmark .

The business term "benchmarking" goes back to the US company Xerox Corporation . Although the methods used in benchmarking arose much earlier in the practice of modern industrial production - for example, Henry Ford's transfer of the assembly line principle from a large slaughterhouse to automobile production by Henry Ford can be described as very successful benchmarking - the term benchmarking has become established not until the 1980s with the publications of Robert C. Camp on benchmarking projects at Xerox. These fonts gave the benchmarking idea its breakthrough.

The copier manufacturer Xerox found itself in a difficult competitive position at the end of the 1970s due to quality and cost problems . The Japanese competitor Canon brought a copier onto the market at a selling price that was significantly below the manufacturing costs for comparable devices at Xerox. Xerox's market share fell sharply in the copier market. For this reason, Xerox used benchmarking for the first time in 1979: a copier from a competitor was bought, dismantled and the individual components compared with those of their own copiers. This could largely explain Canon's lower manufacturing costs .

In a next step, the activities of the individual value chains in the company were analyzed, with the result that considerable problems in the logistics and sales processes could be uncovered. Among other things, the logistical processes of material removal at the copier manufacturer were compared with that of the outdoor article sender LLBean. This prompted Xerox to undertake follow-up projects, with pharmaceutical wholesalers and household appliance manufacturers serving as benchmarks. With these early successes, benchmarking soon became a mainstay of the Xerox strategy.

In 1992 the first founding of an IBC ( international benchmarking clearing house ) took place, a facility that offers as a service to mediate benchmarking partners. In 1994 the Fraunhofer Institute for Production Systems and Design Technology (IPK) founded the Benchmarking Information Center (IZB). The Global Benchmarking Network (GBN) was launched in 1994.

The focus for Camp was on the identification and implementation of "best practices". A purely quantitative benchmarking, i.e. the mere comparison of key figures, was only beneficial in connection with an in-depth analysis of the practices. Since then, benchmarking has evolved over several generations and has resulted in different manifestations.

The term “ best practices”, which is often used in benchmarking, is only correct if a benchmarking includes a complete, global analysis. This is only practicable in very few cases. An example would be the manufacturing process of microchips for highly integrated processors. All “global players” are known here and could be included in benchmarking.

As a rule, however, a global analysis is hardly possible or useful due to time and cost reasons. In most cases, the aim of benchmarking is not to find the best practices, but rather successful ones (whereby the criteria for proof of success must be defined in advance). The literature speaks of successful practices here .

Benchmarking is also used in economics. This is about the competitiveness of:

Benchmarking results may be a. published in the Global Competitiveness Report of the World Economic Forum .