Blue Moon is a pop song composed by Richard Rodgers (music) and Lorenz Hart (text) in 1933, which has developed into an evergreen and jazz standard across all styles and has become particularly popular in the Marcels version . It is the only title by the two authors that was not part of a musical .

The song shows an unusual development in the history of music, because for the melody composed in 1933 with rare chord changes, a total of four text variants were written by the original authors.

Rodgers and Hart had been under contract as film music composers for the film production of Metro-Goldwyn-Mayer since May 1933 , when they received the contract for the musical-comedy project "Hollywood Revue of 1933". They wrote a total of 12 titles for this in May 1933, three of which were incorporated into the script. They were Prayer (Oh Lord Make Me A Movie Star) (sung by Jean Harlow ; the precursor to Blue Moon ), I'm One of the Boys (Nina Mae McKinney) and Black Diamond ( Joan Crawford ). However, these songs were also not featured in the film, which was released in theaters on May 24, 1934 under the title Hollywood Party . In the script, the title Prayer is listed under number 225 for the film on June 14, 1933, the copyright of the authors was registered on July 10, 1933.

Thereafter, Prayer's melody for the MGM film Manhattan Melodrama was rewritten in March 1934 and was given the title It's Just That Kind of Play (Manhattan Melodrama) , sung by Shirley Ross , the copyright for which was registered on March 30, 1934 . However, the song was again not used in the film. Instead, MGM asked the two authors to write a nightclub title for the film. Lorenz Hart wrote the third textual version for the melody under the title Prayer (The Bad in Ev'ry Man) , which with singer Shirley Ross survived the final inspection and first appeared in cinemas on May 2, 1934.

Shortly after the film came out, MGM music publisher Jack Robbins of Robbins Music Publishing suggested to the writing team that the song be given more commercial, romantic text and catchy rhymes, and then promised to promote it from coast to coast. The result was the title Blue Moon , which was submitted for copyright in November 1934, the very next day . Copywriter Hart implemented the request almost sarcastically and reluctantly on the fourth attempt and now wrote a text that, in his opinion, had too little depth. In this modification, Blue Moon was placed on the Hollywood Hotel radio show , where it was used as the opening melody in 1934, played by the Raymond Paige Orchestra. A single version of this was recorded on April 5, 1934 under the title Once in a Blue Moon (Victor # 24604).

The title Blue Moon is derived from the phrase "blue moon", which dates back to 1528 and means something like "very rarely" or even "never". Today's idioms "until a blue moon" or "once in a blue moon" can be translated as "on Saint Never's Day ". This also expresses a two-time full moon in the same month in the English-speaking world , a rare phenomenon that occurs about every 2½ years. The song sings about the happiness of love, which the singer has previously considered quite unlikely (just "once in a blue moon"). At the same time, this is also used as a play on words, because the protagonist is sad ("blue") until he has finally found this love happiness.

On November 16, 1934, Glen Gray stood with his Casa Loma Orchestra and its singer Kenny Sargent in the recording studio and recorded the first commercially successful record of the song. It reached the first place on the charts , where it remained for three weeks. It was one of the first big hits of the record label Decca Records (# 312), which had just been founded in August 1934 . Shortly thereafter, a cover version by Ted Fiorito was created on November 19, 1934; it was followed by Frankie Trumbauer & Orchestra (November 20, 1934 with trumpeter Bunny Berigan ). Ray Noble was in the studio with Al Bowlly on January 12, 1935 and placed his version at number 5 on the charts. The version by Connee Boswell is often regarded as the original, but it was not written until January 15, 1935 and therefore much later than the real original. The Benny Goodman Orchestra made the next chart note with its recording on the same day (January 15, 1935) with the band vocalist Helen Ward , which advanced to second place.

Major cover versions come from Frank Sinatra , Mel Tormé and Billy Eckstine in particular . Frank Sinatra sang the title with the orchestra of Tommy Dorsey several times on the radio in November 1940 and presented it in April 1954, again on the radio, with the Sinatra Symphonette ; his only commercial studio recording of the piece was made with Nelson Riddle's orchestra on September 1, 1960 for the LP Sinatra's Swingin 'Session !!! recorded. Mel Tormé presented his version in the film about the life of the two composers Rodgers / Hart, Words And Music . The film produced by MGM was released in cinemas on December 31, 1948, the record for it was released in April 1949 and made it to number 20. Billy Eckstine with the Hugo Winterhalter orchestra came to number 21 in March 1949. Ivory Joe Hunter was ranked 21st in the studio on November 27, 1951, a jazz version by Oscar Peterson was made on December 7, 1953. 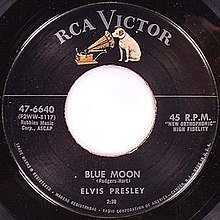 Elvis Presley was still under contract with Sun Records when he recorded Blue Moon on August 19, 1954 . On the day of the recording, Tomorrow Night and I'll Never Let You Go were made . The recording date is controversial because producer and label owner Sam Phillips made a mistake with the matrix lettering. Take 4 of this Sun session with the unusual Elvis interpretation was included on the RCA LP Elvis Presley in March 1956 , released as a single by RCA on September 8, 1956 (rank 55). Tony Bennett released his sentimental version of this on July 28, 1958.

Caterina Valente sang it on her album Caterina Valente in London from 1964. Bob Dylan published his interpretation of the song on the 1970 album Self Portrait . The Cowboy Junkies released their version Blue Moon revisited (Song for Elvis) in 1989 .

Götz Alsmann sang it in 2014 on his album Am Broadway in German under the title “Mondnacht am Meer”.

The doo-wop formation The Marcels recorded a total of four songs on February 15, 1961, one of which was discarded. Producer Stu Phillips then practiced the replacement song Blue Moon with the quintet within an hour , for which only ten minutes of recording time were available; this version was finished in just two takes. In February 1961 it was the group's first single on the market. The fast doo-wop version of the Marcels is hardly recognizable as Blue Moon , also because it copied the arrangement of Zoom Zoom Zoom by the doo-wop group Collegians and is provided with intense onomatopoeia . The record was played 26 times during a single program by radio DJ Murray the K on radio station WINS in New York, stayed in first place for three weeks in the US, for two weeks in the UK and sold over 2.5 million worldwide Copies. Richard Rodgers had criticized this version and warned in numerous newspaper advertisements against the purchase of the record; Even the music magazine Billboard did not miss the stuttering and hasty singing.

Ursel Jakob took advantage of the moderate success of the Marcels in Germany (rank 13) and released a German version in the same year without reaching the charts. Only Harry Glück brought his only hit up to 13th place on the German charts in June 1963. In November 1980 Showaddywaddy released a version for the UK market.

Of Blue Moon of exist ASCAP According over 120 versions. With 808 (Richard Rodgers) and 354 (Lorenz Hart) titles registered by copyright, both authors are among the most successful in American music. Blue Moon has appeared in numerous films, including Words and Music (1948), Malaya (premiered December 27, 1949), East Side West Side (December 22, 1949), With a Song in My Heart (April 4, 1952) and American Werewolf (1981).

Blue Moon is the anthem of the English football club Manchester City .