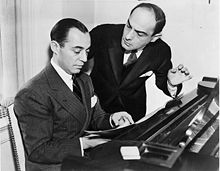 Lorenz "Larry" Milton Hart (born May 2, 1895 in Harlem , New York City , † November 22, 1943 in New York City) was the lyricist of the famous Broadway songwriting team Rodgers and Hart . Among his best known works are Blue Moon and My Funny Valentine .

Hart was born the son of German- Jewish immigrants in New York. He had a good relationship with his mother, but a strange relationship with his father. The father described himself as a businessman, but his son often said that he was a crook. These circumstances led to Lorenz Hart becoming a rather boisterous personality. He loved giving parties and had a penchant for living on a grand scale.

Hart attended the Columbia University Graduate School of Journalism , where a mutual friend introduced him to the composer Richard Rodgers in 1919 . The two subsequently wrote songs for a number of amateur and student productions. In the same year they were able to put their first song in a Broadway musical. It was Any Old Place With You in the musical A Lonely Romeo . The big break came in 1925 when they had great success with the Theater Guild production The Garrick Gaieties . They continued their work together until Hart's death in 1943 and could point to numerous successful shows.

Hart struggled a lot with his homosexuality , especially at a time when it was still very hostile, and with alcoholism , which ultimately also contributed to his death. His personal problems often led to arguments with Richard Rodgers, which resulted in a brief separation in 1943. Rodgers began working with Oscar Hammerstein , a school friend of Hart's, during this time . Rodgers and Hart got together one last time in the fall of 1943 for a resumption of A Connecticut Yankee . Five days after the premiere, Hart died of pneumonia . He was buried in Mount Zion Cemetery in Queens , New York.