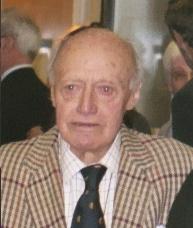 Jack Cardiff (born September 18, 1914 in Great Yarmouth , Norfolk , † April 22, 2009 in London ) was a British cameraman and film director . He is considered one of the most important cameramen in film history, especially because of his pioneering work in the application of the Technicolor process. As a director, he made one of the style-defining films of the British New Wave with Sons and Lovers (1960) .

Jack Cardiff was born into a family of actors. His parents were touring actors and Cardiff literally spent early childhood in the dressing rooms and on the stages of provincial English theaters. His parents also worked as extras in film and gave Jack his first film roles as a child actor. When he finished school, he went back to film, initially as a “girl for everything” and messenger. He was particularly interested in camera work because he hoped to travel to many exotic places.

In 1936 he was one of the first apprentices at Technicolor . He was soon called "Jack O'Lantern" (the English nickname for an illuminated Halloween pumpkin) because of his meticulous care when lighting the film sets . In 1937 he was a cameraman for Wings of the Morning , the first Technicolor film in England. In the 1940s he became the first cameraman for the Rank Film Organization , for whom he worked in black and white and color film productions, such as B. Caesar and Cleopatra (1945) and Error in the Hereafter (1946) worked.

Cardiff was soon a sought-after color film specialist and made some of the most important Technicolor films, including John Huston's African Queen (1951), Joseph L. Mankiewicz's The Barefoot Countess (1954) and Michael Powell's and Emeric Pressburger's The Black Narcissus (1947) and The Red Shoes (1948). The directors appreciated the brilliance of his colors and his very carefully considered and effective lighting work.

After gaining experience as a cameraman with great directors, Cardiff felt ripe to embark on a career as a director himself. His first major film as a director was the thriller Intent to Kill (1958). Sons and Lovers from 1960 became a great critics and box office hit and is now considered one of the style-defining films of the British New Wave . Cardiff was nominated for an Oscar for director and won a Golden Globe Award , while Freddie Francis received the award for cinematography.

In total, Cardiff directed 15 very different productions, most of which were artistically disappointing. He returned to his work as a cameraman in the 1970s, for which he was nominated five times for an Oscar , and remained active as a cameraman until 2007.

Cardiff had become aware of the importance of light through his lifelong enthusiasm for painting: “The Hollywood cameramen used a lot of backlighting because it made everything appear clearer and more glamorous. I also succeeded in this backlighting because I relied on what I had learned from the paintings: the simplicity of light. Paintings don't move, it's easy to create a lighting effect, and with film, where actors stand up and walk across the room, you had to be careful. But I understood and still believe that you have to stick to simple lighting. "

Cardiff sometimes took certain painters as models for certain films, such as Vincent van Gogh's strong color values ​​and contrasts for The Red Shoes . Cardiff also adopted specific ideas from the Impressionists : “When someone sits on the grass, they let the green light shine on their face. So I use nifty green filters sometimes. [...] I used fine blue filters when it should be cold, so I used their methods to enhance the color. I always struggled with the Technicolor folks because they wanted 'complete realism' whatever that was. "