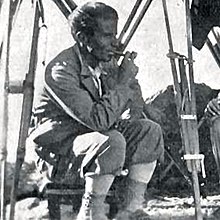 Hans Schneeberger (born June 7, 1895 in Brandberg , Tyrol , † November 19, 1970 in Salzburg ) was an Austrian cameraman and part of the so-called Freiburg School with Sepp Allgeier , Richard Angst , Albert Benitz , Arnold Fanck , Kurt Neubert and Walter Riml , one of the pioneering cameramen of mountain , ski and sports films .

Hans Schneeberger was an orphan even as a small child, but was supported by his father's former employer so that he could attend a secondary school after primary school.

Schneeberger took part in the First World War as a Tyrolean Kaiserjäger . After his mission in the rock of the Tofana , where the Austrians fought against the Italian army, he was awarded the Great Golden Medal for Bravery , which Emperor Franz Joseph I personally presented to him. This award, which is rarely given repeatedly, was later awarded to him again for his work on the Schreckenstein , also during the battles against the Italian army. The second honor was therefore only symbolically in the form of a written certificate and a repeat clasp. In order to have another medal in his hands instead, Schneeberger made use of the option to exchange the certificate and repeat clasp for a great silver medal of bravery .

He worked as a ski instructor and mountain guide to finance a degree in architecture at the Technical University of Munich .

Through these activities in addition to his studies, he came into contact with film people, whereby in 1921/22 he played a small role as a skier in the second part A fox hunt on skis through the Engadine of the silent film The Miracle of the Snowshoe from the Freiburg im Breisgau- based production company Berg- und Sport- Film GmbH received. He learned and worked with Sepp Allgeier and Arnold Fanck as a camera assistant and photo lab technician.

In the credits of the silent film Der Berg des Schicksals (1923) he was first mentioned as the second cameraman. He worked with the cameramen Sepp Allgeier, Arnold Fanck, Eugen Hamm and Herbert Oettel . 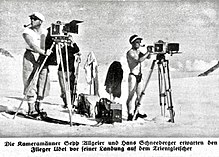 Sepp Allgeier (left, on skis) and his Austrian colleague Hans Schneeberger wait in 1930 for the landing of the pilot Ernst Udet while filming Storms over the Montblanc on the Trient glacier in the Mont Blanc massif in the Swiss canton of Valais

As one of Arnold Fanck's cameramen and as an employee and temporary partner of Leni Riefenstahl , Schneeberger has worked in over 120 films from Austria, Germany, Switzerland, Italy and England, including Alexander Korda . He had already taken over the camera work for Riefenstahl's directorial debut The Blue Light (1932).

When shooting in the open air, his achievement was not just to let nature flow into the film purely as a documentary, but as an element of tension. Here he advanced to become one of the most important representatives of the Impressionist camera style in German-language film. In studio recordings, on the other hand, he knew how to make the best possible use of the lighting effects.

He performed his best in The Holy Mountain (1925/1926), The White Hell from Piz Palü (1929/1935), Rivals of the Air (1934) and The Miracle of Flying (1935). After 1933, however, his work as a mountain cameraman was rarely in demand, so that he was mostly only involved in the production of entertainment films. His work on Gustav Ucicky's adaptation of Alexander Pushkin's novella Der Postmeister 1939/40 was outstanding .

Hans Schneeberger died at the age of 76 and was buried in Neu-Anif .