Hermetic Order of the Golden Dawn 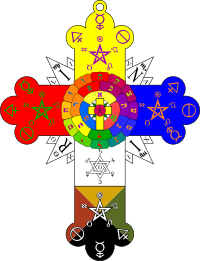 The Hermetic Rose Cross of the Golden Dawn

In contrast to the Theosophical Society , which increasingly oriented itself towards Eastern wisdom, the Golden Dawn saw itself as a continuation of the Western mysteries , especially the tradition of the Rosicrucians . As an esoteric working order , it became the prototype of similar organizations. Many of the modern magical or esoteric currents such as Wicca and Thelema can be traced back to this order.

All three founders - Westcott, Woodman, and Mathers - were both Freemasons and Rosicrucians of the Societas Rosicruciana in Anglia . Westcott and Mathers were also members of the Hermetic Society in London founded by Anna Kingsford . 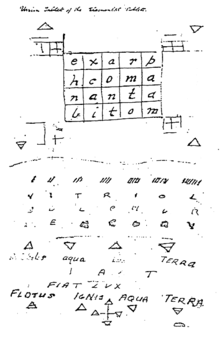 The foundations of the teachings of the Golden Dawn were taken from the so-called Cipher Manuscript, which, according to the legend of the order, is said to have been discovered by AFA Woodford under obscure circumstances. It was written in an alphabet similar to a traditional cipher from Abbot Trithemius , and could therefore be deciphered by Westcott. The manuscript contains in sketched form five initiation rituals, as well as corresponding teaching material, including a. the previously secret assignments of the tarot to the Hebrew letters . Furthermore, the contact address of a certain Soror Sapiens Dominabitur Astris (Anna Sprengel), a high adept of the Rosicrucians from Germany, is said to have been on one of the pages . William Wynn Westcott claims to have given her permission to found the Golden Dawn in the Outer (the outer order of the Golden Dawn). Finally, Westcott commissioned Mathers to develop the ritual sketches into workable rituals.

The opening of the Isis-Urania Temple No.3 in London in March 1888 was followed in the same year by the establishment of the Osiris Temple No.4 in Weston-super-Mare (Somerset) and the Horus Temple No.5 in Bradford (Yorkshire). It was not until 1893, at the request of some Scottish members, that Amen-Ra Temple No.6 was opened in Edinburgh , followed by the inauguration of Ahathoor Temple No.7 in Paris in January 1894.

Initially, only five degrees were ritually processed, which in their totality formed the outer or first order . In addition to the ritual work, only basic theoretical knowledge about Kabbalah , astrology , tarot and alchemy was imparted. The only exception was the small pentagram ritual , which was taught so that the student could get a first impression of the invisible forces and their control.

Until December 1891, the second or inner order , which was supposed to include the adept degrees, existed only administratively, as there were no corresponding initiation rituals. Only the so-called portal degree was created, which acted as a link between the outer and inner orders.

It was up to Samuel Liddell MacGregor Mathers to create this second or inner order , the actual magical order, the Ordo Rosae Rubeae et Aureae Crucis (Order of the Red Rose and the Golden Cross), also known as RR et AC for short . In the autumn of 1891 Mathers declared that he had made contact with the secret superiors , the members of the inner or third order, in Paris . He claims to have received further instructions for the establishment of the second order from a brother LET (Lux e tenebris) . He then created the central initiation ritual of the order, that of the Adeptus Minor Grades . For this purpose, the finding of the hidden grave of Christian Rosencreutz described in the Fama Fraternitatis is implemented ritually. The vault of the adepts is specially constructed, an accessible seven-sided initiation chamber. This vault is considered a reflection of the universe, among other things, its colored painted sides correspond to the seven planets. Inside is the so-called pastos, a sarcophagus in which the chief adept will lie during the ritual to embody the founder of the order Christian Rosencreutz. It was Annie Horniman who first went through the new Adeptus Minor ritual in December 1891.

Westcott was primarily responsible for the teaching content of the outer order, Mathers wrote almost all important instructions and textbooks of the second order. Immediately after initiation, the neophyte Adeptus Minor had to work through a catalog of instructions and textbooks. He had to manufacture and consecrate various magical objects, including the four "elemental weapons " staff, chalice, dagger and pantacle . Another frequently practiced technique was the so-called Traveling in the Spirit Vision , a method comparable to active imagination . More advanced documents dealing among other things with the early modern system of Enochian angel magic of John Dee . In addition to the official textbooks, the so-called Flying Rolls , treatises and field reports written by more advanced members also circulated among the members of the Inner Order .

After the death of William Robert Woodman in December 1891, whose function was not replaced, there was an underlying rivalry between Mathers and Westcott, which in 1897 finally withdrew entirely from all administrative leadership positions in the Order. Mathers, who had lived mainly in Paris since May 1892 and directed the order from a distance, then appointed Florence Farr as its representative in England. This provoked some arguments as some male members refused to submit to female leadership. In addition, Mathers' authoritarian and at the same time inconsistent leadership style led to various disputes. So was u. a. Annie Hornimann was excluded from the order in December 1896 for lack of subordination because of her persistent criticism.

The disputes reached a climax in early 1900, when the London adepts refused to accept the eccentric Aleister Crowley into the Inner Order . In a personal letter to his friend Isabella Augusta Gregory , William Butler Yeats mentioned the reasons Crowley was rejected: he said that a mystical society is not a reformatory , after all . Crowley then traveled to Paris to be initiated by Mathers himself into the degree of Adeptus Minor , but this was not recognized by the London adepts. Florence Farr got tired of Mathers' behavior and offered to resign. However, he did not want to go into it, as he suspected an intrigue behind it to bring Westcott back to the top. In a personal letter to Farr, he claimed:

This led to the open uproar of the London adepts, who set up a seven-member committee to examine these statements for their veracity. However, Westcott refused to comment on the allegations. After Mathers was not ready to appear in London before a committee that he did not approve in any way, he was released from his office, which amounted to an open rebellion.

On April 17th, Crowley, on behalf of Mathers, broke into the premises of the Second Order and had the locks replaced in order to obtain the Adepts' vaults and other materials. However, Yeats and other members of the Inner Order were able to prevent this through legal action. Mathers and Crowley were expelled from the Order, making the split final. Annie Hornimann was rehabilitated and made secretary to reorganize all material in the Order.

A few months later, Edward Berridge gathered the few adepts still loyal to Mathers and founded the Temple of Isis No.11 in London, which later became the Alpha et Omega Temple No.1 .

At a meeting of the Inner Order on May 3, 1902, Percy Bullock, Robert William Felkin, and John William Brodie-Innes were sustained as the presiding triad for one year. As a result, the outer order was renamed the Hermetic Society of the MR , where MR stands for "Morgenröthe". However, the attempt to put the leadership permanently on a democratic basis failed due to the different interests of the members. In 1903 John William Brodie-Innes tried to enforce his claim to leadership, but failed because of Arthur Edward Waite and his faction. Despite several meetings, it was not possible to agree on a leading triad.

Independent and Rectified Rite of the Golden Dawn

The majority of the remaining, more magically oriented, members then founded the Amon Temple under Felkin and Brodie-Innes , which became the main temple of the Stella Matutina. The Stella Matutina also subjected the rituals of the original Golden Dawn to extensive revisions, which were thereby significantly improved and expanded.

In the following years Brodie-Innes tried to revive the fallen Amen Ra Temple No.6 in Edinburgh. He secretly contacted Mathers, with whom he was reconciled, and eventually switched to Alpha et Omega .

The earth pantacle, one of the four "elemental weapons"

The teaching content of the Golden Dawn consisted of numerous occult and mystical traditions, such as Kabbalah and Tarot , astrology , alchemy and the Enochian magic Dees as well as magical work with the gods of ancient Egypt and Greece. Elements of Christianity and Judaism were integrated syncretistically . The degree system was initially divided into nine, later into eleven degrees, which are related to the Kabbalistic ten Sephiroth . Many occult organizations today use Golden Dawn study materials. For example in some Wicca cult groups his pentagram rituals are used, which are unchanged from the Golden Dawn.

Successor organizations to the Golden Dawn

Groups working in the tradition of the Golden Dawn

Groups working in the tradition of the Golden Dawn

The Golden Dawn Tradition and its Successor Organizations