The title of this article is ambiguous. Further meanings are listed under Robert Parker (disambiguation) . 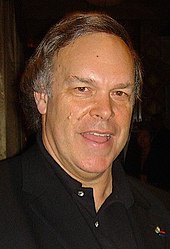 Parker is a trained attorney and has been a professional wine journalist for many years. His wine evaluations with the numerical Parker points are internationally a decisive factor in price formation on the wine market. He uses a 100 point system, with 100 points being the highest grade. American wine merchants, for example, not only award their wines with the price, but also with the Parker rating such as “93 PP” (Parker points).

Parker publishes its reviews in its bimonthly newsletter “The Wine Advocate” and the books “Bordeaux”, “Rhône Valley” and “ Parker's Wine Guide ”. At the beginning, his original domain was wines from France , especially Bordeaux , Burgundy and the Côtes du Rhône . Wines from other countries were added later. Parker employs a large team of tasters for this purpose. Every year he publishes a “Vintage Guide” in his Wine Advocate , in which he evaluates the maturity and drinkability of the wines of the most important growing areas in relation to the current point in time.

Parker is a graduate of the University of Maryland, College Park , majoring in History and the History of Art as minor. He then attended the University of Maryland Law School in Baltimore , from which he graduated after three years with the degree of Juris Doctor . Parker then worked as an attorney for the Baltimore Farm Lending Bank for more than a decade. He quit in March 1984 in order to devote himself full-time to wine evaluation.

In 1975 he began writing an independent consumer-oriented wine guide. Parker wanted to be a consumer advocate , unencumbered by the need to sell wine. In 1978 he began working on his newsletter, The Wine Advocate . The first issue was a supplement to mailing lists that he had bought from larger wine merchants as addresses. The newsletter had 600 subscribers in August 1978. To this day, it is not financed through advertisements, but through subscriptions.

Parker received worldwide attention when he proclaimed the 1982 vintage from Bordeaux as a superb year, unlike many other critics who believed the year was too acidic and overripe. The debate over whether 1982 is an age-resistant year continues to this day. But the wine market seems to have spoken, it raised the prices of these wines far above those of the following vintages.

Twenty years later, The Wine Advocate newsletter had over 40,000 subscribers in 38 countries.

In addition to writing and tasting for The Wine Advocate, Parker contributed as a writing editor for a number of periodicals, wine and food magazines. He also wrote regularly for the English magazine "The Field" and became the wine critic for the French magazine "L'Express": the first time that a non-French had taken this position.

At the end of 2012, Parker sold his "Wine Advocate" for US $ 15 million to three Asian investors under the leadership of Singapore- based Malay businessman Soo Hoo Khon Peng. Parker also withdrew from the chief editor. The new editor-in-chief was the “ Master of Wine ” Lisa Perrotti-Brown, who also operates from Singapore.

Lisa Perrotti-Brown announced on July 5, 2017 that the French tire manufacturer Michelin , who is also the publisher of the hotel and restaurant guides , has acquired a 40% stake in Robert M. Parker The Wine Advocate and the RobertParker.com website .

Parker wrote eleven books on wine that became bestsellers not only in the United States but also in their translated editions in France, Japan, Germany, Sweden, and Russia.

In November 1985 his first book was published by "Simon and Schuster". The Bordeaux edition was reprinted six times, was a Book of the Month club's choice, and received international critical acclaim. An English edition on Bordeaux was published by Dorling, Kinderseley Ltd. in London. relocated. It won the prestigious Glenfiddich Prize for England's best wine book in 1986. The Paris-based solar company published the volume on Bordeaux in 1989, and three editions immediately appeared. The French book club, the largest in the world, also voted the book “Book of the Month” in January 1991. Foreign-language editions of the Bordeaux Guide were published in Japan, Germany and Sweden.

1987 brought out "Simon and Schuster" two more wine books by Parker, "Parker's Wine Buyer's Guide", and "The Wines of the Rhône Valley and Provence" (German edition: Parker Rhône ). The book about the Rhône and Provence wines won the "Tastemaker's Award" for best wine book of the year published in the USA in 1989 and the "Wine Guild's Wine Book of the Year Award" in Great Britain.

In April 1989 his second “Wine Buyer's Guide” was published (German edition: Parker's Wein Guide ), and his fifth book on Burgundy came out in 1990. "Burgundy" was also published in France and England. In autumn 1991 a revised and considerably expanded Bordeaux edition came out. It also appeared in Japanese, German ( Parker Bordeaux ) and French. The Gastronomische Akademie Deutschlands e. V. awarded him the "Goldene Feder" in 1993 for the licensed edition of "Bordeaux" published by Hallwag Verlag. In 1993 the third edition of the "Wine Buyer's Guide" came out. 1997–1998, the French edition of the shopping guide “Le Guide Parker” was in the top ten of the best-selling books for 27 weeks. In 1995 the fourth edition of the shopping guide appeared, a book that became a commercial and journalistic success. In England and France it was published repeatedly under the name "The Guide Parker". In 1998 his tenth book came out, a third edition of the Bordeaux Guide, and was published in Germany, England, France, Japan and the USA.

Parker rates the wines and vintages in its 100-point scheme, specifies price categories and awards the wineries from average to excellent between 1 and 5 stars.

In 1993 Parker received the Moët Hennessy Wine and Vine Communication Award for his French editions on Burgundy and Bordeaux. In 1995 Parker became the third honorary citizen of the wine-growing community of Châteauneuf-du-Pape in the Rhone Valley . In May 1998, Robert Parker was recognized by the James Beard Foundation, whose awards represent the highest honors for writers in the hospitality and wine industries.

On March 29, 1999, French President Jacques Chirac signed a decree making Parker a Knight of the Legion of Honor . He was honored in a ceremony at the Élysée Palace on June 22, 1999. As early as 1993, the late President François Mitterrand had appointed Parker to bear the Order of Merit . Robert Parker is one of the few foreigners to have received both of France's top two presidential awards.

Influence on the wine industry

In the USA in particular, numerous retailers rely on Parker points when marketing their wines. A Parker rating of 90 means it is a high quality wine. This rating often prompts buyers to buy such a wine without having tasted it first.

The famous “ Grand Crus ” from Bordeaux also rely on Parker ratings for their marketing. In order to sell their wines better, many wineries modify their production processes in the vineyard and cellar so that wines are produced in the style that Parker prefers and scores highly. The French oenologist Michel Rolland , who is a friend of Parker and who specializes in full-bodied, deep-fruity wines with a lot of barrique , is often employed as a consultant to optimize Parker-style wine production . This manner took some “boutique wineries” (→ garage wines ) with the lowest yields to extremes, which enjoyed great popularity as a result of Parker's ratings.

Parker's influence is discussed controversially among connoisseurs of elegant, finely structured wines. They criticize Parker's influence on European viticulture, as he rates wines higher that correspond to the taste expectations of American consumers. These often stand in contrast to the historically grown wine and taste traditions of many wine regions in Europe. The result is a slow leveling of regional wine styles. As a result of this "Parkerization", refined, complex structured wines are increasingly disappearing from the offer. “Parker wines” are often over-concentrated (“fat”), too fruity and have too high a proportion of oak aromas, alcohol and extracts.

The French lawyer Hanna Agostini was Parker's employee from 1995 to 2003. At first she organized tastings for him in the Bordelais, and later she translated Parker's newsletter into French. Agostini and Parker separated when it became known that Agostini offered consulting services to wineries and trading houses and is said to have advertised them with their good contacts to Parker. In her book "Robert Parker - Anatomie d'un mythe" (Robert Parker - Anatomy of a Myth), published in France in 2007, Agostini casts doubt on Parker's righteousness and the independence of his wine judgments. She claims that Parker only spends “seven days a year” in France. Parker's tastings are also not prepared by independent experts or paid employees, but by wholesalers from his circle of friends. Agostini also mentions names: Dominique Renard, Jeffrey Davies, Bill Blatch, Archibald Johnston and the well-known wine consultant Michel Rolland. A short time later, a critical article about Parker appeared in Stern magazine commenting on some statements from Agostini's book.

In the third edition of his Wine Buyer's Guide in 1993, Parker reported that the Domaine Faiveley winery, among others, bottled various tranches. The tranches exported to the USA would taste less good than the Faiveley he tested at the winery, which Parker then sued. In February 1994, the trial before the Paris was the Tribunal de Grande Instance with a comparison settled.

When Parker began his work as a wine critic in the late 1980s, it was a novelty for an expert to taste and judge wines without being openly involved in business with wine producers or traders. Parker's blind tastings and the fact that its newsletter The Wine Advocate did not have advertisements were also new . Parker now employs a large tasting team, some of whom have commercial ties to the winemaking industry.

There are studies of Parker's influence on wine prices. A bottle of upscale wine therefore receives exactly the price that corresponds to its rating in Parker points by Parker and his employees. Since no one is attacking Parker directly, Hay Colin writes in his study that Parker “dictates” the price, but his judgments are conservative and correspond well to the 1855 classification of Bordeaux wineries.

For many top producers in Bordeaux, the sharp rise in prices for Bordeaux premium wines in the 1990s is also an effect of Parker's activities.

"Imperial hegemony lives in Washington and the dictator of taste in Baltimore."

"The Baltimore attorney certainly has a great nose."

“All of these wines [...] were rated by the pope of criticism with the highest grade of 100 points, so they are perfect in his opinion. Of course that's perfect nonsense. On the one hand, such an absolute evaluation is radically subjective. 'You have to like the wine, not Mr Parker', my colleague Eckhard Supp rightly pointed out to his readers. "

“In the US, Parker's influence (and that of the Wine Advocate) has never been greater. It now seems increasingly clear that certain Right Bank châteaux produce their wines almost exclusively for the US market, restyling them to conform to what they take to be Parker's preferences. "