Wendenschloß is a location in the Berlin district of Köpenick in the Treptow-Köpenick district . The area is surrounded by the Langen See in the west and south, the Müggelberge in the east and the old town of Köpenick, the settlement of Kietz and Kietzer Feld as well as the new development areas of Müggelheimer Straße and the Salvador-Allende-Viertel  I in the north.

The actual historical part and origin of the Wendenschloß location only includes the villa colony , which is bordered to the north by Lienhardweg (until 1939: Eichhornstraße ) and was created at the end of the 19th century. The establishment of a was preceded by 1,890 ferry from Grünau on the Long Lake (today as BVG ferry line F12 operated) and later the construction of the tram to the palace square Cöpenick by the Urban tram Cöpenick in 1903. Since the extension of the railway to Mahlsdorf 1907 Today's line 62 is the longest existing tram route in Berlin, the route of which has remained the same. 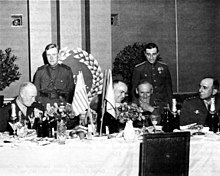 The Berlin Declaration was signed on June 5, 1945 at Niebergallstrasse 20 by the Commander-in-Chief of the Allied occupying powers, Marshal Schukow , General Eisenhower , Field Marshal Montgomery and General de Lattre de Tassigny , which is still remembered today by a plaque. The building, which was later renamed the Wendenschloß restaurant, was placed under monument protection. After reunification , the Treuhandanstalt sold it to a building contractor who had it demolished.

The former name of the area was Eichhorn , which was first mentioned in 1516 as Im Eichhorn according to a document contained in the Codex diplomaticus Brandenburgensis . At the end of the 1880s, the Wendenschloß or Wendenschlößchen inn was built on the site by the ferryman Wöse . The name of the restaurant was transferred to the emerging villa colony and was made official in 1905 by resolution of the Cöpenick magistrate . For the Brandenburg name researcher Gerhard Schlimpert it is certain that the name refers to the Slavic past of the Köpenick area, to the Wends . Although Köpenick was inhabited by the Sprewanen before the German settlement in the east , many West Slavic groups were subsumed under the name Wenden at the time it was named. In addition, the inn was located on the Langen See, a typical channel lake through which the Dahme flows. The Dahme was - even in the Köpenick section - after turning often referred to as "Wendish Spree", for example, in the then widely read Walks through the Mark Brandenburg by Theodor Fontane . This name interpretation also follows Reinhard E. Fischer in the place name book Brandenburg and Berlin.

View of Wendenschloß (across the Langen See , the regatta course on the right)

Wendenschloß now has a wide range of sports clubs which, due to the good conditions, mainly concentrate on water sports . In addition, there is the Wendenschloß lido and numerous bathing spots on the Long Lake, which serve as excursion destinations for the Berlin population in summer. Forest restaurants such as the butterfly nest are further starting points for day trippers. In the mentioned Niebergallstraße, house number 28, there is a specimen of a Fagus sylvatica 'Purpurea' (copper beech), which is listed as a natural monument .