As sociological system theory is one on system theory based discourse and concepts theory of sociability as part of a general sociology designated. The sociological system theory claims to be a universal theory in the sense of a comprehensive and coherent theoretical structure for all forms of sociality (e.g. relationships of two, families, organizations, functional systems, society). It thus also includes itself as the object of its theory, i.e. operates in a self-referential manner .

Based on ethnological and anthropological questions of the examined structural functionalism ( Alfred R. Radcliffe-Brown , Bronislaw Malinowski , Edward E. Evans-Pritchard ) the question of how structures the behavior of individuals within a society determine . All social structures were asked about their function . The totality of social relationships and interactions in the social network of a society is understood as a structure. These structures of a society are viewed as extremely stable and can only be changed by external factors. In this sense, structural functionalism looked for the prerequisites for the existence of social systems and social structures. The results were essentially lists of inventory requirements and variables. The limitation to segmental societies , such as tribes , was justified by the fact that an isolable, limited research object was needed in order to be able to make statements at all.

The sociological concept of system goes back to Talcott Parsons . The system theory developed by Parsons "wants to understand the community as a connection ('system'), namely as an interpersonal behavioral structure ('structure'), the parts of which are mutually dependent ('interdependence'). Such a behavioral system is formed by people adjust their actions to one another according to certain behavioral expectations ... Individuals are involved in certain 'roles' in the more or less stable behavioral structures ". From this point of view, the normative, in particular the legal controllability of behavior has a central function for the formation of a community. Parsons regards actions as constitutive elements of social systems. He coined the term structural-functional systems theory. The term structure refers to those system elements that are independent of short-term fluctuations in the system-environment relationship. Function, on the other hand, describes the dynamic aspect of a social system, i.e. those social processes that are intended to ensure the stability of the system structures in a changing environment. The structural-functional theory thus describes the framework that controls action processes. If the structure of a system is known, functional analyzes can indicate which actions are functional or dysfunctional for system stabilization. Actions are therefore not viewed in isolation, but in the context of the structural and functional aspects of the respective social system.

For the structural and functional analysis of social systems, Parsons developed the AGIL scheme , which systematizes the functions necessary for maintaining the structure . Accordingly, all systems must fulfill four elementary functions:

Individual actions are not isolated, but viewed in the context of a structural and functional system context. Actions are the results of the system context that is established by these actions (action-theoretical systems theory). Parsons describes the relationship between system and system elements as recursive and thus takes mutual enabling, reinforcement and feedback conditions into account.

Extension and reformulation by Luhmann

The peculiarity of Luhmann's point of view is that communication - as the operation of social systems - is not seen as action that is carried out by individual people. In particular, it is not about effects from person to person that an observer can determine as causality (monocausality, multi-causality or causal chain). Nor is it about the transmission of information that can be understood as a metaphor. The term communication describes an operation in which social systems arise. Communication can only follow on from communication, and in this way these operations run simultaneously and in parallel with the operations of other systems (e.g. thoughts as operations of psychic systems, synonymous with consciousness systems). Even people do not exist as agents, but as units constructed by communication (“points of identification”).

Society is the comprehensive system that is differentiated into functional systems . In this way, among other things, law, economy, science, politics, religion emerge as functionally differentiated systems. These systems - not people - observe using specific distinctions (right / wrong in the legal system, true / false in the science system, allocation / non-allocation in the economic system, immanence / transcendence in the religious system, or government / opposition in the political system). These distinctions or codes form the framework within which the subsystem can create shapes. The code ensures the operational closure of the system. Programs that opt ​​for one side or the other of a decision ensure the openness of the system. As an example of a system program, theories in science can be mentioned that decide on an assignment to one of the two sides true / false. 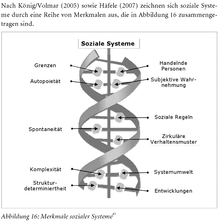