An argument ( Latin argumentum 'presentation; content, evidence, reason' from Latin arguere 'clearly to be recognized, claim, prove, show' ) is typically used to justify something or to convince someone. In linguistics and philosophy , an argument is understood to be a sequence of statements that consists of a conclusion and possibly several premises , the conclusion being the statement that is supposed to be justified (also called: supported) by the premises. Colloquially, however, an argument is often only understood to mean the premises that serve to justify the conclusion.

Several related (e.g. building on each other) arguments form an argument. Anyone who makes arguments and puts them forward in writing or orally is an argument. In a discussion , arguments are examined and weighed against each other.

The argumentation theory is the science of reasoning. It is closely related to both logic , which examines the objective validity of argument forms, and rhetoric , which deals with how arguments can be convincingly put forward and formulated.

Arguments consist of premises and a conclusion, where the premises are typically intended to justify the conclusion. Arguments are often used to convince someone. Accordingly, there are different points of view from which one can view an argument:

Fundamental properties that an argument can have with regard to its rational strength are: deductive validity , inductive strength , relevance , soundness , circularity .

If one adds to the argument in example 7 as a further premise that my doctor is drugged and that his deputy has put me on sick leave, this becomes an inductively weak argument. This illustrates the non-monotony of inductively strong arguments.

Many arguments contain premises that are irrelevant because they can be removed without the argument becoming deductively invalid or losing inductive strength.

The argument in Example 8 is deductively valid; However, the premise (2) is not relevant in this argument, because conclusion (4) already follows from (1) and (3).

The properties of deductive validity and inductive strength only characterize the relationship between premises and conclusion. They say nothing about whether the premises are true or false. An inductively strong or deductively valid argument, which also has the property that all its premises are true, is called sound.

After everything we know today about the Nördlinger Ries, the argument in Example 1 is not only deductively valid, but also sound.

The following argument ( example 9 ), however, has false premises:

Arguments can be characterized and classified according to their form. To do this, consider the arguments in Examples 10 and 11 :

For example, the arguments in Examples 10 and 11 have the same form insofar as they are both based on one and the same scheme (see Example 12 ).

The same argument can be based on different schemes.

In order to systematize and classify arguments, a distinction is made between the logical closing forms and further argumentation models in which content-related expressions are used (see, for example, the schemes in Examples 13 and 14 ).

Arguments following the patterns in Examples 13 and 14 - such as Examples 15 and 16 - are usually not deductively valid.

When we argue with one another or with ourselves, we almost never carry out arguments in full: premises are often only hinted at, and often also implicitly assumed; the conclusion often emerges only from the context.

The argument analysis aims to identify all the implicit, i.e. H. To make non-mentioned components of an argument transparent and thus accessible to a critical assessment. The analysis of arguments is essentially a hermeneutic method : it is used to systematically interpret a text or a speech from the point of view of justification. There is room for interpretation in the analysis and reconstruction of arguments.

A central guiding principle of argument analysis is the principle of benevolent interpretation . It calls for the existing scope for interpretation to be used in such a way that a justification is reconstructed as the strongest and most convincing possible argument. 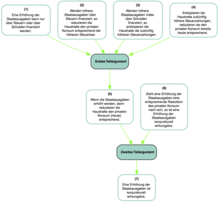 Inference diagram of an economic liberal argument created with argdown.org.

The internal structure of an argument can be visualized using so-called inference diagrams (see the illustration of example 4 in the figure on the right).

Entire debates in which arguments are supportive and attacking can be analyzed and presented as argument maps.

How, in turn, the results of a detailed argument analysis (which are available in standard form and possibly as an argument map) in a running text depends in particular on

There are no recipes for writing such texts. Overly rigid guidelines for writing argumentative texts (such as those found in German didactics under the keyword “ discussion ”) are judged critically.

Immediate and final goals of arguing

Anyone who argues initially only shows contexts of reasoning and claims that certain statements necessarily justify another statement, or at least make it plausible. Clarifying such contexts of justification can in turn serve very different goals, e.g. B .:

Arguments exercise - to paraphrase Habermas - only a “peculiarly informal compulsion”: They force us to accept a conclusion as true (or plausible) if we accept the premises. However, this constraint remains informal in that they always give us the choice of rejecting a premise instead of agreeing to the conclusion. In other words, arguments can force changes to a belief system as a whole, but leave open exactly how a belief system needs to be modified.

Besides arguing, there are numerous other methods of convincing yourself or another person of something. Observation or intuitive heuristics are examples of non-argumentative belief formation. Ways of forming beliefs can be examined from the point of view of their rationality ( epistemology ), their actual persuasive power ( rhetoric ) or their psychological functioning ( cognitive science ). Non-argumentative belief formation is not necessarily irrational. At the same time, arguing is considered a paradigmatic method of rational conviction formation .

There can be various reasons why an act of reasoning fails and the arguing objectives are not achieved. Here are some examples:

First obstacle: Missing or inconsistent terminology. Discussants often lack suitable terms or a shared understanding of the term to be able to speak precisely about arguments. This means that contexts of justification and discussion cannot be addressed at all, reflected on together and, if necessary, corrected. For example, it is not possible to distinguish between different forms of criticism.

Second obstacle: false tolerance. Tolerance can be misunderstood as an imperative not to contradict others and / or not to raise objections to their views. This attitude prevents from the outset any reasonable discussion and especially the careful examination of arguments.

Third obstacle: righteousness. The unconditional desire to be right in discussions can lead to ignoring or deliberately misunderstanding the arguments of others and to masking known weaknesses in one's own reasoning. This can negatively affect the argumentative quality of a discussion and, in particular, prevent arguments from being examined impartially.

Fourth obstacle: excessive relativism. Generalized, often misunderstood and exaggerated relativism and constructivism can lead to the fact that one no longer tries to critically examine claims and their justifications. (Variations: "In principle, every claim can be justified equally well", "Everyone has their own truth", "Everything, including science, is arbitrarily socially constructed", "Everything is subjective".)

Fifth obstacle: deliberation stopper. An argumentative exchange of ideas can be broken off with different rhetorical strategies (such as ad hominem arguments ). This prevents a reasonable discussion and, in particular, the critical analysis of arguments.

In addition to the formal rules of logic and argumentation theory, various rules for discussion, discourse, debate or argumentation were generally proposed. Among other things, they are researched in discourse theory .

What exactly is a good discourse or a good discussion naturally depends on the goals that the participants pursue. There are numerous lists of such rules, but they have been developed for very different purposes of discourse or discussion (see culture of dispute , rules of discussion ).

On the one hand, arguing can be understood as a normative practice: one can argue right and wrong, just as one can calculate right and wrong. This is the perspective of argumentation theory, discourse theory, and logic, in which arguments are evaluated from the point of view of rational strength (see Basic Properties of Arguments ).

On the other hand, arguing can also be viewed purely descriptively: the actual argumentative practice is described as adequately as possible and an attempt is made to explain argumentative behavior. Very different disciplines examine arguing from this perspective:

In political science and sociology , social and collective mechanisms of political debate and deliberation are in the foreground.

In communication sciences , for example, the relevance of arguments in public debates is determined using empirical discourse analyzes .

In psychology and cognitive science , the cognitive foundations of reasoning are explored. In the last few decades, cognitive science has gained numerous and in some cases groundbreaking empirical insights into argumentation. Above all, the work of Daniel Kahneman and Amos Tversky should be mentioned here. Empirical research shows that actual thought processes rarely fully satisfy the ideal of rational argumentation. As a rule, we orientate ourselves on approximate, fast heuristics , which are at the same time prone to errors.

With the insight that arguments can be characterized and classified according to their form , Aristotle established logic and argumentation theory. Particularly strict and detailed rules of justification-oriented discussion were already developed and practiced in medieval scholasticism (see disputation ). From a rhetorical point of view, i. H. With regard to their persuasiveness, Arthur Schopenhauer discusses effective argumentation strategies in the Eristic Dialectic . Thank God Frege is the founder of modern logic, the powerful theory of deductively valid reasoning. In a countermovement to this, Stephen Toulmin and other proponents of informal logic have shown that it is not just the formal-logical form that distinguishes interesting and revealing types of arguments.