Tintern Abbey ( Welsh Abaty Tyndyrn ) is a ruined monastery in the Welsh Wye Valley near the village of Tintern . The abbey was founded by the Cistercians in 1131 . It was the first Cistercian monastery in Wales and the second oldest in Great Britain. The monastery was dissolved in 1536. Since then, the abbey fell into disrepair until it was rediscovered as a tourist destination at the end of the 18th century, in the age of romanticism .

Tintern Abbey was donated on May 9, 1131 by the Anglo-Norman nobleman and Lord of Chepstow Walter de Clare . He followed the example of his relative William Giffard , who as Bishop of Winchester had founded the first English Cistercian monastery in Waverley , Surrey three years earlier . The Tintern monks came from L'Aumône Monastery , a subsidiary of the Cîteaux Monastery , the place of origin of the Cistercian order. The community grew rapidly and a subsidiary was founded in Gloucestershire as early as 1139 ( Kingswood Abbey ). In 1200 or 1203 another foundation followed in Ireland ( Tinternparva Abbey ).

Interior view of the monastery church

The first monastery buildings were completed in 1136. Only a few remains of these buildings remain, as the abbey has been expanded and rebuilt several times over the centuries. Most of the ruins that are preserved today date from the second half of the 13th century. At the time, Tintern Monastery had a significant income from land holdings on both sides of the River Wye . In addition, Roger Bigod, 5th Earl of Norfolk and Lord of Chepstow appeared as patrons of the monastery. Thanks to his financial support, the new monastery church was completed in 1301. The Gothic church was built in the decorated style in the shape of a cross. The central nave had two aisles, and chapels were housed in the transverse arms . The cloister and the monks' quarters were north of the church.

In the mid-14th century, Tintern was one of the few Welsh abbeys that were not involved in the battles between King Edward II of England and Queen Isabella , although Edward had spent two nights in the remote monastery in 1326. In contrast, Tintern suffered from the plague epidemic of 1349, which led to a significant decline in the occupation of the monastery and the tenants of the manors. At the beginning of the 15th century, parts of the property were destroyed during the uprising under Owain Glyndŵr . The monastery tried to compensate for this financial loss by entertaining pilgrims. The abbey housed a statue of the Blessed Virgin Mary , believed to have miraculous powers.

After the establishment of the Anglican State Church by Henry VIII , the order was forced to dissolve the monastery . On September 3, 1536, the last abbot Wyche handed the monastery over to the crown. At that time the community consisted of the abbot, 12 monks and 35 servants. Despite its small size, Tintern was the wealthiest monastery in Wales. The valuables were given to the royal treasury, the buildings to the Earl of Worcester . He had the lead roof removed, leaving the abbey to decay.

Rediscovery of the ruins of the monastery 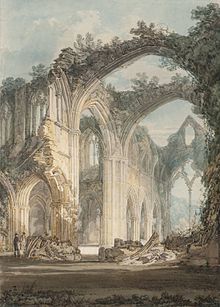 William Turner: The Chancel and Crossing of Tintern Abbey, Looking towards the East Window, 1794

After giving up the monastery, Tintern was forgotten. At the end of the 18th century, however, the pristine regions of Great Britain became popular excursion destinations. The valley of the Wye was praised by the romantics for its picturesque landscape. After Rev. William Gilpin published the popular guidebook Observations on the River Wye in 1782, the Tintern ruins were visited by tourists in droves. The then owner of Tintern, the Duke of Beaufort , began carefully conserving the ruins.

In 1782 the English painter Thomas Gainsborough visited Tintern Abbey and made pencil sketches of the ruins. But it was only after the landscape painter William Turner visited the abbey in 1792 and exhibited his watercolors two years later that the ivy-covered ruins became a popular motif for other painters as well. In 1793 William Wordsworth visited the facility. Five years later he formulated his impressions of the ruins in the poem Lines Composed A Few Miles Above Tintern Abbey, On Revisiting The Banks Of The Wye During A Tour. July 13, 1798 ( Tintern Abbey for short ), one of the most famous literary works of English Romanticism. Following the example of Tintern, the cathedral in Enniscorthy was designed in 1843 by AWN Pugin .

In 1901 Tintern Abbey was recognized by the British Crown as a Monument of National Importance and bought for £ 15,000. Extensive restoration work began and was completed in 1928. The ivy had to be removed to preserve the masonry. The foundation walls of some of the monastery's outbuildings were exposed, giving an insight into the structure and organization of the monastery. Open to the public, it is now considered to be the best preserved medieval church ruin in Wales. Since 1984 Tintern Abbey has been administered by the Welsh Heritage Agency , Cadw .