Chepstow Castle as seen from the Wye 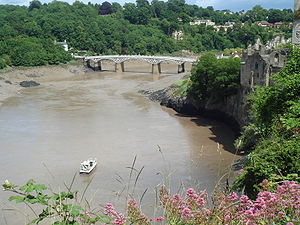 Chepstow (Welsh: Cas-gwent) is a town on the border between Wales and England . This is where the counties of Monmouthshire and Gloucestershire meet. It is on the west bank of the Severn , near the confluence with the Wye . The town is known for Chepstow Castle and the racecourse where the Welsh Grand National Race is held.

There has been a settlement at the confluence of the Severn and Wye rivers since the early Middle Ages. At the time of the Norman conquest, it was called Striguil, derived from the Welsh word “ystraigyl”, which means “bend in the river”. The name Chepstow came later from the Old English word "ceap / chepe stow", which meant "marketplace".

The oldest evidence of settlement can be found next to the Heston Brake at the fortified Iron Age settlements at Bulwark and Piercefield . In Roman times there was likely a bridge or ford across the Wye. This is said to have been where the current bridge crosses the river. An alternative location is also considered a location 1.5 km upstream at Castleford .

Chepstow is right on the former border of the Roman cities of Gloucester and Caerwent . The town is also close to the southernmost point of Offa's Dykes , which begins on the east bank of the Wye and runs to the Irish Sea in North Wales. This earth wall was raised in the 8th century as a border between England and Wales. Recent research now doubts that the wall at Chepstow belongs to the actual Offa's Dyke.

Chepstow Castle is the oldest preserved stone fortress in Great Britain. After the Norman conquest, Chepstow was considered an ideal location for a castle. On the one hand you could control the Wye from there and on the other hand the steep sandstone cliff together with a narrow valley as the only access offered an excellent defensive position.

Since the kingdoms were independent from the English crown at the time, the castle also served to suppress the Welsh and keep them from invading Gloucestershire.

After the wars between England and Wales ended in the 14th century, the importance of the castle declined. A town, a church and a port were built around the castle. In 1294 Chepstow was granted the right to hold a market once a week and a festival once a year. Another reason for the city's boom was that it was not subject to English tax liability.

During this time the city wall called the Port Wall was also built. It is almost completely preserved today. Particularly well-preserved parts can be seen at the Welsh Street parking lot, on both sides of the A48. The Town Gate city gate on High Street was rebuilt in the 16th century and served as a customs post.

The most important church in the city is the Church of St. Mary. Like the castle, it is of Norman origin, although it was rebuilt several times in later centuries. It was the religious center of the city and housed a school and a monastery, which no longer exist. Benedictine monks from Cormeilles in Normandy lived in it . When the monasteries were dissolved in 1536, they disappeared. Cormeilles is now Chepstow's twin town.

In addition to its importance as a market town, Chepstow has been the largest port in Wales since the Middle Ages. In 1790 and 1795 more goods were handled in Chepstow than in Swansea , Cardiff and Newport combined. Although almost only wood from the Wyetal was traded, the shipping routes led from Iceland to Turkey. France, Portugal and Ireland were also frequented. In many cases the ships were even built in Chepstow.

In 1840 the leaders of the Chartist uprising in Newport were deported from Chepstow to Van Diemens Land , what is now Tasmania .

Other products transported from Chepstow included wire produced in the wire mills on the tributaries of the Wye, leather dyed with the dye from oak bark from the surrounding forests, and paper mainly from the Mounton paper mill came from. It was there that the first high-quality paper was made, which the Bank of England used for its notes. Chepstow served as an interim storage facility for the import of goods. Large deliveries could be unloaded in the deep waters of the Wye at high tide and there were divided into small quantities, which were then transferred to smaller boats. These then took the goods up the Wye to Hereford , to the Mint in Redbrook, or up the Severn to Gloucester and the hinterland. There was brisk trade with Bristol across the Severn Estuary . With a suitable tidal range , boats could travel up the Avon to Bristol.

In the 19th century the port became less important and shipbuilding fell into a crisis. Cardiff, Swansea and Newport were now the centers of trade as it was cheaper to export from there the coal and steel mined in Glamorganshire and Monmouthshire . The shipbuilding industry once again flourished briefly during World War I when the first ships were built from prefabricated parts, the so-called WAR ships . The best-known representatives of this type of ship, which left the shipyards in Chepstow, were the "War Glory" and the "War Illiad". However, 10,000 gross register tons was the size limit that could be built in Chepstow. The last ship built in Chepstow sank in 1956 in the South Atlantic with no survivors and a cargo of grain. In addition to the existing shipyards of E. Finch & Company and the Monmouth Shipbuilding Company , the British government founded the state shipyard National Shipyard No.1 in Chepstow in 1917 as part of a replacement program for lost merchant ships.

The area called "Garden City" and parts of Bulwark were built in 1917 to house the recruited workers of the National Shipyard No. 1 Werf. Today two thirds of the population of Chepstow live in Bulwark.

The shipyards were at the point where the railway bridge crosses the Wye. They were later bought by the Fairfield Mabey company and converted into steel mills that built bridges and lock gates. Among other things, they manufactured the lock gate for the port in Avonmouth , the installation of which resulted in an accident with several deaths.

In recent years, the raw material for artificial ski halls has also been manufactured there. A large number of buses that are exported to Africa also come from Chepstow.

The old cast iron bridge over the Wye from 1816 was built by John Rastrick . It is an excellent example of Regency Age engineering. The bridge consists of five cast iron arches that rest on stone pedestals and has a span of about 45 meters. It is the last of several wooden bridges that had been built there since at least 1228. In 1576, the then bridge was declared dilapidated and a law was passed that the counties of Gloucestershire and Monmouthshire were each responsible for repairing their half. Since no one cared about it, the bridge finally collapsed in 1606 and was carried away by the river, so a new bridge had to be built. At the beginning of the 18th century, the bridge consisted of wooden planks supported by a central stone plinth and five wooden plinths on each side. In 1785 the Monmouthshire side was replaced by stone plinths while the other side was still made of wood. This only changed when the bridge was rebuilt in 1815 by John Rennie.

Before the Severn Bridge, now part of the M48 motorway, was built in 1966 and a second in 1988, all traffic between England and South Wales passed through this bridge. The Severn Bridge has the largest span in Great Britain. The Aust Beachley ferry, which had existed until then, was then discontinued. 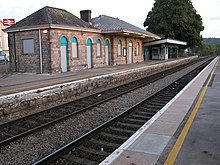 The city's train station is served by the line that runs from Gloucester to Newport. Until 1959 there was another line running from Chepstow to Monmouth. However, it was discontinued for financial reasons. The railway bridge over the Wye was designed by Isambard Kingdom Brunel in 1852, but replaced in 1966.

A lot of money has gone into urban renewal in recent years. Several residential building lots, particularly in Bayfield, were designated and a new hospital was inaugurated in 2002, the Chepstow Community Hospital. £ 2 million has been invested in the renewal of the city center. For this purpose, sculptures and other works of art were set up. Although the city was criticized for its high cost, it also won several prizes for its high-quality design.

The city center is well supplied with all kinds of shops. The river bank has been redesigned to make it more attractive to deal with flooding. The city regularly hosts a biennial festival and events on the city's history. Opposite the castle entrance is the local history museum.

Industrial areas can now be found in Bulwark, near the train station. A large logistics center is located on the outskirts at the exit of the M48 motorway.

The racecourse is one of the premier courses in Welsh horse racing. It is located on the outskirts on the site of the former Piercefield House, of which only ruins remain. On Sundays there is a large market on the premises, which is even supplied by vendors from Birmingham, London, Kent and beyond. Various hobby and antique markets also take place there during the year.

Chepstow has many excellent schools. One of the best known boarding school is that of St. Johns on the Hill, which is attended by boys and girls. It is in the suburbs, towards Tutshill.

Excursion destinations include the nearby Royal Forest of Dean and the Tintern Abbey, 5 km away . The southern end of the Wales Coast Path is in Chepstow.

Many of the city's residents are employed outside of the city, making daily trips to Bristol, Newport and Cardiff.

Sister city is the French city of Cormeilles.