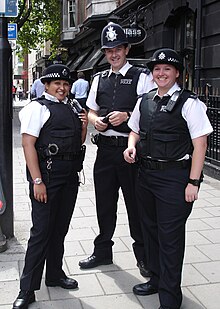 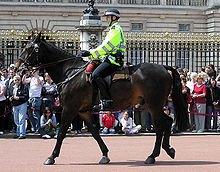 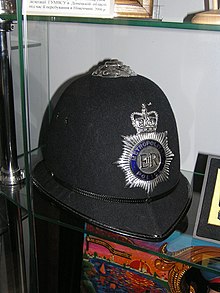 There was no police force in London at all until the middle of the 18th century. Peace and order were magistrates , voluntary Wachtmeister ( constables ), night watchman and - maintained by the military - where necessary. If the victim of a crime wanted the perpetrator to be prosecuted, they could hire a thief taker who earned a living from rewards and bounties.

The writer Henry Fielding was appointed magistrate of the City of Westminster in 1748 . His house at 4 Bow Street had been converted into a courtroom in 1739 by his predecessor Thomas de Veil . Fielding gathered a group of eight trustworthy constables and authorized them to enforce the magistrates' decisions. Fielding's blind half-brother, John Fielding, followed in 1754 as magistrate and transformed the patrol into the first truly effective police force, the Bow Street Runners. In 1798, the Marine Police was established in Wapping , a private security company that patrolled the docks and investigated cargo theft. This police force later merged into the “Thames Division” of the Met and is now the river police.

During the early 19th century, London's population grew rapidly due to the industrial revolution . The system of locally organized police forces turned out to be increasingly inefficient for a constantly growing metropolis. In 1829 the House of Commons passed the Metropolitan Police Act , which placed police in the capital directly under the Ministry of the Interior. Initially, the Metropolitan Police consisted of 1,000 police officers whose job it was to prevent and solve crimes within a seven mile radius of Charing Cross .

The Met remained under direct control of the Home Office until 2000, when responsibility was transferred to the newly created Greater London Authority . The supervision is carried out by an authority called the "Metropolitan Police Authority". This is composed of the Mayor of London and several independent members. The police chief is still appointed by the interior minister.

The Metropolitan Police is directed by a Management Board consisting of the Commissioner, the Deputy Commissioner and the Heads of the Principal Directorates. Sir Paul Stephenson was Police Commissioner until his resignation on July 17, 2011 , when he came under fire for the News of the World telephone bugging scandal . Cressida Dick CBE is currently the Commissioner. In 2017, she became the first woman in the line of previous incumbents.

The Territorial Policing (TP) Directorate is headed by Assistant Commissioner Simon Byrne. It is responsible for everyday work. The area of ​​responsibility of the Metropolitan Police (Metropolitan Police District) is divided into 32 Borough Operational Command Units (BOCU). The division of the police districts is congruent with the city districts. The police districts are headed by a Chief Superindent or Commander (BOCU Westminster). The BOCU are responsible for all police tasks in their district. The TP also reports to the Royal Parks Operational Command Unit and the Safer Transport Command .

The letters in brackets are worn on epaulettes to indicate affiliation, the number indicates the number of officials:

In addition to the headquarters at New Scotland Yard, there are 140 police stations. There are areas that are manned around the clock, those with day duty or those that are only open a few days a week. The oldest police station was on Bow Street . It was established in 1881 and closed in 1992, with the attached Bow Street Magistrates Court remaining until July 14, 2006. The oldest still existing area is that in Wapping. It was established in 1908. This is where the headquarters of the " Marine Support Unit ", which is responsible for the Thames, are located, a morgue and the river police museum. The area in Paddington Green, which has underground accommodation for terrorist suspects, is also known.

In many districts there is still the blue lamp introduced in 1861 for identification. 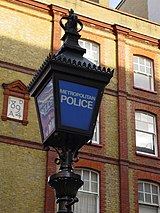 The traditional blue lamp is used for identification in many areas

The districts are staffed differently. Possible occupations are

Many precincts have holding cells. 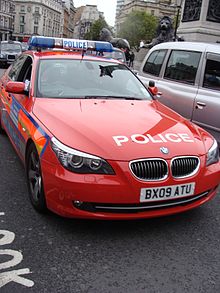 The Metropolitan Police has various specialist groups in the “Specialist Operations” (SO) department, which were formed in 1986 from different departments. Of the original 20 groups, only a few have remained in the course of time.

Tug of war team at the Olympic Games

The Metropolitan Police's tug of war team won bronze at the 1908 Summer Olympics , when three police teams competed for the United Kingdom.