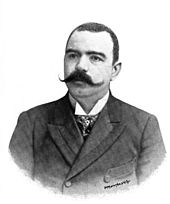 António Teixeira de Sousa (born May 5, 1857 in Celeirós , † June 5, 1917 in Porto ) was a politician from the time of the constitutional monarchy in Portugal . In 1910 he was the last head of government in the monarchy.

In 1883 Teixeira de Sousa completed his training as a doctor at the Medical and Surgical University of Porto (today: Medical Faculty of the University of Porto ). He then worked as a doctor, u. a. also in the army and public service. He was a member of the Regeneration Party and held a number of high public offices towards the end of the monarchy, for example he was finance minister from 1903 to 1904 and again in 1906. He later also headed the Ministry of the Interior. On June 26, 1910, he was appointed head of government by King Emanuel II . The revolution of early October 1910 that ended the Portuguese monarchy also ended his reign.