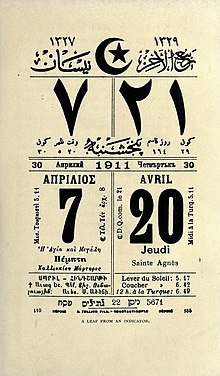 Ottoman calendar sheet from Thursday, April 20, 1911 in various languages. At the top left the date according to the Rumi calendar is given in Ottoman : 7th Nisan 1327 (year after the sun hedge), next to the Islamic calendar : 21. Rabīʿ ath-thānī 1329 (year after the moon hedge). In the field below the Rumi calendar is the date in Greek according to the Julian calendar: April 7, 1911, next to it in French the Gregorian date. At the very bottom, according to the Jewish calendar, is the date in Hebrew : 22nd Nisan 5671. To the left and right of the year 1911, month names and weekday names in Bulgarian , in the field under the Greek dates the same in Armenian .

The Rumi calendar ( Turkish Rumi Takvim , Roman calendar ' ) is on the Julian calendar -based, with the Hijra , the emigration of Muhammad from Mecca to Medina in 622, incipient solar calendar . It was introduced during the Tanzimat period and was valid from 1840 to 1926 in the Ottoman Empire and the Republic of Turkey . The hijra calendar was still used for non-official matters .

As in most Islamic countries, a solar calendar, the Julian calendar , has always been used in the Ottoman Empire for financial purposes , alongside the official Islamic calendar . State revenues were based mainly on taxes on agricultural production, which was linked to the season. The expenses, as far as they were fixed in terms of the calendar, such as wages, were made according to the Islamic calendar. After the year counting according to the Hijra was also used for the Julian calendar, synchronization problems arose from the different year lengths of the Julian and Islamic calendars. To remedy this, a proposal by the Chief Financial Director Hasan Pascha was implemented in 1677, according to which one should skip a year every 33 years from this point onwards in the year counting of the Julian calendar in order to compensate for the difference between the Hijra and Julian calendar. In order to avoid the inconsistency associated with such a missed year, the beginning of the year was brought forward from September to March by order of the finance director Atıf Efendi in 1740, in order to mark the beginning of the Julian year with the Muharram , the first month of the Islamic calendar synchronize.

On March 13, 1840, the Julian calendar, which until then had only been used in financial matters (سنهٔ مالیه / sene-i mâliye  / 'financial year'), introduced as a Rumi calendar as part of the Tanzimat period, also for the official sector. From then on, there was a permanent difference of 585 years in January and February and 584 years for the other dates between the yearly counting of the Rumi calendar and that of the Christian calendar , because in 1871 it was omitted to omit another year in the counting.

On March 1, 1917, the Rumi calendar was changed from the Julian to the Gregorian calendar. February 15, 1332 (Julian Hijra census) was followed by March 1, 1333 (1917) by omitting 13 days. Furthermore, the beginning of the year was moved to January 1st. Thus from then on the years of both calendars ran completely parallel with a difference of 584 years.

At the beginning of 1945 the names of the months Teşrin-i Evvel , Teşrin-i Sânî , Kânûn-ı Evvel and Kânûn-ı Sânî were changed by Law No. 4696 in the sense of the Turkicization of the language into Ekim , Kasım , Aralık and Ocak .