Roger Eliot Fry (born December 14, 1866 in London , † September 9, 1934 there ) was a British painter and art critic . With the planned art exhibition Manet and the Post-Impressionists in 1910, he coined the term post-impressionism and is considered an important precursor of Vorticism . His influence on the Bloomsbury Group , which he had joined in 1910, was significant .

Roger Fry with his wife Helen Coombe, photo around 1897

A room in the Second Post-Impressionist Exhibition (Matisse room), 1912

The son of judge Edward Fry grew up in a wealthy Quaker family in London. After attending Clifton College, he studied at King's College , Cambridge , where he was accepted by the Cambridge Apostles . After his first exams, which he passed in natural sciences in 1887 and 1888, he traveled to Italy in 1891 to study the old masters of Italian art and in 1892 took painting lessons at the Académie Julian in Paris. After further trips to Italy, he specialized in the art of the Renaissance and gave lectures in Cambridge. The acquaintance with the American art historian and Renaissance connoisseur Bernard Berenson took place at this time.

Fry met his fellow artistic student Helen Coombe (1864-1937) and married her in 1896. When shortly thereafter she showed symptoms of a mental illness, she came to a clinic in 1899, which she left after an improvement before she finally in 1910 was admitted to a home. Fry remained connected to her throughout his life and wrote her loving letters.

In 1903, Fry co-founded, alongside Berenson and others, The Burlington Magazine , a scientific journal for art and decoration published in London. From 1904 he was a curator at the Metropolitan Museum of Art in New York . In 1906 he discovered the works of Paul Cézanne during a stay in Paris and turned his interests to modern art. The following year he went back to England and represented the interests of the museum as a “European advisor”. In 1910 he was released after an argument with the museum's director , JP Morgan .

From November 1910, the exhibition Manet and the Post-Impressionists, organized by Fry, took place in the Grafton Galleries, London. The London audience felt shocked and provoked; the press also published absurd misjudgments. Despite these negative reactions, Fry organized a second post-impressionist exhibition in 1912, in which, in addition to contemporary British painting, mainly works by Henri Matisse , the Fauves, as well as Pablo Picasso and Georges Braque were exhibited. It was under the patronage of Lady Ottoline Morrell , with whom Fry had a fleeting love affair.

The fuss about the exhibition did not detract from his admiration for French modernism. On the contrary, it moved him to "turn his back on his real subject, the Old Masters, and devote himself entirely to his own painting and modern art".

In 1913, Fry founded Omega Workshops , a design workshop that included Vanessa Bell and Duncan Grant from the Bloomsbury Group, which he had joined in 1910. He established himself as an art historian and art critic with various publications in the art field and continued to work as a painter. In 1933 he became Slade Professor of Fine Art at Cambridge, but died the following year in London after an accident at his home. 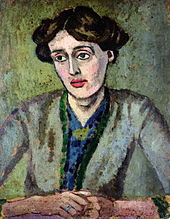 Portrait of Virginia Woolf , around 1917

On July 25, 1940, Virginia Woolf's biography of Roger Fry, the boyfriend she had known since the Bloomsbury period, appeared posthumously on July 25, 1940 , in the Hogarth Press in London , which she ran with her husband, Leonard Woolf .

In May 2010 , the British organization English Heritage had a blue plaque put up in his memory at the house at Fitzroy Sqare No. 33 in the London borough of Bloomsbury , where the Omega Workshops were based .