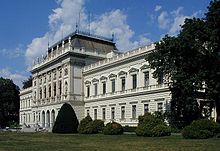 The main building of the University of Graz, in the rear part of which the university library is housed

The Graz University Library ( UB Graz ) is the largest scientific library of Styria , for which they also legal deposit has privilege. It forms part of the Karl Franzens University Graz and consists of the main library, two faculty libraries (for law, social and economic sciences and for theology) as well as various specialist libraries and collections at institutes, but is also open to the public.

Gallery of the reading room

The library of the Jesuit University

The University Library Graz owes its origin to the Counter Reformation . Since 1571 Jesuits were in the predominantly Protestant city ​​of Graz, where they pursued the recatholicization at the request of the Prince Archduke Karl II . For this purpose, a Jesuit college was founded next to the cathedral in 1573 with an attached school, which also had its own library. In 1585 this school was founded by Pope Gregory XIII. confirmed as a Jesuit University, giving the library university library status. It grew rapidly through the addition of books from abandoned monasteries as well as through gifts and purchases. Like the university itself, which essentially consisted of a theological faculty, theology was also the main focus of the library, although it was not limited to Catholic works. The natural sciences were also well represented, which can be attributed to the influence of the mathematician Paul Guldin , who was a professor at the Jesuit University in Graz. This came to an end with the abolition of the Jesuit order in 1773 and was converted into a state university.

In 1775, the University of Graz was officially re-established by imperial decree and taken over into state administration together with its library. However, most of the imperial officials who administered it and the university library were former Jesuits. In 1781 the library was reopened after structural adaptations to its new premises. This made it publicly accessible for the first time. Her biggest problem was the loss of the 28-volume library catalog, which was believed to have fallen victim to the resentment of the Jesuits. He has not been found until today. The increase in books from abandoned Jesuit libraries exacerbated the chaos.

Like many other universities, the University of Graz was downgraded to the status of a lyceum by Emperor Josef II in 1782 . However, the library's holdings continued to grow.

Detail from the facade of the extension from 1994–96

On April 19, 1827, after 45 years, the old rights were restored by Emperor Franz I. Since then, the university has been named Karl-Franzens-Universität Graz after its two founders. Since the rebuilding of the university was linked to the condition that the state did not incur any additional costs, the university library continued to rely on bequests and donations for its collection. Only when the number of employees increased from three to six in 1870 and the endowment increased from 830 to 4,000 guilders was the library able to fulfill its tasks for the first time in a long time.

From the move to the end of World War II

Due to the limited space of the university in the inner city of Graz, a new building was started from 1891 on the outskirts (in today's Geidorf district ), whereby the individual buildings were put into operation at different times. The library moved from September 9 to 22, 1895 with 135,000 volumes in the main building of the new university. In 1914 the administration wing bordering the north-eastern side of the central reading room was extended. The further development of the library suffered setbacks in the increase in inventory and administration due to both world wars. To protect against the air raids on Graz, 60,000 volumes were relocated in 1944. It reopened on October 22, 1945. 4,500 volumes (including 200 manuscripts) fell victim to the Second World War.

The second half of the 20th century is mainly characterized by structural changes and increasing decentralization. In 1950, the two close-up magazines behind the narrow sides of the reading room in the southeast were supplemented by a large magazine extension. In 1970 the library in the north-west received an extension with an entrance hall and direct access from the outside. From 1994 to 1996 the ReSoWi center was built, which houses the law, social and economic faculty library belonging to the university library. At the same time, a large extension to the main building was built, which is exclusively available to the university library. In addition to the expansion of the main library, specialist libraries that are physically distant were also built, for example in the Wall University Center in Merangasse. In 1996 a media library for audiovisual media was set up. As a result of the division of the university, the previous medical sub-libraries became an independent university library in 2004. Together with the Innsbruck University Library and the Vienna University Library, the Graz University Library took the lead in the formation of national and international consortia for the more cost-effective shared use of electronic journals and books. Between July 2005 and June 2008 the “Cooperation E-Media Austria” was set up at the Graz University Library. Graz University Library is also heavily involved in the Austrian Literature Online project for the digitization of Austrian literature. Comprehensive renovation work began in spring 2017 under the motto “UB will be new”. The extension from the 1970s was demolished and instead a two-story complex was built, which opened in September 2019. In addition to learning and seminar rooms, this also offers a children's room and a "24/7 learning zone" that is accessible around the clock.

When it was taken over by the state, the university library had two employees (the director and a library clerk). At the beginning of the 20th century, the staff consisted of 17 people, eight of whom were scientific officials. At the turn of the millennium, the library employed 120 people. 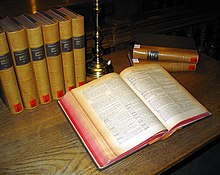 A multi-volume Latin dictionary from the Graz University Library

The book inventory of the older university library is historically uncertain. For 1773 there is an indication of 10,000 volumes, for 1776 another of 42,000 volumes. Later, according to other, probably just as unreliable sources, there were again fewer and in 1839 it was already 50,000 volumes. A census in 1860 resulted in a stock of around 38,000 printed (partly multi-volume) works. 100,000 volumes were reached around 1879, and 200,000 in the first years of the 20th century. At the turn of the millennium, the entire holdings of the Graz University Library comprised almost 3 million printed volumes, over 2000 manuscripts, around 1200 incunabula , numerous scholarly bequests and around 1400 current journals.

The department for special collections manages the manuscripts and all works printed up to 1900. Among the most notable parchment manuscripts are the five oldest Georgian manuscripts from the 7th to 11th centuries. They come from the St. Catherine's Monastery at the foot of Mount Sinai . The most important paper manuscripts include letters from Johannes Kepler to Paul Guldin.

42 papyrus manuscripts from Oxyrhynchos and Hibeh also deserve mention. They come from excavations carried out by the British Egypt Exploration Society between 1896 and 1907 and came to Graz in return for financial support for the excavations by the city. Most of the finds are now in the Ashmolean Museum in Oxford , the British Museum in London and the Egyptian Museum in Cairo .